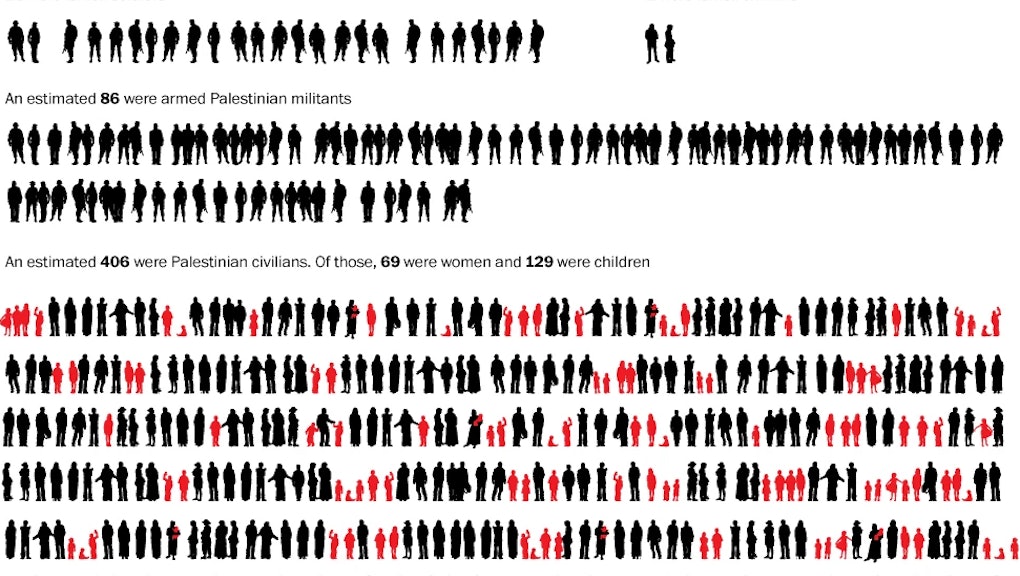 One Chart Captures the Harrowing Cost of the Gaza Conflict

The news: This chart from the Washington Post shows every person who has died in the current escalation in the Israeli-Palestinian conflict as of July 21. Even though the tolls have tragically risen to at least 639 Palestinian and 31 Israeli deaths — meaning that 147 Palestinians and four Israelis have died in the past two days of fighting — what this chart still clearly shows is that the lion's share of the casualties were Palestinian civilians. According to the Palestinian Center for Human Rights' data, more than 25% of them were children.

Why are so many kids dying? Gaza is one of the most densely populated urban areas in the world, packing 42,600 people per 17 square miles. Over 85,000 Palestinians have already been displaced, meaning that many civilians have been crammed into even smaller spaces.

Hamas is indeed very guilty of stockpiling munitions and fighters in civilian areas, but Israeli forces often target them anyways, after notifying civilians to clear out. Current military technology simply isn't capable of precision targeting accurate enough to avoid civilian deaths when bombs go off and rounds go flying, and both Hamas and Israel have aggravated the situation by pretending civilian deaths are an inevitable consequence of a brawl between the two parties. The result is that Gaza's civilian population has taken the brunt of the invasion.

As the ground invasion intensifies, though, Israeli tactics are drawing serious criticism. A New York Times correspondent questioned a blast in Khan Younis on Monday that leveled a four-story house and killed 25 members of four families, including 19 children. President Obama also said the U.S. has "serious concerns about the rising number of Palestinian civilian deaths." Meanwhile, Secretary of State John Kerry was caught on camera somewhat sarcastically referring to the Israeli incursion as a "hell of a pinpoint operation."

But it will probably continue: The dominant media narrative is still largely uncritical of Israel and Americans strongly support the Israeli invasion of Gaza. Israelis themselves, whose opinions matter much more than Americans', seem mostly for it. So despite more rebuke from the international community than in years past — particularly from American political leaders — there's little pressure on Israeli forces to ease up on the heavy-handed tactics being used in Gaza.