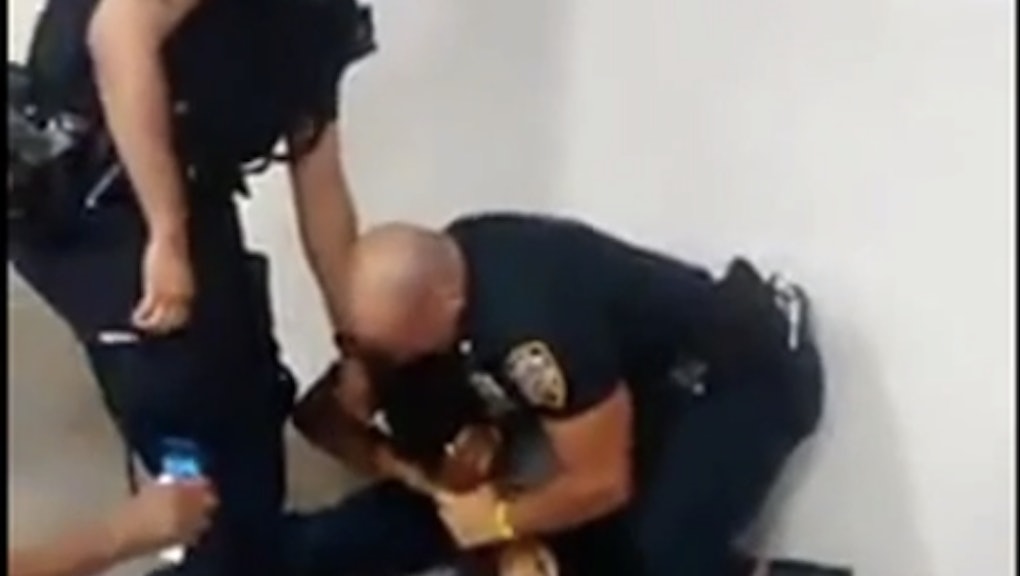 The news: There are no words for this video of a uniformed NYPD officer brutally choking and beating down a handcuffed black man, which has been circulating online since it was recorded on July 14 at the 125th & Lexington subway station in East Harlem.

This vicious behavior by the unnamed cop isn't just horrible — it's potentially criminal. Police Commissioner Ray Kelly ordered the department's officers to stop choking suspects in 1993 after the tactic was blamed for a string of deaths in New York and across the nation. But the video clearly shows a policeman not just choking the man into submission, but also punching him repeatedly in the face at the same time. As horrified onlookers yell at the officers involved, blood drips from the suspect's face onto the white tile floor.

This is the second time in recent weeks NYPD officers have been caught using chokeholds on suspects. Eric Garner, a 43-year-old asthmatic father of six, died earlier this month after NYPD officers attempted to arrest him for illegally selling cigarettes. An onlooker captured a video of a policeman choking Garner as he insisted he could no longer breathe. The NYPD was fast to downplay the role of excessive force in Garner's death, but four medical personnel were quickly suspended without pay.

The 1993 chokehold ban is a "no exception" rule, applying even when officers were facing difficult-to-restrain suspects. It is intended to save lives and prevent officers from unnecessarily killing someone. Not only was the order absolute, it was very clear. "Basically, stay the hell away from the neck," said Chief John F. Timoney. "That's what it says."

But NYPD officers are still pretty much scot-free to choke suspects whenever they want, because they're never punished when they illegally strangle people. The New York Times reported on Monday that of the 1,022 chokehold complaints officially lodged against officers from 2009 to 2013, investigators found that only nine had enough "evidence to back up the complaint." Of those nine, only one resulted in actual punishment — a command discipline that resulted in a measely loss of vacation days. A single case in 2014 may result in criminal charges.

The chokeholds are bad enough, but the problem runs much deeper. The officer whose brutal use of force appears to have killed Garner had two previous civil rights suits filed against him, but was still allowed on patrol. In November 2013, reports by the Civilian Complaint Review Board found that the NYPD is actually punishing a declining share of substantiated complaints. Nationally, numerous incidents of police brutality have been documented in just the past few months.