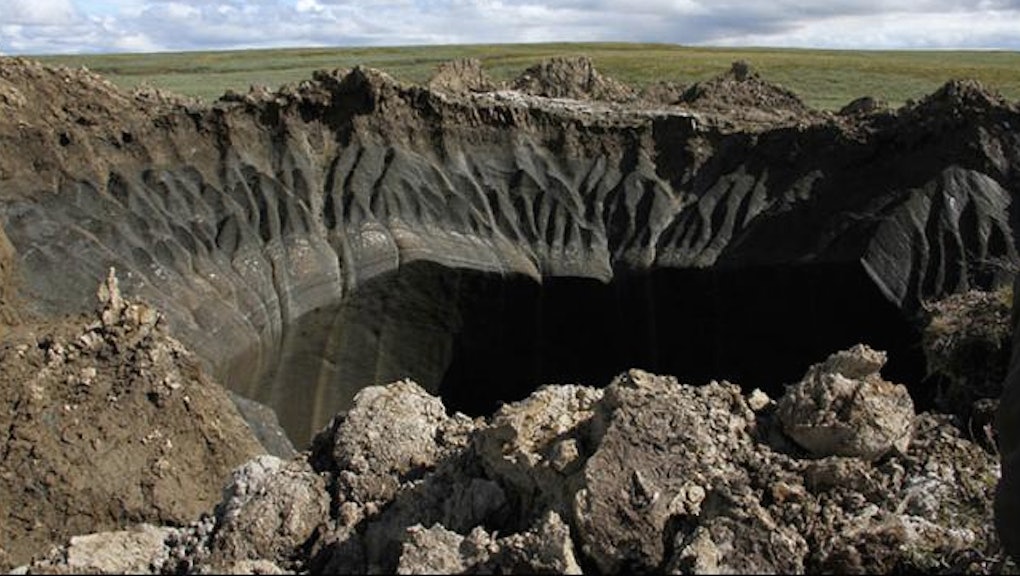 The news: It turns out that gigantic black pit recently discovered by oil workers at "the end of the world" in Siberia several weeks ago might indicate a bigger problem than we previously thought.

Two more chasms have been uncovered by environmental scientists, leading experts to believe they're part of an alarming trend tied to global warming.

The explanation: Siberian permafrost contains a deep, frozen mixture of salt, sand, gas and water that has laid largely undisturbed for around 11,000 years. As the Siberian peninsula warms, the permafrost is beginning to thaw. As the gas mixes with salt and water (as well as salty sand), the result is a volatile mixture that builds pressure until it ejects out of the ground with massive force. The Siberian Times reports this is the generally accepted theory.

The actual emissions themselves wouldn't be very dangerous, since they occur in pockets of chilly wilderness far removed from human settlements. But, they're a symptom of the larger problem: the release of large quantities of gaseous carbon dioxide and methane into the atmosphere as the process unlocks gas trapped underground for millennia.

A similar but less dramatic theory suggests that the holes are the result of pingos, giant formations of earth-covered ice. Pingos form when liquid groundwater is pushed upwards through cracks in the permafrost, freezing near the surface. When they melt during warmer months, the result is a big hole. This theory has gained some credence thanks to flowing water found at the bottom of the first hole in Yamal.

In either case, the underlying cause is the same: rising Siberian temperatures resulting in subsurface melting.

Why you should care: Melting permafrost releases large amounts of methane, a greenhouse gas 20 times as potent as carbon dioxide.

Eventually, the permafrost will release its payload. National Snow and Ice Data Center scientist Kevin Schaefer explains that the process could result in a "tipping point" where the permafrost releases more greenhouse gases than it is able to absorb. It won't necessarily lead to runaway global warming, but there would be a gradual and significant climb in worldwide temperatures.

On top of that, many environmental scientists expect the Arctic to flip from a carbon sink to a carbon source around the end of the century. The implications are not yet fully understood, but this is anything but good news for a world that is already rapidly warming.