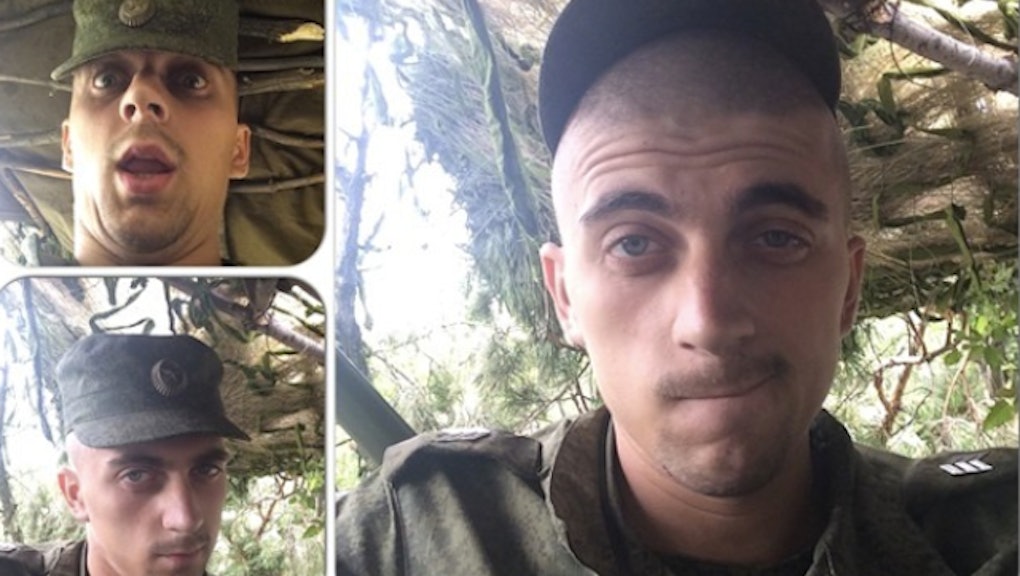 Sotkin, who Seddon believes to be a Russian military communications expert, posted photos that Instagram geotagged near several major engagements between Ukrainian and Russian forces.

The photos: Seddon says that this photo was transmitted from a Russian base on June 23, right around the time a Russian military buildup coincided with alleged cross-border missile and rocket fire.

Photos also placed him near Krasna Talychka, in Ukrainian territory currently controlled by the pro-Russian insurgents fighting for secession.

He also posted this photo from Krasnyi Derkul on July 5, coinciding with what appears to have been scattered fire from rebels in the region.

Here's the Instagram map of those photos, which indicate locations several miles into Ukrainian territory.

Here's where Sodden's story goes a little off the rails. Malaysian Airlines Flight MH17, shot down on July 17 and leading to the death of all 298 passengers and crew over eastern Ukraine, is widely believed to have been shot down by an SA-11 or similar missile system operated by the pro-Russian insurgents in the area. Russians refer to the anti-aircraft platform as the 9K37 "Buk." This photo, added on July 27, shows Sotkin in what looks like a military vehicle and is captioned, originally in Russian, "sitting around, working on a buk, listening to music, basically a good sunday."

Sodden explains how "to operate a Buk, the rebels would have needed trained communications specialists like Sotkin to operate a sophisticated radar station, which can be stationed independently of the surface-to-air missile launcher." The BuzzFeed article more or less links Sotkin's social media posts to the destruction of MH17. He also connects the posts to Ukrainian claims that Russia shot down two Su-25 ground attack planes in the past few weeks.

The only problem? It's more or less an open secret at this point that the Russian military is trading fire with the Ukraine, but a smoking gun of Russian infringement on sovereign Ukrainian territory this is not. This is really shoddy evidence. The Russian word "buk," for example, can refer to a laptop computer — which a Russian military communications specialist would be using.

Meanwhile, while Instagram's geotagging tool seems pretty accurate to Western journalists who mostly work in big cities, whether it is as accurate in rural regions of eastern Ukraine is uncertain. The selective zoom used on the map is misleading as well, making it look like the alleged geotag was further into Ukrainian territory than it really was. Here's what that looks like zoomed out.

Eh. It's really equally as likely that the photo was posted from somewhere nearby as it was from inside Ukrainian territory, seeing that the distance between the northern and southern half of the peninsula there is just around 4.4 miles.

Sodden also doesn't clarify why a communications expert whose job can be done remotely would be deployed directly into the Ukraine. It also seems really weird that a Russian military expert would brag on social media about operating the same kind of missile platform recently used to shoot down a civilian airliner while on a secret mission inside Ukrainian territory. Most of the photo captions were pretty banal ("I still don't understand what we're doing here, so we're continuing to go slightly crazy, listen to #swedishhousemafia and wait for new news from Ukraine!"), suggesting that this is a dude getting really bored of sitting on the Ukrainian border rather than someone actually involved in combat operations.

One thing is clear, though: Sotkin is really good at selfies.