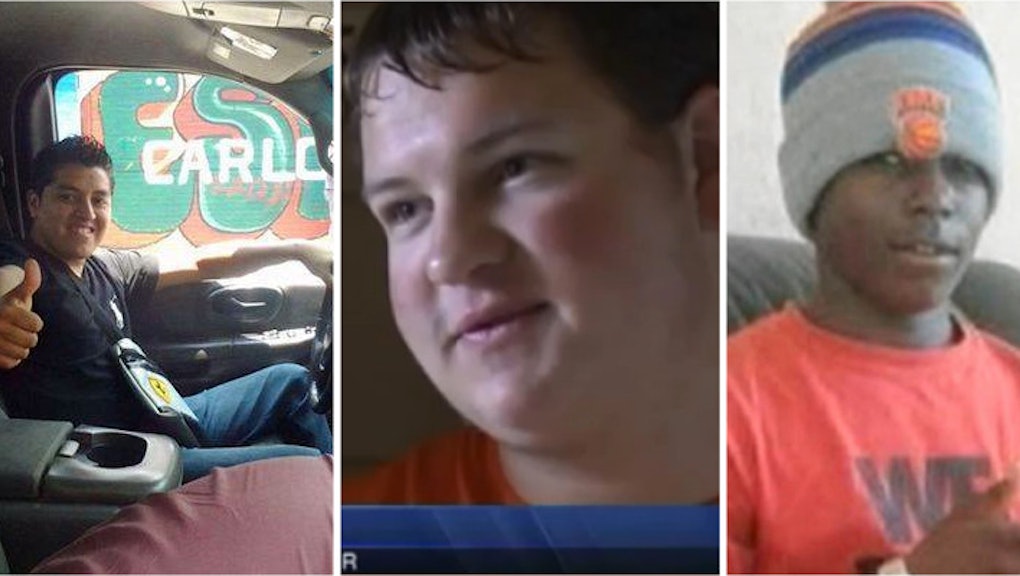 Guns should not be in the hands of just anyone. If you, and the NRA, needed more proof of that, just turn to the three gun-related incidents that resulted in two untimely deaths and one unsavory interaction all occurring within the past week. Listen up gun-toting folks — this is for you.

The cases: First up is a selfie gone wrong. Mexico City resident, Oscar Otero Aguilar, was drinking with friends over the weekend when he pointed a loaded 0.45 caliber gun toward himself as he was posing for a Facebook selfie. The gun was then discharged, hitting him in the head. Police were quickly called to the scene, but soon after their arrival Aguilar was dead.

Next, there was 13-year-old Florida boy Darren Booker. On Sunday, Booker was playing with friends when an unnamed 15-year-old began using a firearm for a game of Russian roulette on the kids. The older boy had removed all of the ammunition from the gun except for one bullet and after two empty fires aimed at Booker, the third shot hit Booker in the chest and killed him.

Lastly, 18-year-old Steve Lohner filmed his recent encounter with local cops. According to Raw Story, Lohner was "toting a loaded shotgun on the streets," in Aurora, Colo., where the 2012 theater shooting that claimed 12 lives and injured 58 occurred. In the video, Lohner carried a Stoeger P-350 12 gauge shotgun "for the defense of [himself] and those around [him]," and invoked his Second Amendment rights to justify his actions. The teen claimed that he was openly carrying his weapon "to make the public feel more 'comfortable' around guns."

The NRA's campaign: The three scenarios also involve fairly young men, which means that the NRA's campaign to get guns into the hands of younger generations is working. The campaign, called "Everyone gets a gun," was released by the NRA on July 21 and the events of this past week show how their message has seeped into North American culture in the most abominable way.

According to the NRA, gun policy should allow everyone to arm themselves so everyone's lives would be protected and essentially "better." Hosted by Billy Johnson, an NRA news commentator, the above vignette is part of the organization's mission to diversify their audience and attract young supporters. In light of the string of improper gun use, the NRA is furthering their pro-gun agenda, showing just how dirty their hands are when it comes to infecting young people's minds.

Time to reassess: In early June, the NRA posted a statement on their website saying, "A small number [of people] have recently crossed the line from enthusiasm to downright foolishness," loosely referencing publicity stunts in Texas where gun enthusiasts were bringing weapons into Starbucks and Chipotle to promote the open carrying of firearms.

If the organization believes that walking into food establishments with your weapon in tow is foolish, then they should be rethinking their "Everyone gets a gun" campaign as well. The NRA's pro-gun ideology is distorting young, impressionable minds about firearms. Guns are no game and certainly no joking matter. And no, not everyone should have guns. These three recent incidents alone demonstrate improper gun handling is out of control.