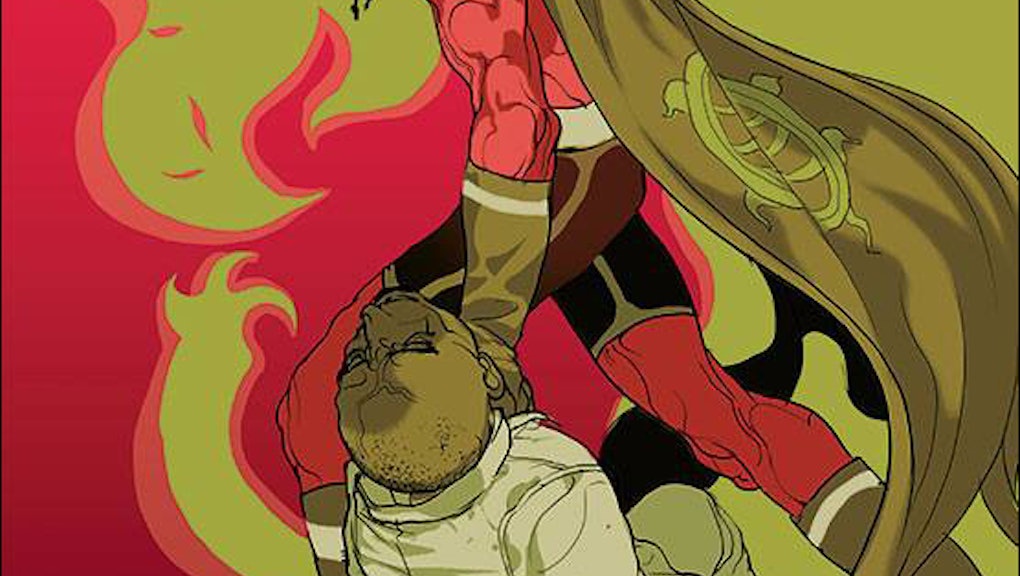 Not the toughest name for a crime fighter, plus his costume leaves little to the imagination:

But make no mistake: The man will hurt you.

And according to Angry Asian Man, he's the first Asian-American superhero in the history of global comics, first debuting in Blazing Comics in 1944.

Background: The Turtle now appears in The Shadow Hero, a new graphic novel by Gene Luen Yang and Sonny Liew.

Its publication has also inspired promotional art from 27 commissioned illustrators, which Angry Asian Man compiled as a list. The results are nothing short of glorious:

The legend: Author Gene Yang tells of the character's genesis on his website:

According to his account, a small publishing company called Rural Home enlisted Chu Hing, a Chinese-American artist, to create a new superhero in 1944. The result was the Green Turtle, a masked crime fighter who stalked the streets of Chinatown in the 1930s.

There was just one problem: Hing wanted the hero to be Chinese-American. The publisher wanted him white.

So, in a clever act of defiance, Hing responded by rendering the Turtle with his face hidden as often as possible – thus enabling him to "imagine his hero as he originally intended, as a Chinese American":

The comic was canceled shortly thereafter.

But: Those trademark calf-boots and spandex undies were unleashed once more on an unsuspecting public on July 15.

The fact that the Turtle was never given a "proper origin story" left his character open to interpretation. The Shadow Hero colorfully reimagines him as Hank Chu, a young Chinese-American who "wants nothing more than to work in his family's grocery store" but whose mother "has more ambitious plans" for him, according to Yang.

At its core, the author says, The Shadow Hero is really about the immigrant experience in America:

"Take at look at Superman," he writes. "His parents sent him to America in search of a better life. He had two names, one American (Clark Kent) and the other foreign (Kal-El). He wears two sets of clothes and lives in between two cultures. He loves his new home, but a part of him longs for his old one."

It's a story as old as comic books themselves.

And paired with Muslim heroine Kamala Khan's introduction to the Marvel universe, fans should take heart that the Green Turtle has been resurrected to inspire a new and more diverse generation of readers.