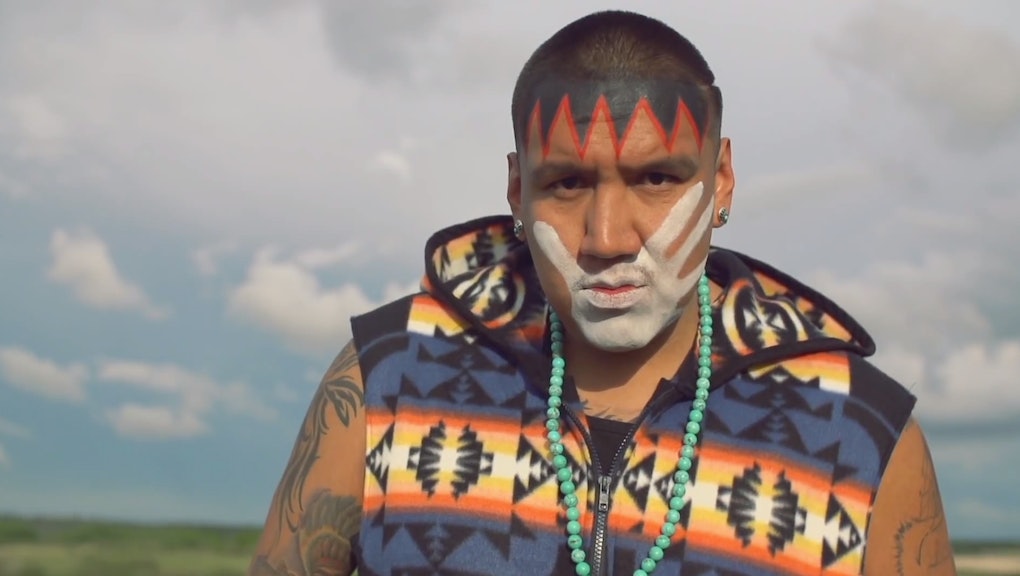 Native American Rap Is the Most Authentic Rap We Have Today

In the opening shot of "Warpath," someone paints a white hand over aboriginal rapper Drezus's mouth. That's a symbol for white European oppression — it's a symbol for why Drezus raps in the first place. He's not the only one: Drezus is only part of a growing movement of Native American and Native Canadian rappers who are providing voice for one of the most marginalized groups in our society. And in the process, they're making the truest hip-hop we have.

"We are overlooked," Drezus explains, "Our people are overlooked and we are the people of this land and we're treated as if we're nothing … [This song is] kind of like a roll call for Native men of who we are and what our roles are as men. It is to ignite a spirit in all of us."

If his language sounds familiar, that's because it aligns perfectly with the original goals of hip-hop in the black American community. According to 1970s hip-hop originators like Afrika Bambaataa and DJ Kool Herc in the Bronx, the purest hip-hop seeks to achieve 5 goals. It should "educate … provide a safe haven spread our message of love, peace and unity … assist others in developing careers and opportunities ... preserve the culture." And since most rappers in the American mainstream — regardless of their race — are now more interested in tearing each other down to secure their spot in the limelight, that leaves Native-American rappers to take up the mantle of classic rap.

"Original hip-hop was uplifting and positive," explains Red Cloud, a Native rapper based out of LA who is half of the group Lightning Cloud. "It gave somebody hope and changed people's lives. It was street poetry that anybody could relate to. Now, people are rapping about things that your average person can't relate to — the cars, the diamonds, the money. I rap about average person stories, issues that people don't usually deal with. I want to let them know what’s going on."

Like many Native rappers, Red Cloud has faced incredible hardship in his life and uses his music to advise his listeners. He was born to a gang-affiliated family in Hawthorne, CA; he got his first tattoo at eight months old. He was an active gang member by the 7th grade, a product, in part, of mainstream gangsta rap. But when Red Cloud found old-school hip-hop, he realized there was more to music and life than guns and drugs. Now, he uses his music to empower trapped Native youth to choose a different kind of life, too.

Crow Nation rapper SupaMan, who was named Artist of the Week by MTV's Iggy blog earlier this year, felt similarly betrayed by the lack of authenticity of mainstream hip-hop, so he started making his own music to uplift his people. He believes that Native Americans are in a unique position to spread the real gospel of hip-hop. "Native Americans grasp that culture of hip-hop because of the struggle," he said in an NPR interview, "Hip-hop was talking about the ghetto life, poverty, crime, drugs, alcohol, teen pregnancy; all that crazy stuff that happens in the ghetto is similar to the reservation life. We can relate to that."

He's right — many of this country's Indian reservations are some of the poorest regions of our country. Residents suffer from rampant alcoholism, high school dropout rates that are twice the national average and debilitating political corruption. Supaman tries to capture these stories and reach out to people who maintain some hope. "I pray for the ones that's listening right now / Struggling, feeling like giving in right now" he raps on "Prayer Loop Song," "I pray for you / Pray that you come back home / Pray that you understand that you're never alone."

As it did for black Americans in the 1970s, hip-hop offers marginalized Native rappers a new voice in the mainstream culture. That's why other Native rappers like Frank Waln see hip-hop as a kind of PSA about state of Native American life in this country. "There are people who aren't even aware that we exist in real life," he said in an interview with the Chicago Tribune. "They go to museums and see exhibits about Native Americans and think we're a people of the past. But we're a people with a past, not of the past."

In that respect, he sounds a lot like the famous black rapper from the '80s — Chuck D —who described hip-hop as the "CNN of the ghetto." He meant that hip-hop offers those excluded from culture a chance to tell their stories. He meant that it empowered them through knowledge to rise above.

That's what the music coming from today's Native rappers does. It has all the urgency that made old school hip-hop so invigorating, and it offers a refreshing alternative to the increasingly staid cult of radio hip-hop. This music is not concerned with designer fashions, designer drugs or the precise shape of a good-looking woman's ass. And neither was old-school hip-hop. Take it from the rappers who know best why we rap in the first place.