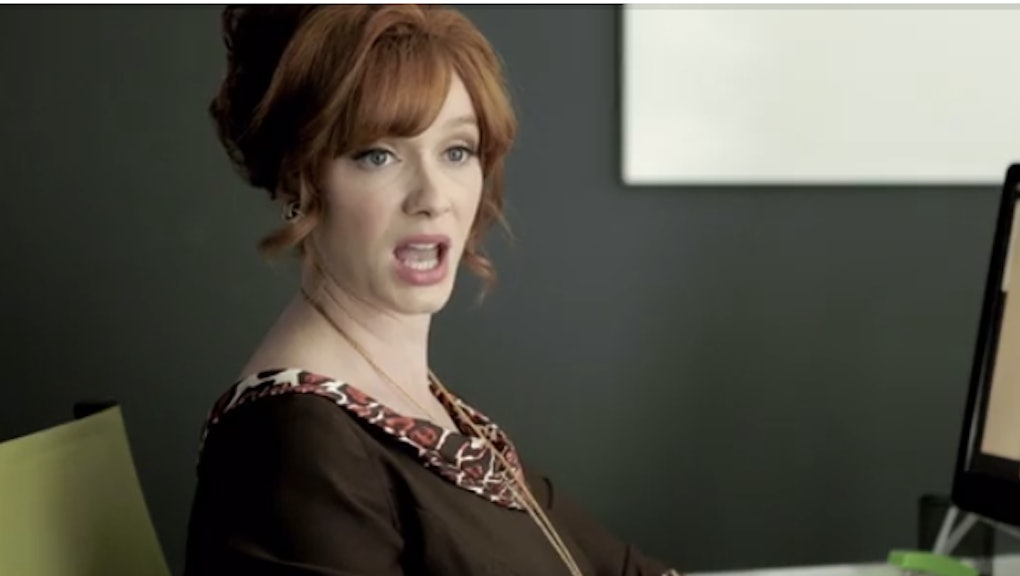 Wouldn't it be weird if we still smoked indoors, day drank at work and used fax machines to communicate with the outside world? In countless ways, our offices have become more modern, and yet, when it comes to women's salaries, we're still largely stuck in the Mad Men era.

In an attempt to highlight the disconnect between the progressive nature of our office with the wage gap, Mad Men's Christina Hendricks teamed up with Funny or Die for a parody that's funny because, well, it's true.

After attempting absurdly outdated office practices like erasing typos on her computer screen with a pencil eraser, the Emmy-nominated actress pivots to point out some of the vast disparities that still exist between men and women in the workplace, including the fact that women still get paid 23% less than men.

Indeed, despite many wage gap campaigns and Sheryl Sandberg's well-intentioned "ban bossy" effort, that figure hasn't changed in over a decade. Moreover, although an overwhelming majority of CEOs are male, 70% of minimum wage workers are women.

Females are also still ghettoized in low-earning jobs, like secretary or administrative assistant, 96% of whom are women. Mad Men is entertaining until you realize it's not far off from the reality we still live in today.

As Hendricks concludes in the Funny or Die video, "If we're going to run our business like it's the 1960s, I'm going to act like it." Maybe she's on to something there.