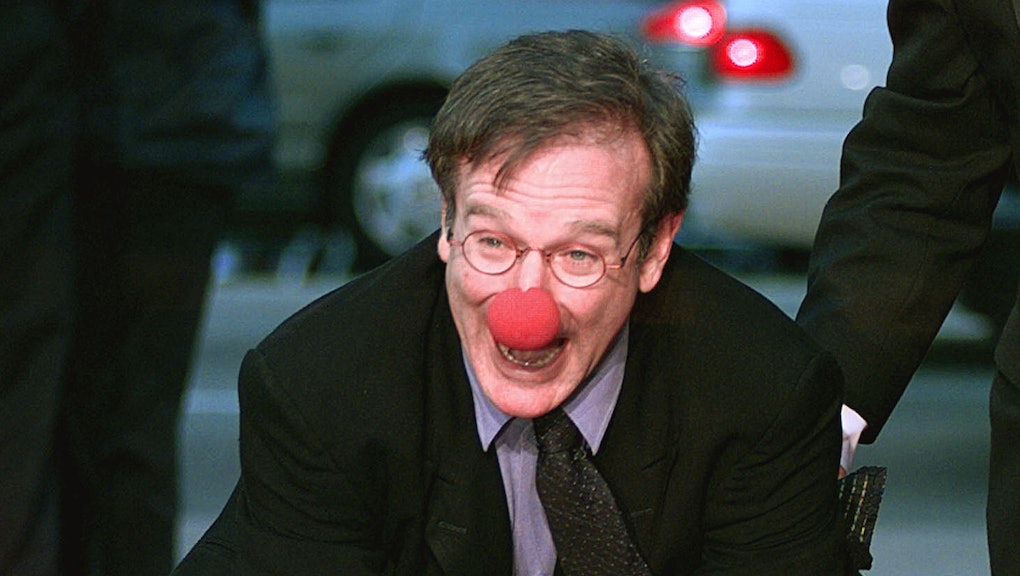 When It Comes to Our Favorite Comedians, Funny Doesn't Always Mean Happy

Following the news of the death of Robin Williams Monday night, fans around the world mourned one of America's funniest and most impassioned actors. But much of this grief was tinged with disbelief: How could someone who appeared so cheerful want to take his own life?

That's really not the question we should be asking.

Depression, as James Rhodes points out in the Telegraph, is "like being forced to wear a cloak made of lead. You don't get to choose when to put it on and take it off. It is a second skin which gradually seeps into your own, real skin and poisons it until you are a walking, toxic, corrosive bundle of infectious awfulness." In this context, suicide can be seen not as an option but an escape route, "the only chink of light at the end of the tunnel."

Williams reportedly once made an audience member laugh so hard she was rushed to the emergency room with a hernia, but his own life was marked by a well-documented, years-long battle with drug and alcohol addiction. So why did his alleged suicide take the world by surprise?

Although it may seem counterintuitive to the layman, scientists have suggested that jokesters may be particularly vulnerable to mental illness. Research conducted earlier this year on comedians from the United States, Canada and Australia showed that they are likely to display characteristics found in bipolar and schizophrenic patients.

The link between creativity and mental illness has been proposed before, but this study specifically looks at the way psychosis can unleash humor. Researchers suggested that "manic states" may even help with comedic development for some.

"The comedians in this study rated themselves highly on divergent thinking, the ability to make connections between seemingly unrelated concepts," said James McCabe, senior lecturer at the Institute of Psychiatry in London. "Humor theorists deconstruct jokes to work out what the elements are of successful or funny humor. According to this theory, the juxtaposition of ideas from different mindsets are at the root of what people find funny about the joke."

This is not to say that all artists suffer from mental health problems. Seth Meyers, asked about the "tortured artist" trope on Tuesday, said, "Look, not everyone's had perfect lives, but there's so many people that I've worked with who come from the most lovely, caring families and that makes them the most lovely, caring people." This is a really important point, and one that should temper any attempt to perpetuate a generalization. "I don't know if I completely buy into that comedy has to come from a dark place," Meyers noted.

But while the ultimate source of comedy may still be up for debate, our need to discuss the continuing stigma surrounding mental health isn't. Suicide remains the most frequent cause of death for males under the age of 35 in the United Kingdom, and the second leading cause of death for American males age 24 to 34. It takes more lives than car accidents in the United States. For a killer that claims so many lives, we still know very little about how to prevent it.

America's Founding Fathers named "the pursuit of happiness" as an essential right in the Declaration of Independence, yet the key to a pleasurable life still eludes many of its citizens. Happiness is a paradox: The more you chase it, the more it escapes you. Research suggests that the happiest states can also have some of the highest suicide rates, reinforcing the idea that being around happy people when miserable can make an unhappy person feel even worse. And yet we still operate under the assumption that people can think themselves happy and healthy.

This emphasis on positive thinking, which frames depression as some kind of character flaw, only makes the stigma against mental illness stronger, which prevents people who need treatment from ever seeking it out.

For Williams, at least, humor was a temporary gateway to happiness. "You look at the world and see how scary it can be sometimes and still try to deal with the fear," he said in 1989. "Comedy can deal with the fear and still not paralyze you or tell you that it's going away. You say, OK, you got certain choices here, you can laugh at them and then once you've laughed at them and you have expunged the demon, now you can deal with them. That's what I do when I do my act."