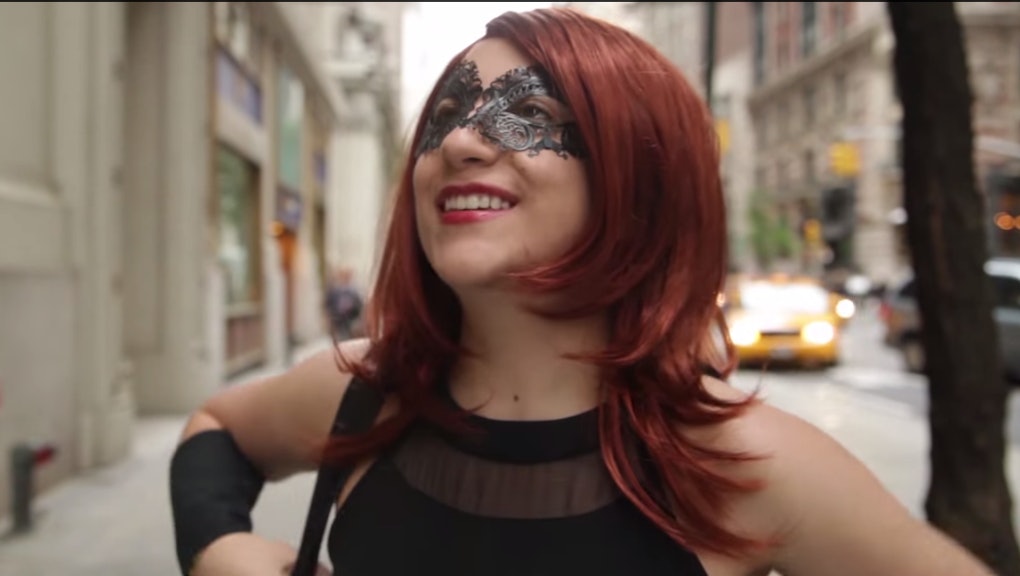 With Iron Man, The Avengers, Captain America and most recently Guardians of the Galaxy, Marvel Studios has had one superhero movie success after another. But their blatant lack of a female superhero headliner has become far too obvious to ignore, and it's led to debate across the media and in fan communities. Marvel president Kevin Feige has awkwardly dodged the issue for almost two years, and audiences are no longer buying the excuse that Marvel's plate is just too filled with other ideas.

Enter "The Adventures of Angelfire," written by Jordan Zakarin and directed by Jeff Kornberg, which satirizes the thinking behind why no female superhero exists yet in the modern Marvel movie world. The short film realistically spoofs how a Hollywood pitch meeting about a movie with a female superhero would likely go down. It sheds light on the resistance to seeing a female superhero save the world without, gasp, the help of a man.

Ali Vingiano plays superhero Angelfire, who comes up against the deep fear and sexism that have kept women from taking charge on the superhero screen. When Angelfire tries to make a producer notice the striking pattern in Batman, Superman and Iron Man, he replies, "Yeah, all the market is in China." One producer wants to call the hypothetical female superhero series Justice Is a Bitch, while the other makes gestures to suggest that they would need a heavy-breasted woman to play the lead.

When a producer accepts a pitch from a pizza delivery man in 10 seconds flat, Angelfire is still sitting in his office, trying to convince him not to sexualize and objectify a female hero.

In an interview with Mic, Zakarin said they conceived of and shot The Adventures of Angelfire before the conversations about women superheroes grew as loud as they are now.

"Women have successfully led films for years, in all different genres, so the idea that they couldn't lead superhero films is remarkably unfounded," Zakarin told Mic. "Angelina [Jolie's] Maleficent made $500 million worldwide, which is the same as what the new Spider-Man made, so it's a silly argument to say that the global audience won't buy women as leads, either."

"Marvel and DC both have some marvelous female superheroes; Black Widow in the Avengers is just one of them," said Vingiano, who plays the superhero and is the cocreator of the short. "They have a great history of kick-ass and smart women, complex characters that are compelling for the things they say, not just the way they look. It's just a matter of getting the guts, we suppose, to give them their own movies."

With glimpses of Gamora's brilliance in Guardians of the Galaxy, as well as a string of intelligent, competent and popular (though non-powered) supporting characters like Pepper Potts, Maria Hill and Peggy Carter, the lack of leading female superheroes now trails Feige everywhere he goes. Even Forbes wrote this after the $94 million opening weekend of Guardians of the Galaxy, an obscure title in Marvel's catalogue: "It means that Marvel can do whatever it wants now. So if they choose not to make a female-centric or minority-centric superhero film, it's because they just don't want to."

Feige has continued to sidestep the issue by saying that the timing is not there yet. Marvel writer Nicole Perlman also confessed that she started developing a Black Widow story, but it has been shelved for now.

Marvel has announced dates for all their slated movies until 2019, though without names to go with them, none is sure to feature a female in the lead. Feige has responded to the pressure head on, telling Screen Crush, "We're not going to be swayed by the backlash. We're going to keep bringing the movies out the way we envision it and the way we believe in it — and that includes diversity in all of the active films."

All hope is not lost, as Sony announced it may be launching a female superhero movie for a 2017 release.

We may not have seen the last of Angelfire too; the last shot suggests that she might be saying hello to Kickstarter.