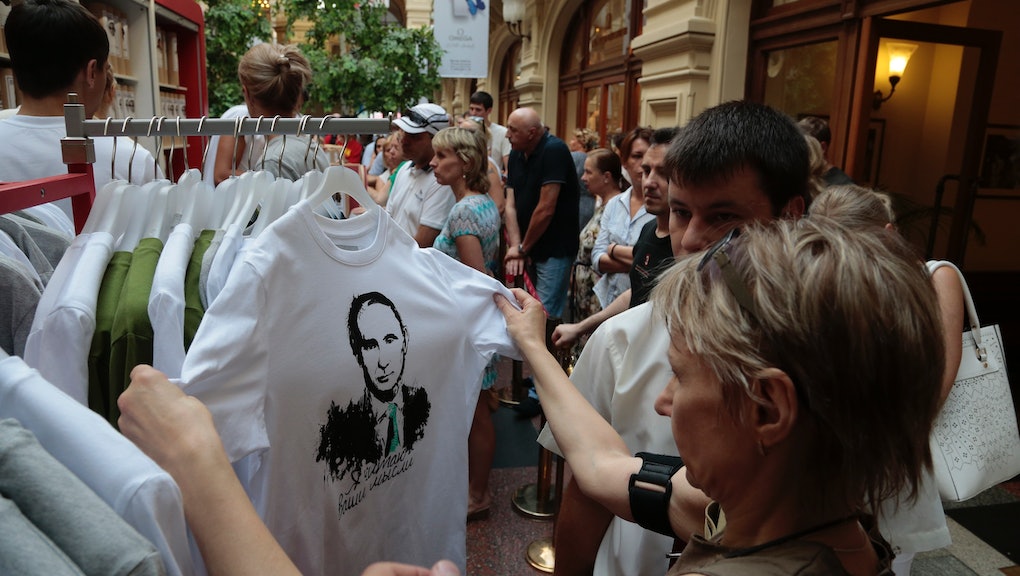 For all your Vladimir Putin T-shirt needs, head on over to Moscow. Just expect to wait in line for a few hours.

According to BBC News, Russians lined up for a chance to buy shirts from a clothing line called Vsyo Putyom, which includes shirts of Putin in various poses and situations. It doesn't seem to be an ironic adoration, either. As one buyer told a BBC reporter, "I will travel with it as if I am traveling with part of my motherland."

Not just Russians: After BBC News is done interviewing that woman, they talk to another person who just purchased a T-shirt. Because our universe bows at the throne of chaos, it turns out it's actor Mickey Rourke.

The movie star, who you might know from The Wrestler, Sin City and Iron Man 2, turned out to buy a Putin shirt too. Not to make any statement, mind you — he doesn't "give a fuck about politics" he told TMZ — but instead because Putin is, well, polite to him?

"I met him a couple times and he was a gentleman — a very cool, regular guy," he told BBC News. "He looked me right in the eye."

Here's the thing: Putin is not a regular guy. Even without all the political baggage, the dude still controls Russia. He isn't exactly your friendly next door neighbor.

We (and "we" here refers mainly to extreme Christians, rightwing trolls and apparently Hollywood actors) also need to come to grips with the fact that Putin is not "very cool." Russians, obviously, can go buy whatever T-shirts they want. But Americans don't need to be idolizing a militaristic, anti-gay, dolphin-stealing world leader.

And if those Putin T-shirts end up in the Williamsburg Urban Outfitters? Maybe the standards for exile can be lowered a bit. You know, ironically.