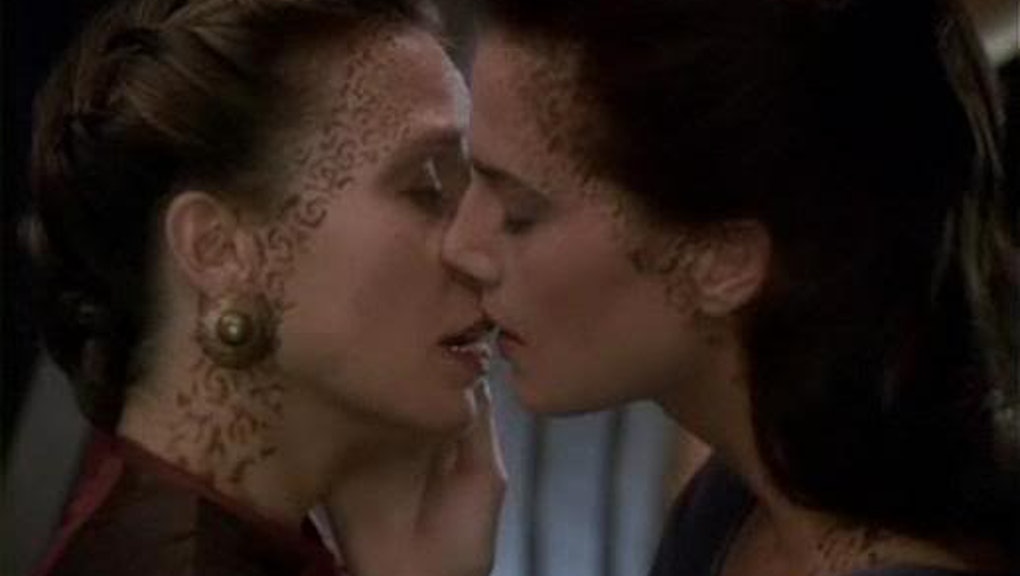 Mack made his commitment to tolerance across the universe very clear this week following what just might be the best response to a "fan" criticizing diversity in science fiction.

It all started when a homophobic reader emailed  Mack, co-author of two Star Trek: Deep Space Nine episodes, as well as several Star Trek books including Star Trek: Vanguard: Harbinger, expressing disgust with a same-sex relationship between a Vulcan and a Klingon spy, both women, in Mack's story.

"I deleted the book from my e-reader and will never purchase another volume authored by David Mack," the reader wrote, according to Mack's blog.

The truth is homosexually is not universally accepted and I get to decided what I read and I choose not to read any more of your work. And on top of that no Vulcan would consider the situation 'logical.' You can’t just remold the Vulcan persona to suit yourself.

Although the reader noted that he wasn't expecting a reply, Mack took the time to explain his position in a response that should be required reading for science fiction writers and fans alike.

"If he thinks the fear of alienating a few closed-minded readers is going to stop me from writing stories that feature and promote characters of diverse backgrounds — including LGBTQ characters, persons of color, and people who belong to ideological or philosophical minorities — he must be out of his mind," Mack noted.

"Although the various television series could have done more in their respective times to portray ethnic and gender diversity, those of us who write the licensed Trek fiction continue to do our best to depict a more progressive, enlightened, open, and harmonious future, not just for humanity but for all sentient beings. One in which love, equality, and compassion are the touchstones of civilized society."

Mack further noted that this particular story arc was one of the best he's ever written for the series: "I will never be made to feel shame for doing this," he noted. "I am proud that we've been able to do this. I know we've still got more work to do, and we can do better at integrating more diverse viewpoints and characters into the ever-expanding universe of Star Trek."

And as for that whole illogical Vulcan thing?

"I would rebut that Spock himself told Valeris in Star Trek VI: The Undiscovered Country, 'Logic is the beginning of wisdom, not the end,'" Mack wrote. "What Spock had learned that the author of this morning's e-mail apparently has not is that there are many ingredients to wisdom — including, but not limited to, compassion and empathy."

Hard to argue with that.

In recognizing that a lot more ground still needs to be covered, Mack also highlighted an important issue about the lack of diversity in everything from comic books to superhero movies and science fiction. The age-old Archie Comics introduced has worked hard to include more diversity and indeed introduced its first major gay character just this year, Marvel and DC have made viewers wonder forever whether Wonder Woman or Black Widow will be the first female superhero movie and Black Panther never got its own movie either.

And when children's books publisher Lee & Low Books looked at the top 100 grossing sci-fi and fantasy movies in the United States, only 14 movies featured female protagonists and eight had protagonists of color (Will Smith played six of them) and there were no LGBT protagonists.

Trekkies, meanwhile, have been begging for an openly gay character for years. But the iconic franchise is no stranger to same-sex attraction, even such plot lines have rarely been overtly expressed. Such implied attraction has led to a booming fan fiction universe explicating a romantic relationship between Captain Kirk and Spock. Indeed, fans have for years obsessed over the relationship between the characters.

Still, Mack's words should resonate not just with this one reader but for anyone who thinks lack of diversity in Hollywood is not an issue of concern.

"Whenever someone asks, Why do we need to keep talking about embracing diversity in stories, and seeking out diversity in the authors and creators and portrayers of speculative fiction? I will say it's because too many authors and artists and filmmakers still get letters like this one," Mack concluded.

"We need to work toward a better future in which no one would even *think* of writing an e-mail like this."