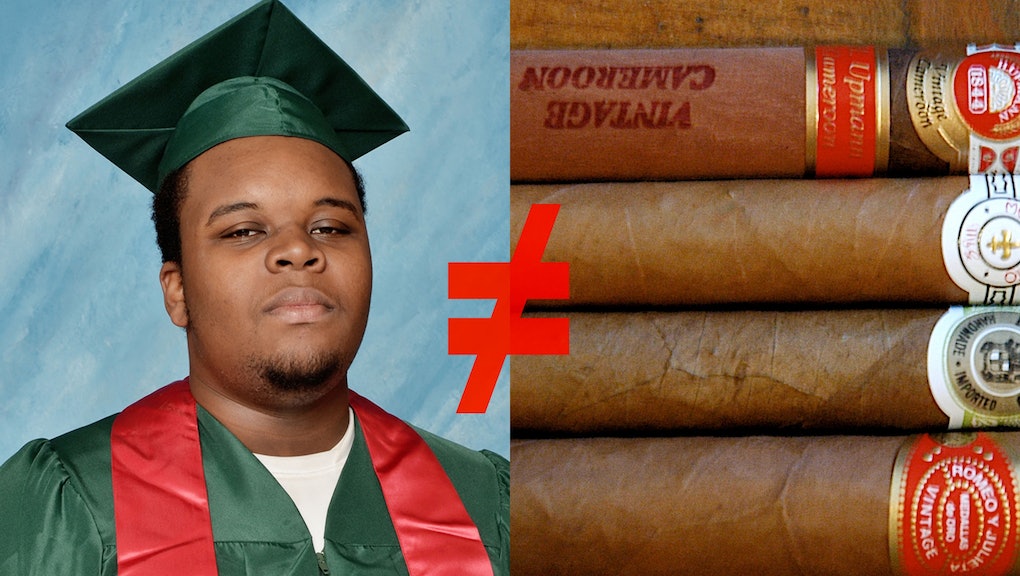 7 Things Worth More Than a Black Person's Life in America

We’re constantly being asked to qualify black life in America. So when Ferguson Police Chief Thomas Jackson identified Darren Wilson as the officer who killed 18-year-old Michael Brown during a press conference on Friday, the logic he employed to justify Wilson's actions was all too familiar.

"At 11:51, there was a 9-1-1 call from a convenience store nearby. At 11:52 dispatch gave a description of the robbery suspect over the radio ... further description of the suspect was given over the radio, which describe the suspect walking towards QuickTrip. The office [involved in the shooting] left a sick call. At 12:01 p.m., our officer encountered Michael Brown on Canfield Drive. At 12:04, a second officer arrived on the scene immediately following the shooting."

In not too subtle a move, Jackson accompanied his announcement with video of Brown allegedly shoplifting a box of cigars from a convenience store the day of his murder. The implication was clear: Brown was a criminal, hence a violent encounter with police was inevitable and most likely warranted.

It didn’t matter that Officer Wilson had no knowledge of the theft before shooting Brown. Nor that Jackson likely aired the tape unprompted, despite his claims to the contrary.

What mattered was this: When a black person is killed under dubious circumstances, the conversation inevitably turns to what the victim did to precipitate – if not outright deserve – such an abrupt and violent demise.

This is not a new phenomenon, of course. Into the mid-20th century, even the most casual display of disrespect towards a white person, real or imagined, was enough to justify a gruesome death. But in recent years, the tone has shifted: It’s more common to justify black death relative to specific items, e.g. what the victim had allegedly stolen, possessed or wanted at the time of his or her murder.

Disputes over material goods have prompted a disturbing frequency in black people being killed by police and regular citizens alike in recent years. And in each of these actions lies an implicit value judgment: The black victims lives' are worth no more to their murderers than the items for which they were killed.

This is the America we live in today. Here are seven troubling examples from the past 22 years:

Brown, unarmed, allegedly stole a box of cigars from a convenience store shortly before Officer Darren Wilson shot him to death in Ferguson, Mo., on August 9.

Garner, 43 and unarmed, was allegedly selling untaxed cigarettes when New York police officers choked him to death on Staten Island, NY, on July 17.

McBride, 19 and unarmed, was seeking help after a car accident when she knocked on Theodore Wafer's front door the night of Nov. 2, 2012. Wafer shot her to death on his front porch outside of Detroit, Mich.

McDade, 19 and unarmed, had allegedly stolen a laptop when police shot him to death in Pasadena, Calif., on March 24, 2012.

Martin, 17 and unarmed, was wearing a black hooded sweatshirt when George Zimmerman chose to follow him and instigate the fight that led to his murder. FOX News host Geraldo Rivera famously blamed Martin's attire for his death, claiming the sweatshirt was "as much responsible ... as George Zimmerman."

Kyser, 35, homeless and unarmed, had allegedly stolen a tube of toothpaste from a Chicago, Ill., CVS when the store's manager, Pedro Villanova, followed him outside into an alley and choked him to death on May 8, 2010.

On March 16, 1991 in Los Angeles, Calif., Harlins, 15 and unarmed, was accosted by convenience store owner Soon Da Ju, who claimed she was stealing a bottle of orange juice. A scuffle ensued, after which Harlins walked away. Ju pulled out a gun and shot Harlins to death.