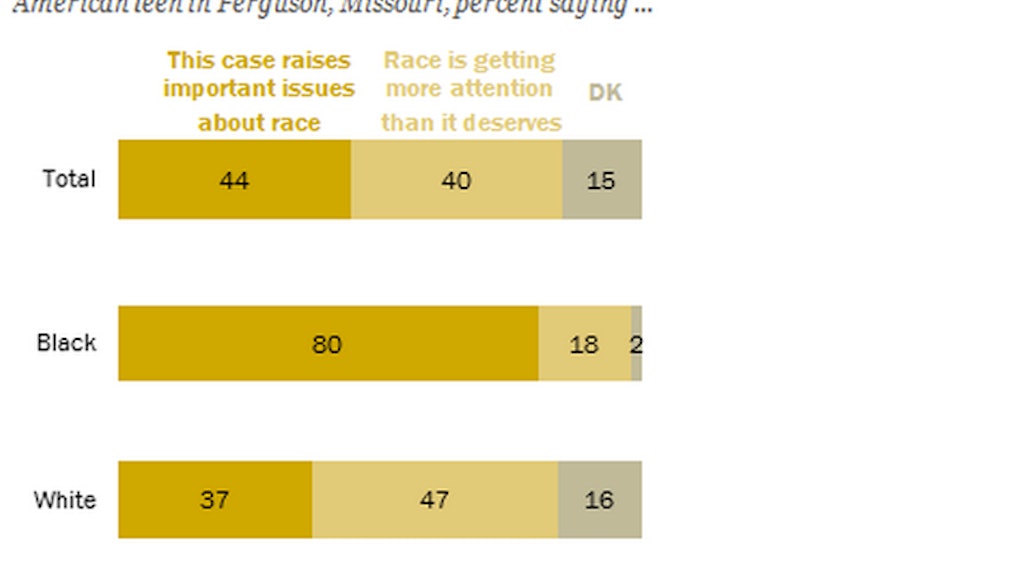 Why White People Don't Seem to Understand Ferguson, in One Chart

The news: In some very discouraging news, almost half of white Americans have put on their color blinders regarding Ferguson, Mo., and the fatal police shooting of Mike Brown. A recent Pew poll of 1,000 adults has discovered that an astonishing 47% of white Americans think that "race is getting more attention than it deserves" on the circumstances of his death, compared to just 18% of black people.

Just 37% of whites said that they thought the "case raises important issues about race," while an overwhelming 80% of black people said they thought the focus on Brown's ethnicity was warranted.

It's one thing to disagree about the circumstances of the shooting death of Mike Brown, but it's another entirely to pretend that the case truly lacks racial implications . Despite sustained protests and arrest statistics that prove Ferguson's police department disproportionately targeted the town's black community, four out of 10 whites don't think that the resulting conversation about race and policing deserves as much attention as it's gotten.

It gets worse: Pew found whites were also much less likely to think the police response to Brown's death — which has involved crackdowns on protesters, arresting and harassment of reporters and a calculated attempt to smear Brown by releasing CCTV footage of his involvement in a shoplifting incident — "has gone too far." Sixty-five percent of black people were critical of the authorities' response, while as many whites thought it has "been about right" or excessive. The largest group of white respondents, 35%, didn't know — either because they haven't been paying attention or haven't given it much thought thereafter.

Whites are also far more confident than black people in the authorities' ability to reach a fair conclusion from their investigation:

In practice, these differing racial perspectives play out in real ways like news coverage. As Mediaite's Andrew Kirell notes, FOX News' conservative coverage has been much less focused on the events in Ferguson than its competitors — probably partially because it caters to an older, whiter audience than them.

Why the sharp divide? It's easy to attribute the difference to outright racism and to be clear, that plays a definite role. But mostly, it's likely because black Americans are more sharply aware of racial discrimination in policing because it disproportionately happens to them. The ACLU reports that SWAT teams are more likely to be used on minority suspects than white ones, while multiple studies have confirmed that racial profiling is rampant across American police departments.

Whites would do well to listen to black people as they continue to speak out in Ferguson because it's clear that many of them don't realize the struggles of being black in America. And the ones that do and don't care are a big part of the problem.