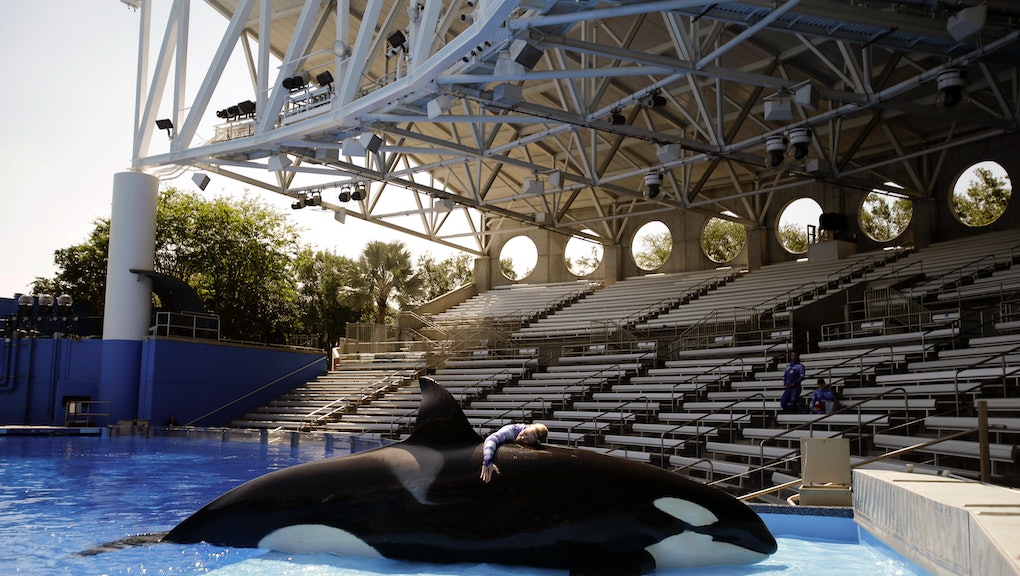 SeaWorld may have just given animal rights activists a new playbook.

After months of vigorously fighting the allegations of abuse and neglect made in the 2013 documentary Blackfish, the theme park has recently taken steps towards acknowledging and rectifying their past mistakes. All it took was a 30% drop in their stock price.

Just days after news broke of their pitiful quarterly report, executives at SeaWorld went into damage control mode and announced they would be upgrading the enclosures in which their orcas spend the vast majority of their shortened lives. The new tanks, currently being built, will be 50 feet deep and have a surface area of 1.5 acres, giving their captive orcas more room to swim and, theoretically, reducing the psychological damage caused by their confinement.

While SeaWorld execs claim that the tanks have been in development for some time, it is easy to connect the dots between the success of Blackfish to SeaWorld's reduced business and finally to this last-ditch attempt to lure back their customers. It remains to be seen if the public will be swayed, or if they would rather see SeaWorld simply go out of business. Either way, it is a landmark moment for animal rights activists, who have protested the use of animals in entertainment, including theme parks like SeaWorld, for years, as well as a teachable moment for filmmakers who wish to effect change.

Blackfish is not the first example of a documentary leading to tangible real-life reform. In 2004, McDonald's took the "Supersize" option off their menus a mere six weeks after the release of Morgan Spurlock's Super Size Me. The fast-food behemoth has subsequently made other health-conscious moves, like posting nutritional information for its whole menu and including healthier snacks, such as sliced apples, in its Happy Meals. Errol Morris' 1988 documentary The Thin Blue Line reexamined the case of Randall Adams, who had been convicted of murdering a police officer. Exposing an astounding case of police corruption, Morris proved that Adams had been framed, and he was ultimately exonerated.

Recently, issue-based documentaries have aimed at larger, systemic reforms, and the results are still unknown. Gasland raised awareness about the impact of natural gas extraction, known as "fracking," on the health of rural communities. The battle over fracking is currently playing out in states such as New York and Pennsylvania, and energy companies have spent a lot of time and energy trying to refute the claims made in the film. Likewise, films such as Inside Job, Inequality for All and Money for Nothing: Inside the Federal Reserve attempt to explain the failures of Wall Street to foresee and prevent the financial collapse of 2008, the ramifications of which remain hugely relevant today.

None of these films were box-office hits, including Blackfish (which made a scant $2 million in its theatrical release), but they have been viewed millions of times on streaming services, and their messages have become part of a broader national conversation. Positive buzz spread through social media, giving them a delayed but perhaps deeper and longer-lasting impact. That's the model Blackfish is following, and its subject matter, which already has such a fervent following, puts it in a position to have a ripple effect of positive change.

Perhaps more than with any other issue, documentary filmmaking can be a huge asset in the animal rights movement. Filmed footage of animal abuse has the uncanny ability to turn animal lovers into animal advocates; it's for this very reason that corporate farms are trying to outlaw the practice of sending undercover investigators into factory farms. A documentary like Blackfish that blends raw footage, expert analysis and a strong argument becomes even more effective.

The Blackfish model of storytelling could be applied to other issues surrounding animal use for and in entertainment. For example, circuses: Activists have protested the cruel training methods used for the elephants, lions and other circus animals for years, and a documentary involving undercover footage of those practices could have the same impact on Ringling Brothers and Barnum & Bailey that Blackfish had on SeaWorld. Likewise, the use of animals in film and television is ripe for exploration right now, especially with the current controversy over the effectiveness of the American Humane Association and its "no animals were harmed" disclaimer.

For now, we should appreciate Blackfish and the lessons it provides. The interplay between media and advocacy is changing so rapidly, it is always useful to have a success story to imitate. Blackfish may be the first world-changing documentary about animal abuse, but it likely won't be the last.