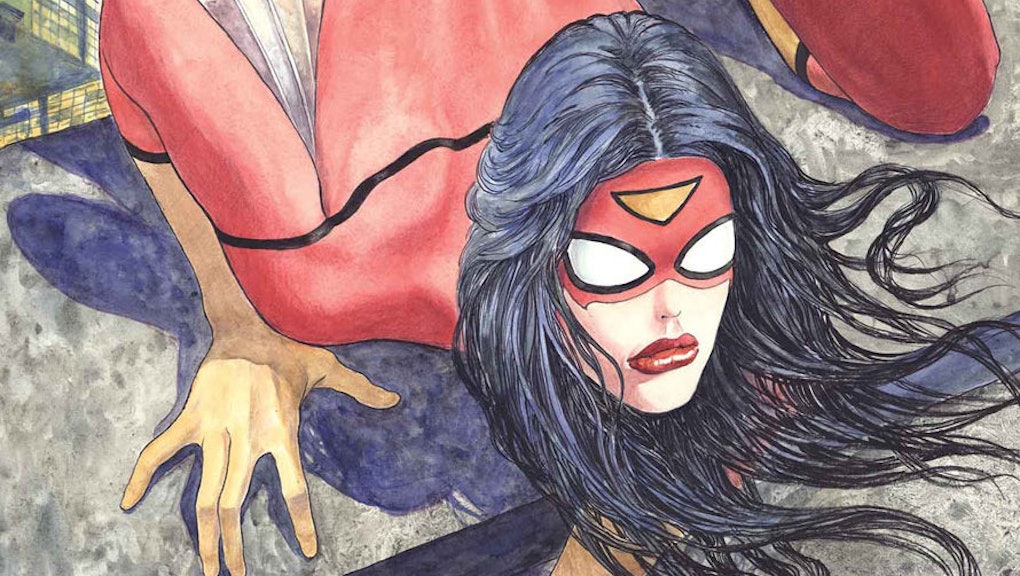 Even before it could stem the flood of criticism about excluding Gamora from its Guardians of the Galaxy merchandise, Marvel Comics is in the midst of another controversy about its portrayal of female superheroes. With a nearly naked body and prominent, heart-shaped butt, Marvel's latest depiction of Spider-Woman is a blatant sexualization of a female superhero some hoped would bring a dose of female strength to a male-dominates genre.

On Monday, Marvel released Milo Manara's variant cover for Spider-Woman #1, slated to debut in November Industry sites like Comic Book Resources were quick to point out that the artwork — and one drawing in particular — was yet another disappointing example of a male artist imposing unrealistic ideas of female body and female sexuality onto a supposedly empowered female comic book character.

There's pretty much no chance that this pose — butt raised high and face almost touching the ground — would be used to depict a male superhero. For one thing, it looks intensely uncomfortable. And how is her suit stretched that tight?

It's certainly true that the superhero genre focuses on exaggerated sexuality — men, too, are beefed up unrealistically — but we still need to see more diversity in body depictions and poses. There's a big difference between athletic and absurd.

Unfortunately, hypersexualized poses and unrealistic body images have become the signature go-to response every time a female superhero is featured. It's not enough that women in comics are shown as skinny-waisted and thin-armed with a mane of glossy hair that would make a Pantene model envious — they also often fight in nothing more than a glorified bras.

This over-the-top objectification of women in comics is hardly a new issue, of course. The cover of DC Comics' Teen Titans #1 had a horrible portrayal of Wonder Girl, with oversized breasts practically popping out of her dress. Meanwhile, Bruce Banner's Hulk is generally shown as a terrifying monster while Jennifer Walters' She-Hulk is sinewy, skinny and sexual.

Tom Brevoort, Marvel's senior vice president of publishing, commented fairly innocuously on the brouhaha via his Tumblr, writing that "People who are upset about that cover have a point, at least in how the image relates to them." Slightly more reassuring were the words of Dennis Hopeless, the writer for the new Spider-Woman series, who told fans on Twitter that any controversy over the cover would not be reflected in the content.

"I can promise you we have no intention of blatantly sexualizing any of the characters in our story," he said. "I don't have any input at all on covers. You have my word that our story treats Jess with the utmost respect."

That may be true, and there's no reason to doubt that Hopeless won't live up to his promise. But the depictions of Jessica Drew, She Hulk, Wonder Girl and many others prove that as far as artwork is concerned, the message hasn't sunk in yet.

"When artists place female characters in costumes like the one Wonder Girl is wearing, it makes them look less like heroes and more like dolls to be ogled at." Lauren Davis observed earlier this year.

"There may be a reason that Wonder Girl is on the team aside from her enormous breasts, but you have to get past that cover in order to read the story."