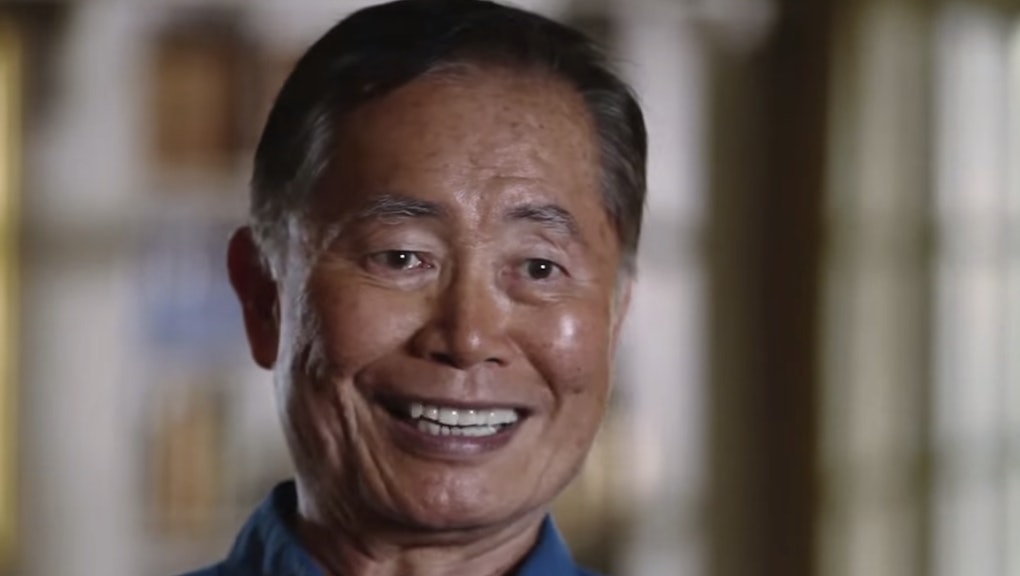 It has been, on the whole, an extraordinarily terrible summer for movies. The big blockbusters mostly stunk, the smart indie films largely evaporated in the heat and save for Boyhood and a lot of Chris Pratt hanging with a raccoon and his talking tree, we're left with little to remember.

That is, until this weekend, when Love Is Strange and To Be Takei hit the box office simultaneously.

Both movies premiered at this year's Sundance Film Festival, where they were met with critical acclaim and plenty of press notice. Their twin scheduling eight months later is most definitely a coincidence, but when two films about older gay couples hit theaters at the same time, it marks an important milestone in Hollywood history, both because mainstream distributors have been so reticent to distribute films like these prior and because the industry rarely misses an opportunity to celebrate itself for incremental progress. The strange quietude that marks these releases is worthy of note, as is the quietude of these films more generally.

The couple lose their apartment after George loses his job, and the two are forced to live apart and struggle at keeping their connection as financial troubles mount. Soon the movie becomes more about the tragedy of aging than the characters' sexuality. Their alienation stems not from their marriage, but the little use or regard that society seems to have for anyone not able-bodied enough to be fully exploited in the workplace.

"George and Ben are an older gay couple, friends to some and relatives to others, and Sachs and [cowriter Mauricio] Zacharias make sure that we see every aspect of their lives in its complexity and wholeness," James Rocchi writes for Indiewire, beautifully encapsulating the protagonists' utility. It's a story of a relationship, and one that just so happens to be between two men.

To Be Takei tracks the reemergence of actor George Takei, who came out in 2005, married his husband Brad Altman in 2008 and became a passionate voice for both LGBT rights and witty Facebook memes. It's an inspiring behind-the-scenes look at how Takei, who was closeted for the first 62 years of his life and felt forced to bring women to parties in Hollywood, finally got the courage to speak out. But even more so, the film is a sweet window into the very simple domestic life of a couple deeply in love.

As Brad Takei (he changed his name a few years after they wed) told me in an interview, they agreed to be filmed for three years in the hopes that "the movie showed we're just like everyone else, just the same gender, and maybe fair-minded people will think twice about wanting to discriminate against the LGBT community."

It's that spirit that actually makes the lack of recognition for this milestone weekend somewhat heartening. Here we have two movies about two couples living normal lives (aside from, well, being in Star Trek, of course). There is little fanfare, and they're not being used as educational tools. They're just slice of life. Films like Milk were crucial to educate Americans about the bloody struggle for LGBT rights; six years later, movies like Love Is Strange and To Be Takei illustrate the next step: normalcy after acceptance.

Aside from that, these are actually two of the best films debuting this weekend. Elsewhere at the box office, we have the grossly retrograde Sin City sequel, a listless YA adaptation in If I Stay and the cliche-ridden, Friday Night Lights-on-holy water football flick When the Game Stands Tall. Not every theater will get Love Is Strange and To Be Takei (which is also available on VOD) right away, but strong attendance will send a message. A milestone moment only matters if it sets a pattern.