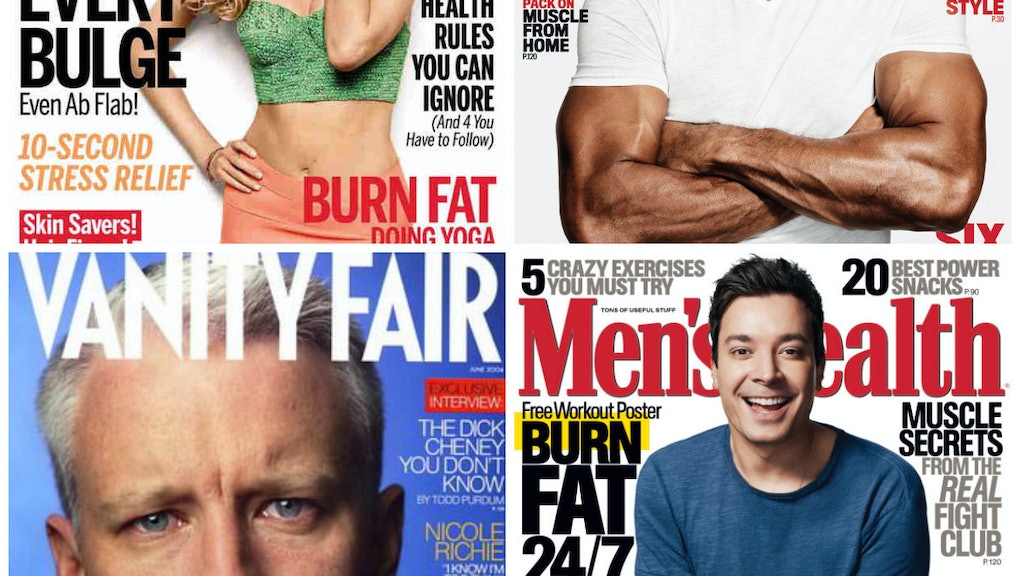 FOX sportscaster and Dancing With the Stars host Erin Andrews is an acclaimed reporter and engaging TV personality. But earlier this week, Andrews caused a stir when she appeared on the cover of Health magazine. The 36-year-old broadcaster bared her toned torso in a stylish cropped top and spoke about her workout routine, a common practice for celebrities and media figures.

As Andrews revealed during a sit down with HuffPost Live on Tuesday, she received backlash from those who thought the cover looked unprofessional — despite the fact that many of her male colleagues have posed for similar photos and public occasions. In fact, Andrews pointed out, the guys care about their own looks just as much as she does.

Strahan has even worked out shirtless on his show, and it's no strange occurrence to see him and other male media personalities on the cover of health and beauty magazines:

"It's funny when you post that and people are like, 'Well, that's hard-hitting journalism,'" Andrews said on HuffPost Live. "Uh, my mentor and a guy I look up to in the industry, Michael Strahan, he was on the cover of a men's health magazine, Men's Fitness."

It's an unusual flip on the typical double standard we see in media: Women being held to a higher physical standard than men and judged by their looks, whereas men's bodies and clothes get to be taken out of the equation.

This time, in a reversal, Andrews is being hit with a different, just as damaging, double standard: Being told she shouldn't care about how she looks, because that care could compromise her image. But as she told HuffPost Live, "[On] the Fox NFL pregame show, [the male broadcasters] are dressed to the nines. Their stylists, who I'm very good friends with, dress them very well, and no one says anything about that."

"That kind of stuff used to upset me, and I think I used to hold back. Now I embrace it. It's awesome. The boys are doing it, why can't I do it?" she added. "What's wrong with showing that you're a woman who takes care of her body and works out and likes to dress up and wear lip gloss? And hey, she can hang with the boys."

Considering that she scored one of the biggest football stories of the year, it doesn't look like Andrews' lip gloss is interfering with her job too much.