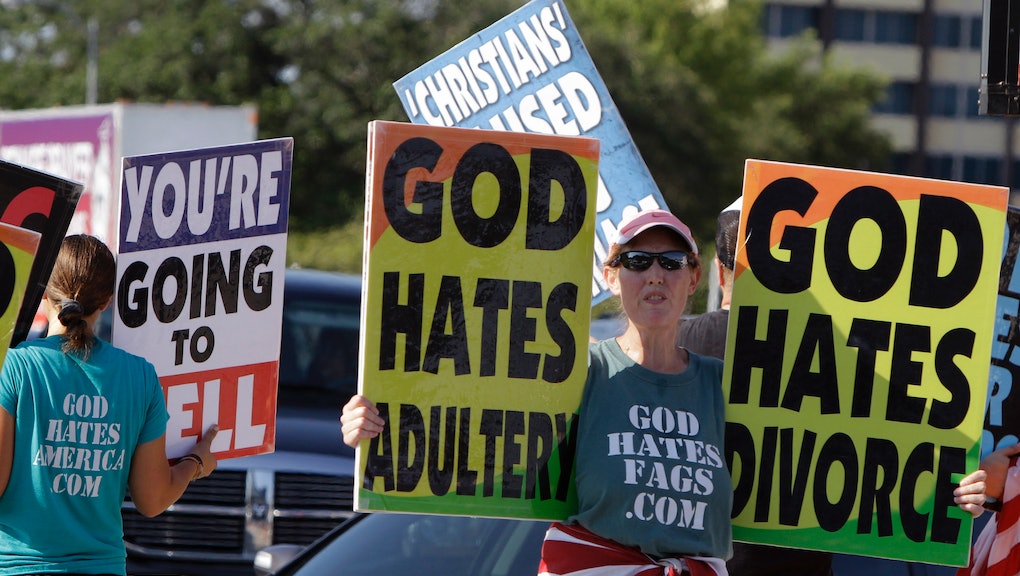 According to the Advocate, the much reviled hate group has accepted Australian TV host Adam Hills' offer to fly them first-class to Iraq to protest the Islamic State. If they go, they'll enter one of the more hostile environments — particularly for Christians — in the world today.

Which is ironic, because they've spent the past 23 years making everywhere they go the most hostile environment for everyone else.

The group has gained notoriety in recent years for staging remarkably cruel protests at high-profile events and funerals, waving signs that read "God Hates Fags" and blaming every tragedy they encounter on America's perceived endorsement of "sinful" (read: LGBTQ) lifestyles.

When Adam Hills learned of this, he was not amused.

In what was likely meant as a throwaway joke, he suggested on his show, The Last Leg, that if WBC members were so bent on preserving the so-called Christian way of life they should take their rallies to Iraq, where IS members have claimed responsibility for "exiling thousands of Iraqi Christians" and others, and "killing those who fail to leave," according to the Advocate.

The perception, presumably, was that WBC members would last no more than a minute on the ground. Imagine Hills' incredulity when they accepted his offer.

A concrete plan has yet to materialize: But needless to say, this high-profile pissing contest belies some very real dangers, from recent escalations of IS violence to the dogged fanaticism of this Southern Poverty Law Center-classified hate organization. Not to mention that WBC members would almost certainly be killed the second they touched down in IS territory.

In the end, it seems unlikely Westboro will follow through, but only time will tell. Meanwhile, you can catch them picketing Mike Brown's funeral in Ferguson, Mo., on Monday — a death they blame, of course, on openly gay St. Louis Rams draftee Michael Sam.