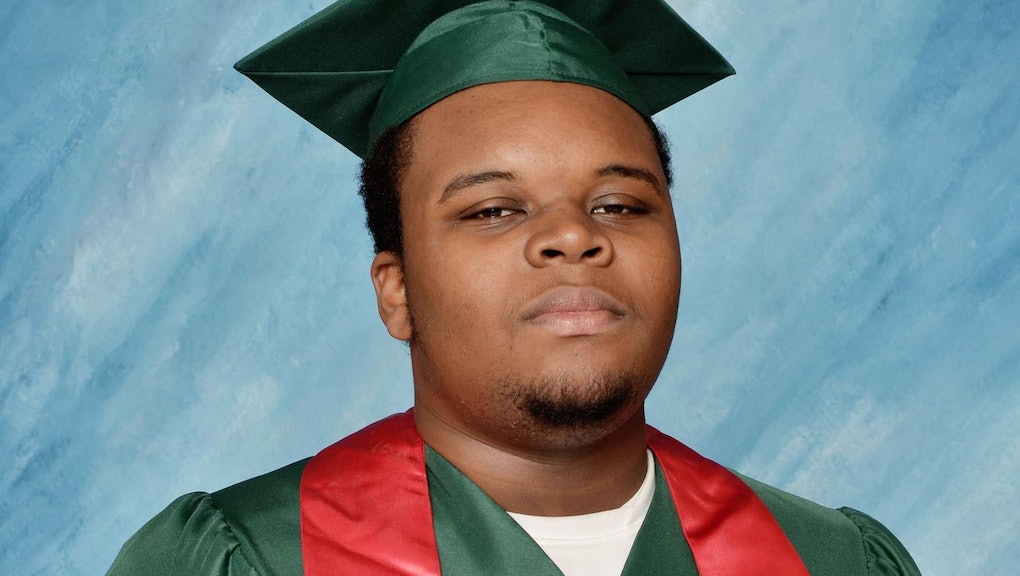 Michael Brown, 18, due to be buried on Monday, was no angel, with public records and interviews with friends and family revealing both problems and promise in his young life. Shortly before his encounter with Officer Wilson, the police say he was caught on a security camera stealing a box of cigars, pushing the clerk of a convenience store into a display case. He lived in a community that had rough patches, and he dabbled in drugs and alcohol. He had taken to rapping in recent months, producing lyrics that were by turns contemplative and vulgar. He got into at least one scuffle with a neighbor.

There's so, so much wrong in this passage. When the news of the unarmed 18-year-old's death went nationwide, many young black men around the the country used the hashtag #IfTheyGunnedMeDown to highlight a disturbing trend in how the media portrays black men:

"The media tends to pick the most incriminating or easily misinterpreted victim photos possible when portraying murdered black boys and men," wrote Mic's Zak Cheney-Rice at the time. "We saw it with Trayvon Martin. We see it again with Mike Brown."

“I understand the concerns, and I get it,” Mr. Eligon said. He agreed that “no angel” was not a good choice of words and explained that they were meant to play off the opening anecdote of the article in which Mr. Brown saw an angelic vision. That anecdote “is about as positive as you can get,” Mr. Eligon said, and noted that a better way to segue into the rest of the article might have been to use a phrase like “wasn’t perfect.”  “Hindsight is 20/20. I wish I would have changed that,” he said.In general, he said, the profile was a “full, mostly positive picture” of the young man.Ms. Mitchell told me that “the story basically says he’s human.”

But in the Times' case, the Awl's Matt Buchanan notes that the paper has twin profiles of both Brown and his shooter, Ferguson Police Officer Darren Wilson, right next to each other on the homepage, offering a glaring "study of contrasts."

Hell, contrast Brown's profile with this 2013 Rolling Stone profile of Dzhokhar Tsarnaev, one of the two Boston Marathon bombers. Tsarnaev, in the third paragraph of the piece, is given the same excuse applied to white perpetrators of far more dangerous crimes than Brown ever committed: He was "a good kid" whose descent into violence "surprised everybody."

People in Cambridge thought of 19-year-old Dzhokhar Tsarnaev – "Jahar" to his friends – as a beautiful, tousle-haired boy with a gentle demeanor, soulful brown eyes and the kind of shy, laid-back manner that "made him that dude you could always just vibe with," one friend says. He had been a captain of the Cambridge Rindge and Latin wrestling team for two years and a promising student. He was also "just a normal American kid," as his friends described him, who liked soccer, hip-hop, girls; obsessed over The Walking Dead and Game of Thrones; and smoked a copious amount of weed.

And there's one more example: me.

But sadly, being "good" wasn't actually good enough for Brown. For many black youth in America today, being good isn't enough: You have to be better than good.