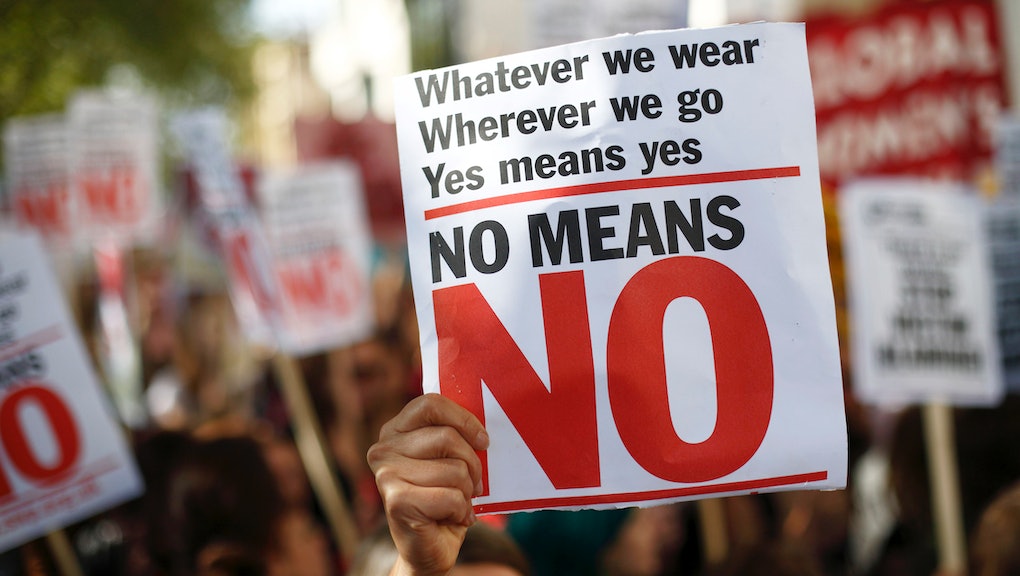 Here's some fantastic news for your Friday: On Thursday, the California Senate unanimously approved a new bill that defines sexual consent as a firm "yes" rather than a lack of "no."

This is a big win for anti-rape activists, many of whom have been touting the necessity of an "affirmative consent" standard for years. California Gov. Jerry Brown (D) has the next month to sign the bill into law. If he does, schools across the state would be required to define consent before engaging in sexual activity as an "affirmative, conscious, and voluntary agreement" or risk losing state financial aid funding.

The bill comes at a time when dozens of schools across the country remain under investigation for allegedly mishandling sexual assault claims, so let's just take a moment to celebrate this small, but important, victory. This is progress.

According to the New York Times, "Advocates for victims of sexual assault supported the change as one that will provide consistency across campuses and challenge the notion that victims must have resisted assault in order to have valid complaints."

The bill isn't without detractors. Nevertheless, frequent concerns that such an enthusiastic standard is "excessive" or will turn all sexual encounters into awkward Q&A sessions (a fear immortalized by an infamous Saturday Night Live skit called "Is It Date Rape?" that depicted the issue as a game show) are misguided. Ridicule of the affirmative consent standard often misunderstands its actual intentions, importance and efficacy.

For one thing, the bill does not require verbal consent. Affirmative consent really just means ensuring that both parties are mutually into whatever sexy times are going down, which, when you think about it, should be the bare minimum when it comes to sexual activity.

Many schools also already have such a standard in place. And, as ThinkProgress' Tara Culp-Ressler points out, "The National Center For Higher Education Risk Management, which advises higher education institutions about how to craft effective sexual assault policies, has been recommending this type of consent standard for more than a decade."

Writer Jaclyn Friedman illustrated the importance of affirmative consent through a great analogy in a 2010 blog post, in which she argues, "Consent isn't a question. It's a state." She continues, "If, instead of lovers, the two of you were synchronized swimmers, consent would be the water. It's not enough to jump in, get wet and climb out — if you want to swim, you have to be in the water continually. And if you want to have sex, you have to be continually in a state of enthusiastic consent with your partner."