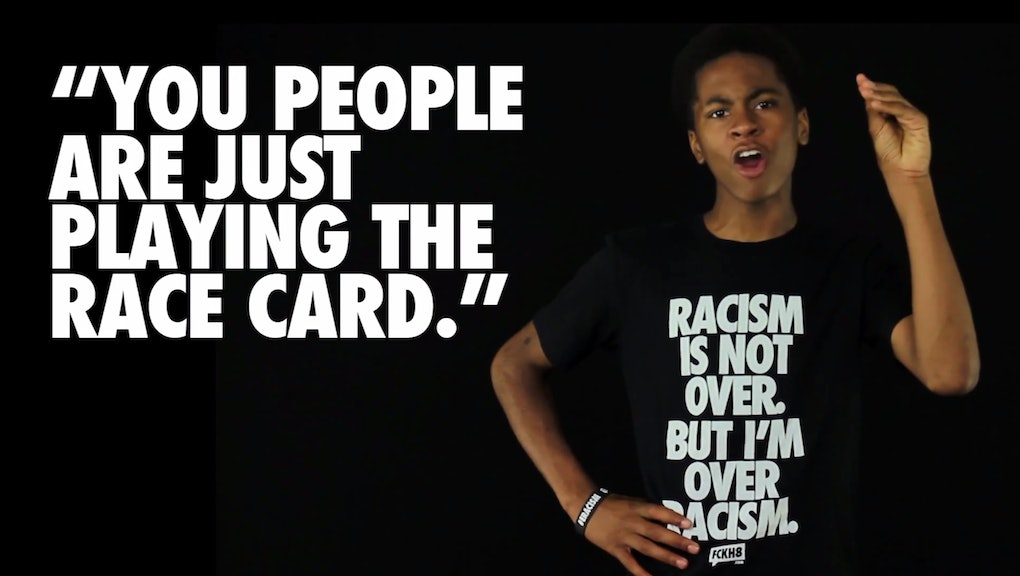 Sometimes it takes the voices of children to speak truth to power, especially when it comes to the evils of racism.

Without question, the widespread police brutality and abuse, both in Ferguson, Mo., and around the country, has elevated the consciousness of young people across America. But many others still are laboring on the illusion that we are living in a post-racial nation following the election of President Barack Obama.

Leave it to six young kids — all of whom hail from the place where 18-year-old Michael Brown was shot and killed in August — to send the perfect wake up call. In a new video produced by the advocacy T-shirt company FCKH8, black youth from Ferguson have a message that they want every white person to hear: Racism is not over, but I'm over racism.

"Just because Beyoncé is on your playlist and you voted for Obama, doesn't mean our generation has seen the end of racist drama," they note. "Racism is not one of those things that goes away if you pretend it doesn't exist ... like Crocs or Justin Bieber."

What makes this video refreshing is its bold blend of sarcasm and mythbusting, which employs humor to share important facts about the many subtle and overt ways that racism continues to plague society. In the process, they take on some of the more clueless things white people say about racism — commentary often tinged with guilt, tears and denial of white privilege — and challenge it with their own experiences of being young black people in America.

"Sometimes white people are like, 'But is racism still a thing?' ... 'All this focus on race makes me uncomfortable.'" one of the video's young stars says. "Uncomfortable? Try being black!"

The youth take on a variety of political and cultural issues. They even challenge the growing popularity of stop-and-frisk policies in major urban areas such as Chicago and New York City. Backing up their outrage, the video cites research that shows whites are frisked during 8% of stops, while blacks and Latinos are frisked 85% of the time. The alarmingly disproportionate rate of police harassment against minorities hasn't stopped many white people and others like Don Lemon from rationalizing the policy as being a mere "sacrifice" for public safety.

Police harassment, race-based employment discrimination, racial profiling and the school-to-prison pipeline are just a few of the many things most white people never have to think about because the system's been constructed in their favor since the very beginning — and that's something these young people want everyone to understand.

Even though FCKH8 has seen its share of controversy — critics claim the company railroads social justice causes with racially problematic and exploitative messaging to sell merchandise — its latest offering featuring the voices of kids from Ferguson couldn't come at a better time. The Justice Department has opened a full investigation into the conduct of Ferguson's police force and many others — especially Brown's parents — look forward to getting some answers.

As more and more unarmed black youth are beaten, and even killed, at the hands of police officers, parents across the country are being forced to have otherwise unthinkable conversations with their children about the lasting legacy of racism in the United States. It's not just a matter of history anymore, it's about survival and educating the next generation so that what's happened in Ferguson never happens in the years to come.

Until then, Americans old and young will continue asking the important question most adults still don't have a clear answer for: Why haven't we gotten over racism yet?