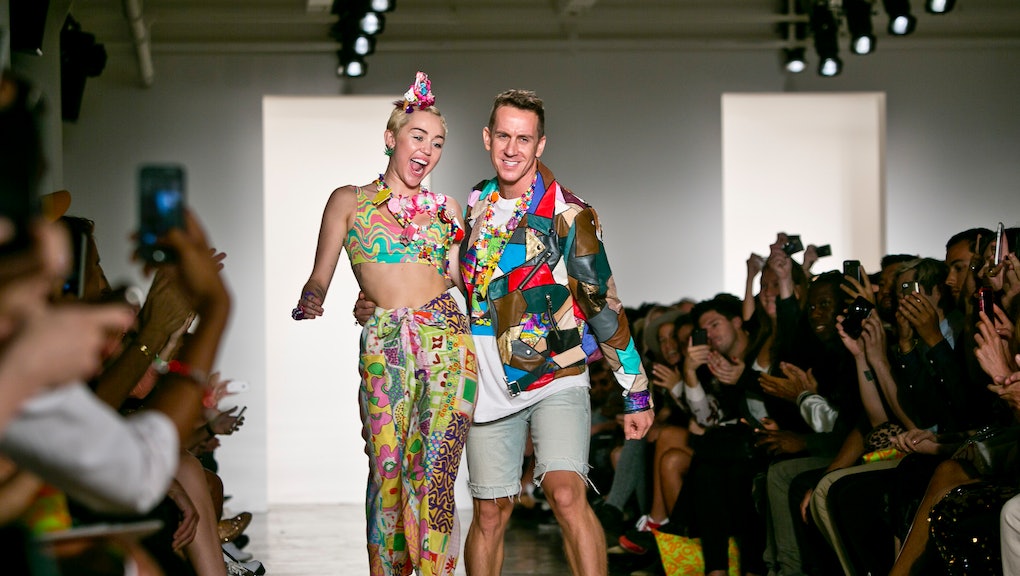 On Wednesday night, the masses were clambering to get into the Jeremy Scott show at New York Fashion Week. Crowds jostled, necks craned, but it was only partially about the collection. A great deal of the excitement surrounded Miley Cyrus' addition to the show: pieces from her art collection "Dirty Hippie."

Half art collection, half jewelry line, Cyrus' next move to prove her edginess involves exhibiting her tricked-out bongs and necklaces, created out of selfie-loaded USB sticks and fan gifts. And to be honest, it's not all that bad. And if it gets people going to a downtown New York gallery at the V Magazine offices (where the collection is now being displayed) for an afternoon, all the better for it.

Before we get into the nitty gritty of Cyrus' art, it's worth considering for a minute why what she's doing is a great thing. It might not be as overtly good as raising awareness for homeless youth, but by virtue of her presence, Cyrus is raising awareness and making accessible the often obtuse, distant world of art galleries. The small galleries of any city, especially downtown New York, can feel like clean white boxes with stern monochrome stewards, opaque and uneasy. By taking her explosive fashion week-marinated artwork, partially built out of the gifts she's received from fans, there is a real chance that a different audience will come in and bring their own insight to exhibitions.

As for the actual works themselves, Cyrus does a pretty good job of creating exciting, if light, objects. There's the gaudiness of Takashi Murakami's superflat color explosions and a fantastically weird combination of effigies and images: anthropomorphic donuts and teddy bears sit alongside lollipops, friendship bracelets and even one of the mascots of British tea brand Tetleys.

There is something easy-going and eclectic about the selections she makes, but there's something confusing as well. For a woman who has worked as hard as she possibly can to separate herself from her childhood image, this exhibit embraces childishness with neon colors, chipper attitudes and ludicrous combinations of symbols. As fun as it is to look at, it seems odd for the woman separating herself from her adolescent image to create objects that are so infantile — though what could be initially perceived as infantile could maybe more honestly be described as an acid trip.

While many will be annoyed that Cyrus has received an art show that comes from such a breezy, bubbly place ("It's so stupid" she quips in an interview with V Magazine) and others could say it's a plow for press for V Magazine, it is important to remember that a stunt show like this is meant to draw crowds and get them interested in the gallery as much as the specific show.

Having Cyrus offer up fun, bright pieces that invite personal exploration over political allegory might not be a sustainable model for art, but it is nice to have her fighting in our corner.

The collection is currently on display at 11 Mercer St. in New York.