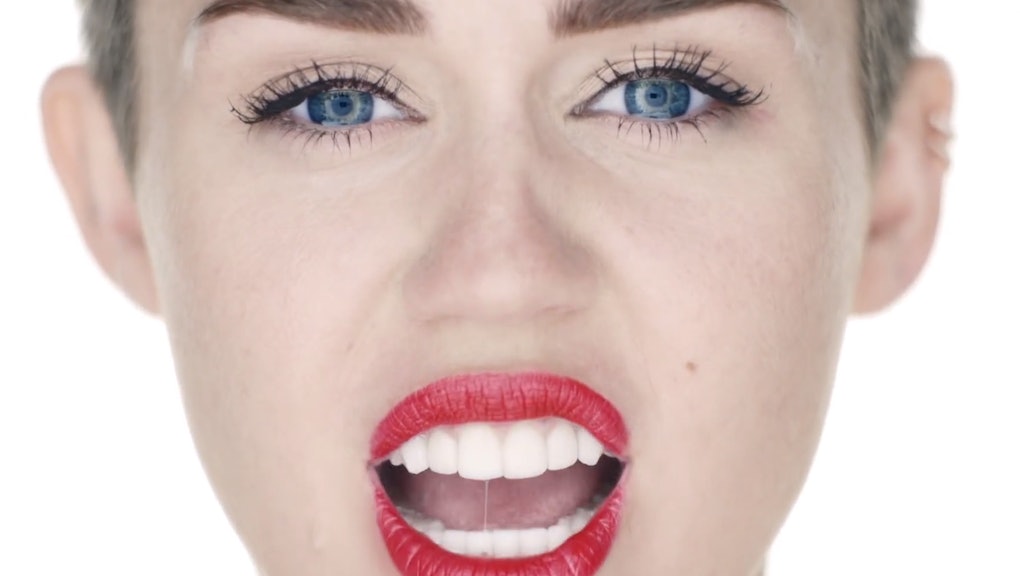 Pot, hot dogs and way too many crop tops — that's what comes to mind when you imagine Miley Cyrus in a post-VMA world.

But for someone so desperately rebranding herself as an in-your-face sex icon, Cyrus possesses a surprising depth of character. Every so often, she says something so smart that we forget all about the other ways she likes to use her tongue.

Here are some wise words that you wouldn't think came from Miley Cyrus.

In a New York Times interview, Cyrus explained that her radical rebranding was actually just her decision to be honest with the public. This pop star's transformation may have been eyebrow-raising at minimum, but given her history of being silenced by Disney, it's striking that we're more offended by Miley with the muzzle off.

2. On sexism in the media

The double standard for female behavior both in the media and in the world is beyond doubt. When Cyrus points out the media's utter lack of attention paid to her male partner in crime at the 2013 Video Music Awards, she's only commenting on one symptom of an issue that plagues us across the globe.

"They say money can't buy happiness, and it's totally true. Money can buy you a bunch of shit to glue to a bunch of other shit that will make you happy, but besides that, there's no more happiness. There's no point in me focusing on getting any fucking richer. Obviously the shit you buy doesn't make you happier because I'm sitting here gluing a bunch of junk to stuff."

Cyrus explained her thoughts on materialism to V Magazine at the closing of her recent art project "Dirty Hippie," a series of sculptures displayed as part of designer Jeremy Scott's fashion show.

4. On mental health and marijuana

Though she is the queen of social media, Cyrus frequently claims that she doesn't Google herself, and used this Yahoo! interview to make a surprisingly strong argument about mental health. Reporter Chris Bath challenged her love of marijuana, asking, "Does it ever bother you that drugs could hurt your brain?" Cyrus appropriately redirects the question to the well-documented negative effects of constant social media use.

"Anyone that hates on you is always below you, because they're just jealous of what you have."

All right, this W Magazine quote could probably more accurately be summed up as "haters gonna hate." But that would probably be infringing on Taylor Swift.

"When I do things that would get someone old to shake their head, my fans go apeshit. Like when we bend over or take our shirts off, we're giving them that freedom. And that's what rock 'n' roll always was. Like, people snuck out to go see Joan Jett, and their mothers would be pissed. And I'm honored to be that girl that gets people out of their comfort zone."

Cyrus faces disapproving older audiences more often than most pop stars; many parents who raised their kids on Hannah Montana are horrified, to say the least, by fully grown Cyrus. But, as she told Elle, she sees her cultural role aligning with other defiant cultural icons like prime Michael Jackson.

7. On having a career in the public eye

"I went from people just thinking I was, like, a baby to people thinking I'm this, like, sex freak that really just pops molly and does lines all day. It's like, 'Has anyone ever heard of rock 'n' roll?” There's a sex scene in pretty much every single movie, and they go, 'Well, that's a character.' Well, that's a character. I don't really dress as a teddy bear and, like, twerk on Robin Thicke, you know?"

In a world where Oscar winners frequently strip down and go home with the gold, Cyrus is all too aware of the hypocrisy behind the hypercriticism of her sexuality. For some reason, musicians are rarely acknowledge as performers too; their performance and personal life are always merged. Cyrus is self-consciously a performer, as she explains to the New York Times, but she's treated like a deviant.