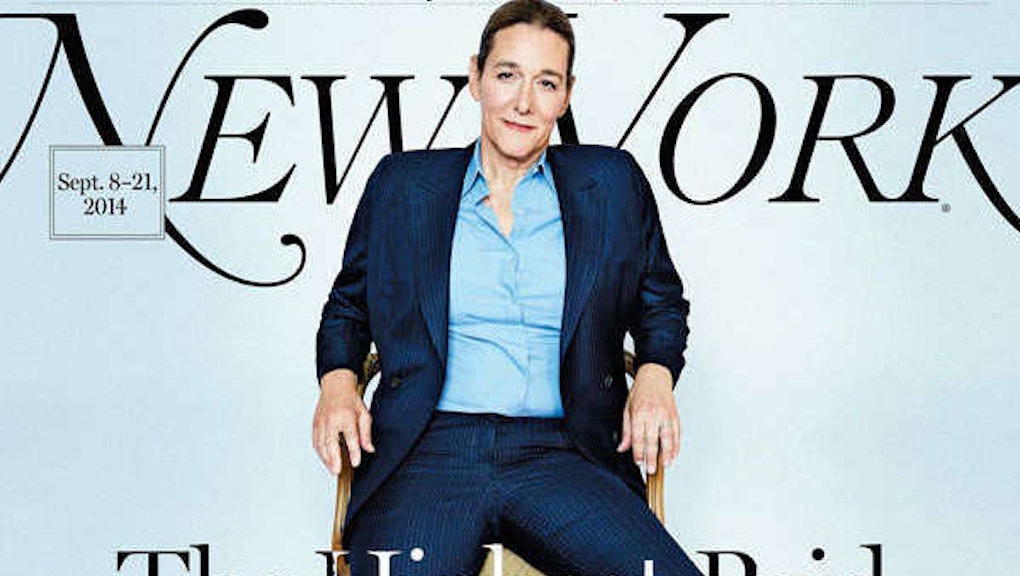 13 Images Show What a True Cover Girl Looks Like

When women make the covers of magazines, it's not always to send an empowering, or even all that positive, message. While American pop culture certainly needs more equal representation when it comes to featuring women, LGBT folk and people of color, magazines in particular have struggled to elevate these underrepresented groups and their achievements. Take this magazine stand display I came across in New York City:

While the man in this display is portrayed as a powerful business leader, the two women chosen to grace their respective covers only converse about relationships or how to stay in shape. What's the message this kind of "representation" is sending to readers?

Far too often, women find themselves relegated to discussions about getting married or looking pretty, both of which also imply a woman's worth is tied up in the way others (read: men) view and evaluate her. It's reductive, insulting and overlooks so many women who deserve the same recognition as their male counterparts — with or without a so-called bikini body.

So what does a real "cover girl" look like? Here are a few women demolishing stereotypes (along with glass ceilings) while gracing magazines across all different kinds of interests and professions. This non-extensive list highlights just a few of the most prominent role models who have beaten the odds to truly represent on America's newsstands:

At age 59, Martine Rothblatt has already accomplished a huge amount. In a desire to help her daughter, who suffers from pulmonary hypertension, she founded United Therapeutics. The gamble paid off, both as a parent and as a business leader: As the CEO, Rothblatt earned $38 million last year. While the wording of New York Magazine's headline has been criticized by some LGBT advocates as being sensationalized, Rothblatt deserves all the credit for putting herself out there in such a public way. Given that only 5% of Fortune 500 CEOs are women, and that none of them are openly transgender, this cover girl is a champion for diversity of all kinds.

Only a single Little Leaguer has ever graced Sports Illustrated, and you're looking at her. The 13-year-old who plays with Philadelphia's Taney Dragons started breaking records long before she made it on the magazine's cover. According to Fox Sports, she was "the first girl to throw a shutout in the Little League World Series." Since then, she's been in the spotlight, from appearing on Late Night with Jimmy Fallon to making public appearances at athletic events.

Hillary Clinton has had her fair share of sexist media coverage. Whether it was the horrendous Clinton-inspired Time cover from January or the insulting New York Times Magazine illustration from the same month, there's no shortage of how the mainstream media has fallen short when it comes to depicting a woman, many believe she could be America's first female president.

But despite the media's obsession with her, for good and for bad, Clinton has continued to find a way to come out on top. A U.S. senator and secretary of state, Clinton's record of service speaks for itself at this point, making misogynistic and slanderous attacks seem like little more than jealous chatter. Whether she'll be running for president is still unclear, but Clinton's strength in the face of an almost unprecedented barrage of sexism has given women everywhere a role model to look up to.

Dubbed "America's greatest athlete" by the New Yorker and "the greatest American tennis player ever, male or female, no asterisks" by Forbes, Serena Williams has spent the last decade proving why very few people may ever be as good at anything as she is at playing tennis.

With her distinctive power — not to mention fashion sense — Williams has dominated her competition, winning a total of six U.S. Opens (three in a row), culminating in her victory Sept. 7 with her 18th Grand Slam.

When Laverne Cox graced the cover of Time magazine earlier this year, Americans celebrated all across the country, and for good reason. The first trans woman of color to be featured in a leading role on a mainstream and scripted television show, Cox was also the first openly transgender person to be nominated for an Emmy award. A true pioneer for LGBT, especially transgender, people on and off the screen, Cox has used her newfound fame to raise awareness of numerous causes, helping to create a safer world for people of all identities.

Now a contributing editor at Marie Claire, Janet Mock rose to prominence after she was featured in a 2011 article candidly sharing details of her life growing up while transgender. Since then, we've seen her act as a vocal advocate for transgender rights, spreading her message of awareness and acceptance everywhere from Piers Morgan's show to the Colbert Report. Mock's book, Redefining Realness, has recently became a New York Times bestseller. An inspiration to women everywhere, Mock has taught many how to love every part of themselves, indiscriminately.

Jane Goodall is simply legendary. Her research on chimpanzees in Tanzania has benefited the world far beyond the scientific community. She became a household for every girl growing up loving monkeys (hi!) and gave them someone they could look up to. When she's not spending her time advancing public knowledge on chimps, she is galvanizing social change through her youth engagement initiatives like Roots & Shoots, a campaign that helps young people get involved in community solutions and environmental conservation.

Janet Yellen was the first woman to be nominated for chair of the Federal Reserve, but don't go calling her "chairwoman." Despite her outstanding accomplishments as a lady boss, she doesn't want to be singled out based on her gender. Even after President Obama called her "Mr. Yellen" by mistake, she didn't flinch. As Ylan Q. Mui points out at the Washington Post, Yellen wants her work to speak for itself. She has no intention of letting her critics question her competence based on the fact that she has a vagina.

Given that she's been trusted with handling 16 trillion dollars, I think we can all agree she's on track to accomplish this.

When Nancy Pelosi became the first female speaker of the House of Representatives in 2007, Ms. Magazine was the only mainstream publication that bothered to put her on the cover. Given that women are a majority of the population, yet still only make up roughly 20% of those elected to congressional office, it was a little shocking to see the media's omission of such a historical event.

As the magazine explains, since being first elected to Congress in 1987, Pelosi has made women her first priority. A vocal supporter of the Lilly Ledbetter Fair Pay Act, Pelosi was instrumental in its passage. She also acted as a major force in the implementation of the Affordable Care Act.

Whether on the cover of Vogue or Essence, Michelle Obama always inspires. An active first lady, Obama has implemented programs to combat childhood obesity and build a healthier America. Equally passionate about social justice, she has been vocal about causes that concern women at home and abroad. Her involvement with the #BringBackOurGirls campaign was just one of the ways Obama has made it her mission to elevate the rights of women and girls.

Despite a controversy over the star's revealing outfit, Time's decision to put Beyoncé on the cover of its most influential people issue was largely celebrated as a step in the right direction for women. This certainly wasn't Beyoncé's first cover, but it was one of the most historic. Since the award-winning pop icon came out as a feminist in March 2013, she's put women and feminism at the forefront of her message.

The Democratic candidate for the upcoming Texas gubernatorial race thundered onto the national stage last year, taking an impassioned stand for reproductive health care that was broadcast around the country. After delivering a 13-hour filibuster to try to block an anti-choice bill in the Texas Senate, Davis became a hero to anyone who believes every woman has the right to choose.

Davis recently took her commitment to reproductive justice even further when she made headlines for telling the story of her own two abortions. Many believe she might have what it takes to turn the notoriously Republican state blue.

Malala may only be 16, but she's already made a lasting mark on the world. After surviving being shot in the face by Taliban forces, she became an international symbol of pacifism and courage. She's made it her life's mission to spread her message of peace across the world by doing things like spending her 16th birthday giving a speech about the importance of female education.