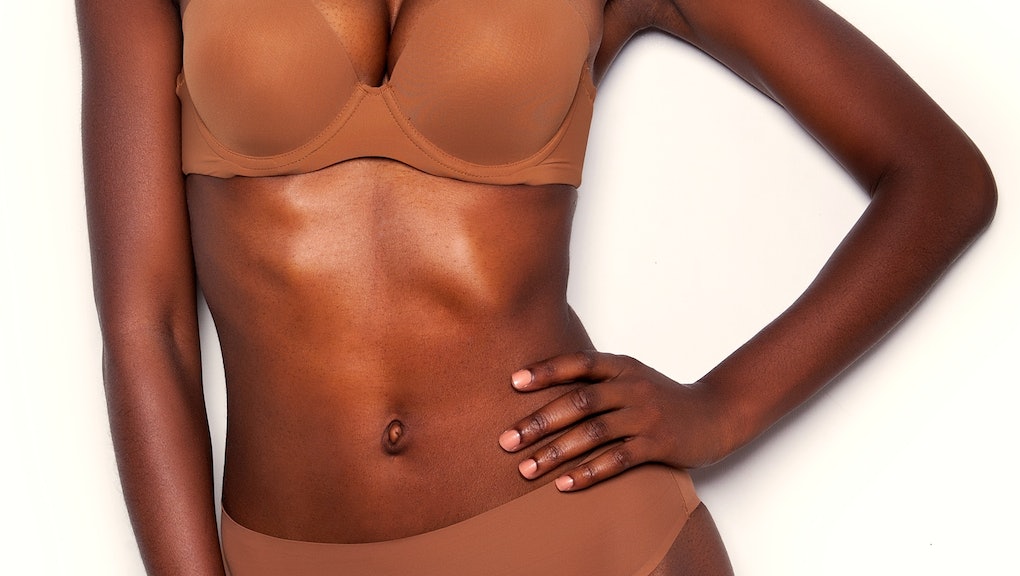 Finally, a Lingerie Company That Understands 'Nude' Isn't a Just Synonym for 'White'

For far too long, "nude" bandages, "flesh"-colored bras and the complete lack of foundation colors in the local drug store have been a source of frustration only women of color can truly understand.

Now, one company is hoping to change that, thanks to their new line of flesh-colored lingerie made specifically for all shades of the spectrum, slated to hit the market this October.

Think this isn't that big of a deal? E-commerce site Nubian Skin notes that for many women of color, choosing an appropriate undergarment is a special brand of frustrating: "It's the grand debate: What do I wear under a white or sheer blouse? What color hosiery will go with these amazing shoes? Black just isn't going to work. The simple answer is nude. But my nude isn't the nude I see in shops. Despite the reality that women of color have the same needs as all women when it comes to lingerie and hosiery (and spend the same of their hard-earned money), the industry simply doesn't cater to us."

And thus, Nubian Skin was born.

While it may seem superficial to say that a lingerie line is a form of progress, Nubian Skin's founder believes it is actually representative of a changing world. "It's about representation and the freedom to express yourself however you want," the founder, who wishes to remain anonymous until after the launch, told Mic.

"I doubt that I'm the first person to have thought about this, but I think that it definitely hasn't been done on a large scale or by any mainstream company," she said. "Lingerie is something that's incredibly personal, and the people who are generally running these large companies are older white men, and so the last thing on their mind would be, 'What am I going to wear under my top to make sure that it's not possible to see through it?'"

It doesn't hurt that there's a burgeoning market for this type of entrepreneurship. Black women are among the highest portion of the consumer market. Indeed, according to a 2013 Nielsen report, blacks have $1 trillion in buying power and a tendency towards strong brand loyalty. Given the need for lingerie in this market, Nubian Skin is just good business. Look at how the rise of the "natural" hair movement has forced mainstream companies like Pantene to expand their product line, targeting black women specifically, whether they have natural hair or relaxed tresses.

Then there was Lancome's selection of Oscar winner Lupita Nyong'o as the face of their latest campaign, yet another example of a cosmetics company acknowledging that women of color exist and really do come in all shades and undertones.

Still, Nubian Skin stresses that it's not just about the money. "I do think that part of the problem is that people in positions of power don't necessarily have the same experience, but also part of it may just be that certain groups of people are just ignored," the founder told Mic. "Certain groups are seen as safe, because the mainstream feels like they understand them and how they operate, and so products are made for that group to the exclusion of others."

As demographics continue to shift in the United States towards more black and brown consumers, "[c]ompanies must address these markets. I would love to say that there would be a massive transformation across the board overnight, but there's a long way to go. I don't think there will be a watershed moment."

Ultimately, Nubian Skin exists because no woman should be limited due to the color of her skin. "It's such a simple thing to be able to wear what you want to wear and look how you want to look," the founder said. "Being able to express yourself the way you want to is a universal right. Why shouldn’t women of color have this?"