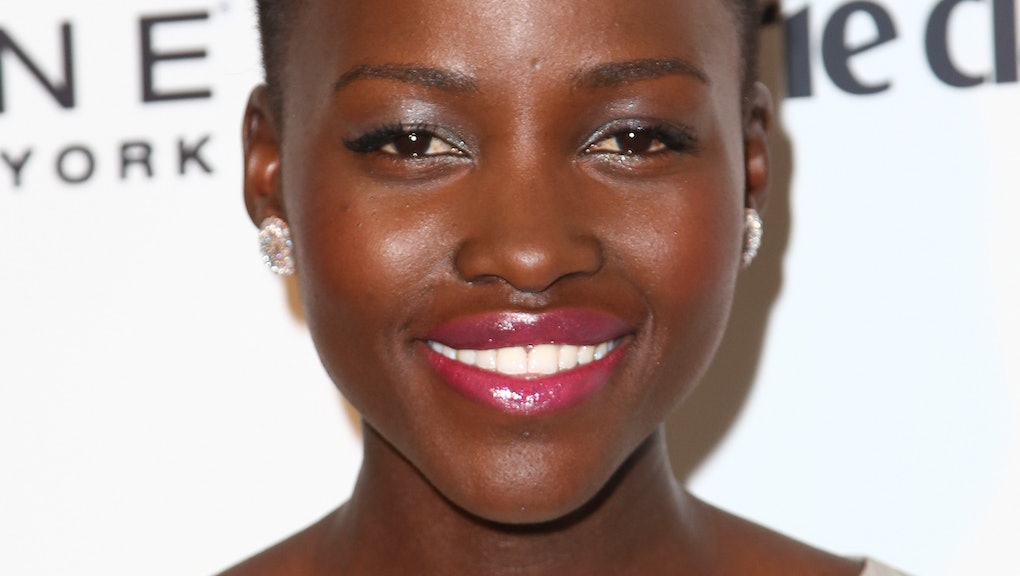 Lupita Nyong'o’s riveting performance in 12 Years a Slave skyrocketed the 31-year-old newcomer to the Hollywood A-list. Millions of women rejoiced at the prospect of a stunning woman of color becoming the belle of the ball, and the news that she'd been tapped by Lancôme cosmetics to be their new brand ambassador.

Unsurprisingly, however, not everyone is #TeamLupita. Nigerian pop singer and skin-whitening products purveyor Dencia didn’t take kindly to being name-checked by Lupita during an unscripted portion of her acceptance speech at Essence's Black Women in Hollywood Luncheon in February. After telling a story about a fan letter from a young girl who'd reconsidered buying Dencia’s "Whitenicious" skin bleaching cream, Lupita spoke eloquently about finally accepting her own skin.

"I want to take this opportunity to talk about beauty, black beauty, dark beauty," Nyong'o said. "I remember a time when I too felt unbeautiful. I put on the TV and only saw pale skin, I got teased and taunted about my night-shaded skin. And my one prayer to God, the miracle worker, was that I would wake up lighter-skinned. I tried to negotiate with God: I told him I would stop stealing sugar cubes at night if he gave me what I wanted, I would listen to my mother’s every word and never lose my school sweater again if he just made me a little lighter. But I guess God was unimpressed with my bargaining chips, because He never listened."

After the speech, Dencia took to Twitter with a rant slamming the actress, saying,” A girl wrote u a letter? lol thru which email when I just checked ur twitter n can’t see an email address!!Ir pr tried n thanks 4 the Pub,” and “Oh and @lupitanyongo [couldn’t] talk about the bleaching creams white people (Companies) make cause the white man pays her, they own her!"

Perhaps predictably, when Lancôme announced this week that Lupita would be its very first black female brand ambassador, Dencia chimed in, again alleging hypocrisy. Her critique hinges on the fact that the French cosmetics manufacturer also sells numerous "skin brightening" creams under its Blanc Expert label.

But this argument misses the point. In fact, such creams have been marketed specifically to people of color for generations, and have always been controversial. But they exist in no small part because of a demand exemplified by Dencia herself, a person who frequently promotes her skin bleaching cream to the point of unhealthiness. Cosmetics companies all profit from people’s insecurities, and because women of color are constantly bombarded with images of white, blonde, thin and able-bodied women, it’s no surprise that even Lancôme makes a product designed to chemically brighten — or lighten — the skin.

But that's precisely why the cosmetics industry needs Lupita now more than ever. A world where creams are marketed to women of color to chemically strip their skin of pigmentation desperately needs a "possibility model" — someone who young people can look to as an example of how to live out their dreams no matter who they are or how they identify, as explained by Orange is the New Black star and activist Laverne Cox. Far from legitimizing the industry, it seems that Lupita may be the catalyst for a transformational moment in mainstream beauty norms, as popular culture realizes that darker hues are more than an "exotic" curiosity or hypersexualized fetish.

From her position at Lancôme — and now as one of Marie Claire's Fresh Faces cover girls — Lupita may be able to finally change the dialogue surrounding black beauty. Young black girls rarely, if ever, see people who look like them held up as aspirational models, self-possessed and neither degraded nor objectified. Lupita fills this long-standing and pervasive void, representing a new vision of beauty for a Western audience resistant to change.

Kerry Washington’s breakout success on ABC’s drama Scandal is newsworthy because it’s the first time in almost 40 years that a network drama has a black female lead. Women of color remain underrepresented in all facets of media, most notably fashion and beauty. In a survey of over a dozen popular magazines, the Huffington Post found that 82% of women on the covers were white.

And on the rare occasion a woman of color does grace a mainstream magazine cover, it’s normally just a handful of faces, many of them lighter-skinned. In the past, black women have had to settle for the likes of Beyonce, Halle Berry or Rihanna, women whose beautiful visages frequently appear in magazines but nonetheless leave many shades of women unrepresented. Now we have Lupita's face on the cover of Marie Claire.

Yet beyond mere symbolism, Lupita’s willingness to speak openly about the challenge of accepting her own skin is a message that resonates with a generation flooded by images that create insecurities and allow them to thrive and persist. From "mammy" to "jezebel" to "sapphire," black women have always had to deal with negative stereotypes of themselves promoted in mainstream media. A few years ago, Psychology Today even felt it necessary to publish an article declaring black women uglier than others, and claimed to have the junk science to prove it. While the backlash was loud and swift, it was yet another moment where the value and beauty of women of color was misappropriated.

Put simply, black women are often portrayed as asexual undesirables, hypersexualized objects littered throughout popular video games, music and movies or as "sassy black women." In her book Sister Citizen, Professor Melissa Harris-Perry says enduring these negative stereotypes is equivalent to trying to stand and find your balance in the "crooked room" that is America. These distorted images and the constant reinforcement that European features are more beautiful contribute to low self-esteem and surprisingly high rates of eating disorders among women of color. That’s why the deal with Lancôme matters more, and should echo louder than, any of Lupita's critics.

When the actress says, "I think Lancôme has a range of products for every woman, and I think having me will expand people’s understanding of, hopefully, what Lancôme stands for, who Lancôme is for," it sounds to me almost like a challenge to cosmetics companies to expand their own marketing principles.

Lupita’s universal appeal and colorful brilliance comes at a time when the images of women in popular culture are more white, more sexualized and less representative of an increasingly diverse America. Lancôme's choice to make Lupita the face of their brand could therefore be a transformational moment, a clean break from the problematic images of the past.

Furthermore, Lupita’s authenticity and willingness to engage with women about their insecurities as they navigate this complicated intersection of race and gender provides a whole new example to look up to. Talk about possiblities!