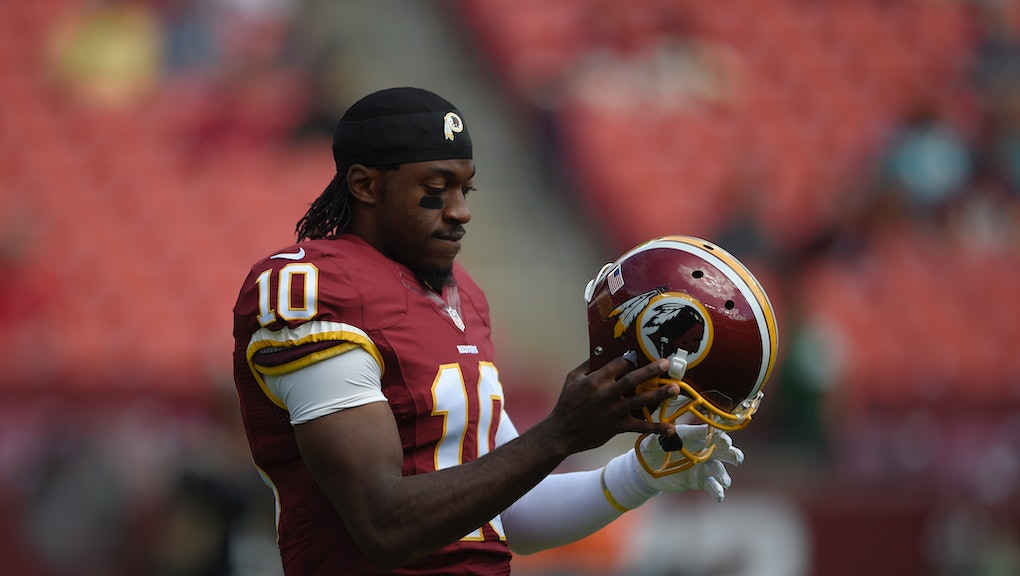 An Inside-Out Shirt Has Created Another NFL Controversy

Washington Redskins quarterback Robert Griffin III was prepared to address members of the media on Sunday wearing a T-shirt emblazoned with an unmistakable Christian message. Representatives from the NFL stepped in before he reached the podium and told him to turn it inside out.

When pictures of Griffin wearing the shirt right-side out just before the press conference surfaced, many Christians claimed he was being unfairly persecuted for his beliefs, using the old "Michael Sam kissed his boyfriend on TV, won't someone please think of the children" canard to illustrate their outrage.

Thanks for the clarification, folks.

The shirt essentially said that all non-Christians could never know peace — hardly the inclusive message that a franchise quarterback with dozens of endorsements should broadcast. But some claimed that by forcing Griffin to turn the shirt inside out, the NFL was persecuting him for his Christian beliefs.

However, as is usually the case whenever a majority population cries persecution, the ire was completely unjustified.

As the local CBS affiliate pointed out:

According to NFL bylaws, players are prohibited from wearing clothing with personal messages on game days."Throughout the period on game day that a player is visible to the stadium and television audience, including in pregame warm-ups, in the bench area and during post-game interviews in the locker room or on the field, players are prohibited from wearing, displaying or otherwise conveying personal messages either in writing or illustration, unless such message has been approved in advance by the League office."

The third-year signal-caller's Christian beliefs had nothing to do with the NFL's decision. Nor did ESPN's broadcast of Sam's celebration after being drafted earlier this May.

On the contrary, Christian imagery is everywhere in today's NFL. Athletes thank God in post-game interviews, point to the heavens after a big play and so on. In fact, one of the biggest NFL stories of the past decade was the emergence of Tim Tebow. It could be argued that the main driver for Tebow's fame as an NFL player was that he was a photogenic, devout, white Christian. When he was unable to land a starting gig, many fans felt he too was being persecuted for his beliefs — unlikely, considering his trademark prayer-celebration became an actual meme. His beliefs couldn't have been that off-putting.

In reality, it probably had more to do with the fact that he couldn't throw a football accurately, a skill that's not unimportant for successful NFL quarterbacks.

Griffin and his supporters should probably focus more on his play, rather than what he's wearing. His performances last season were extremely underwhelming relative to his spectacular rookie campaign, and he'll potentially miss the rest of this season due to a recent ankle injury. Both are much bigger threats to his career than his sartorial choices.