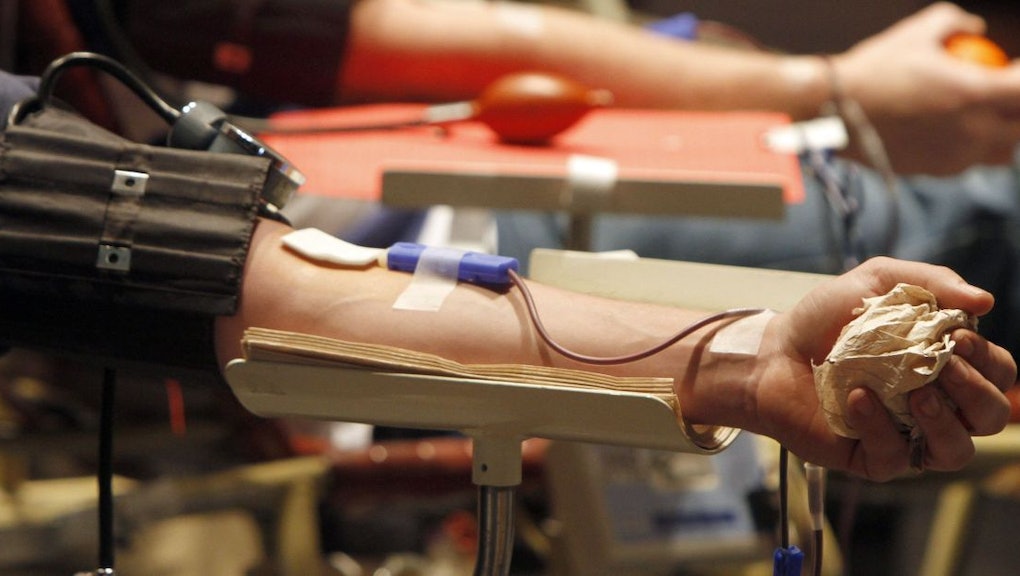 According to a new report from the Williams Institute, a think tank at the UCLA Law School "dedicated to conducting rigorous, independent research on sexual orientation and gender identity law and public policy," lifting the ban on men who've had sex with men (MSM) from donating blood could save million of lives every year.

Since 1977, the FDA has banned all men who have ever had sex with another man from donating blood. But in recent years, countries like the U.K. and Canada have lifted similar bans, recognizing the inherent and unfounded homophobic stereotypes of these laws. And based on the new research findings, it's time for the U.S. to do the same.

The numbers: The researchers considered a number of possible policy change scenarios to determine roughly how many more men would be eligible to donate given less out-of-date restrictions.

If the ban was changed to the "past five years," the report estimated that 172,000 additional men would donate an additional 293,400 pints of blood.

If it was changed to the "past 12 months," those numbers change to 185,800 additional men who are likely to donate 317,000 additional pints of blood each year.

This would be major: For one thing, these changes would be a great help to America's constantly in-need blood donor supply. The study's authors wrote that lifting the ban on MSM donors could increase the total annual blood supply by 2-4% (which would be a serious boon to a potentially flailing American Red Cross). Based on Red Cross figures and the authors' estimate, this would translate into saving more than 1.8 million lives a year. Nearly two million people saved, just by simply removing an outdated and unfair restriction.

But on top of that, removing this restriction would be a major step in the right direction for the FDA to recognize the basic human rights and decency of gay men. As Mic's Derrick Clifton writes:

Essentially, this is an issue that should have been settled a long time ago. Sex between two men is a normal, healthy human behavior if practiced with personal health and safety in mind — just as any other sexual encounter. It's unfortunate that despite all the progress America has made in terms of LGBT rights this decade, the FDA and the HHS refuse to let go of a 30-year-old stigma.

While there may have been a time in FDA history when such a ban was viewed favorably (likely during the rise of the then-poorly understood HIV epidemic), the science is clear: Not all gay men have "dirty" blood.  It's time to lift this ban and save millions of lives. It's just the right thing to do.