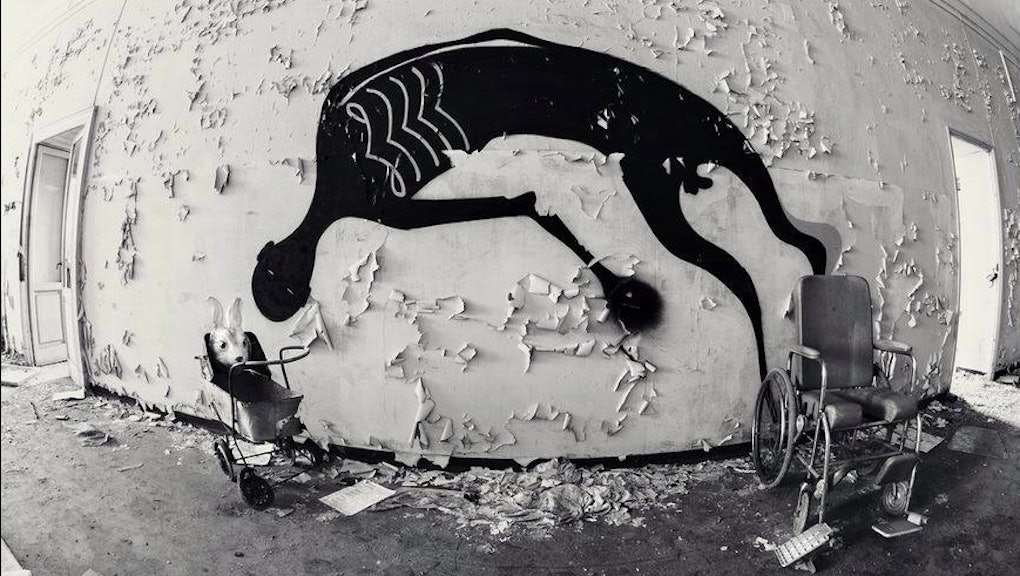 It's common to think of art as inaccessible, or to make it precious by only showing it in museums and galleries. Many question this perceived elitism, and are taking over abandoned or underused buildings, turning common spaces, forgotten spaces, into areas to view art and make a statement. Art should be, after all, accessible to everyone.

All of these highlighted projects, and their placement, raise important questions about artistic context, sustainability, development and the role of art today, particularly in calling out social and economic injustice.

Below are nine abandoned buildings taken over by artists and used as beautiful, unconventional art galleries. With this strain of transformation, these artists are proving once again that art can happen anywhere, that art can make grand and beautiful statements and that art is for all.

Les Bains Douches was established in 1885 as a luxurious Turkish bathhouse, but by the 1970s, it had become one of the premiere dance clubs in Paris. As a club, it was a cultural icon, a social mecca for the artists and celebrities of the '70s and '80s. In the 2000s, Les Bains became financially unstable, and it closed entirely by 2010.

Abandoned buildings across Johannesburg have been turning pink. Why? An urban experiment called #BewareofColour. The project is a guerrilla art campaign designed to highlight urban decay and political neglect. Economic and political instability have left many buildings in Johannesburg neglected by the city for years, even decades, resulting in potentially unsafe environments in urban centers.

The Guardian reported that nearly 30 Johannesburg artists pitched in to help the project's leader, New York-based artist Yazmany Arboleda. They use washable hot pink paint to draw attention to these empty, forgotten buildings, redefining the popular conversation about community, art and development.

Nikita Nomerz is a Russian artist putting a face to abandoned buildings and industrial structures around Russia. Like many of the other artists on this list, he has a background in street art, installations and intervention art. These pieces provide a playful, even subversive, perspective on these abandoned buildings. Where others may see waste, Nomerz sees opportunity.

This painting, called "The Big Brother," is in Nizhniy Novgorod, Russia. It's part of his series The Living Wall, which seems to have begun in 2010 and completed almost entirely in Russia presenting a humor we don't often see.

It's called "Ziggurat," and it's made of more than 6,000 wooden floor-bricks. This installation was built by Scott Hocking in Detroit's abandoned Fisher Body Plant 21. In the 1980s, General Motors abandoned the car manufacturing plant, and it has remained vacant since. Scrappers have removed everything of value, and the EPA has removed anything they consider hazardous. The abandoned plant is currently a destination for scrappers, artists and the curious.

"Ziggurat" was constructed of thousands of creosote-preserved floor blocks found in the abandoned factory. The pyramid took eight months to build, but was destroyed when the EPA removed the creosote blocks, according to Hocking's website.

Herbert Baglione is an eccentric Italian artist, and the creator of 1,000 Shadows, a recent international project composed of installations and paintings featuring humanoid shadow figures in unexpected places. This particular painting is in an abandoned school for infants in Djerba, Tunisia. Baglione also completed another beautiful 1,000 Shadows installation in an abandoned psychiatric ward in Parma, Italy.

Often he places these shadow figures in abandoned buildings or transitional spaces, highlighting the passage of time and physical memory. Baglione is actively promoting the 1,000 Shadows project at showings around the world.

Heather Benning is a Canadian artist most well-known for her experimental performance art piece "The Dollhouse." This eight-year-long project centers around a farmhouse abandoned near Sinclair, Manitoba, in the 1960s. In 2005, Benning acquired the home and spent more than a year restoring and refurnishing the house, turning it into a '60s-era life-size doll house. She also replaced the northern wall with Plexiglas, for the full doll house effect. The house opened to the public in June, 2007.

After six years, it became unsafe. In March 2013, "The Dollhouse" was burned to the ground.

An abandoned hospital in downtown Sao Paulo is currently housing pieces by many of the big names in contemporary art. The hospital and gardens are set to be renovated, but before they are, a collection of international artists created ephemeral works to fill the space. The stunning artistic takeover of Cidade Marazzo was organized by Feito por Brasileiros.

The event was launched at the Sao Paulo Biennial. It highlights the potential for peaceful, sanctioned, yet unconventional art in urban areas.

As Mic has shown before, the street art scene in Ukraine is very active. The Black Circle Festival is an annual gathering of artists and DIY-ers hosted in a different Ukrainian city each year. "Hosted" is not quite accurate; the artists collectively descend on a cluster of abandoned structures and take them over for a few days.

Each artist works wherever and however they choose. Some familiar artists are consistently represented, though new talent also participates. French street artist Seth was involved in a video that goes behind the scenes of the event and provides insight into the community.

The Brighter Bushmills Project is a government and corporate-funded effort to revive downtown Bushmills with art. This city in Northern Ireland was once home to a famed Irish whiskey distillery. After that industry for the most part left the city, its economic strength has diminished.

In an effort to revive the city's downtown economy and mask the number of vacant buildings downtown, the government launched the Brighter Bushmills Project headed by Hélène Byrne and Louie Winward of www.dunseverickart.com. For the most part, it features paste-ups, stickers and wall paintings of images of full, busy shops. It's a kind of idealized version of the town. See the after picture above, the before picture below.