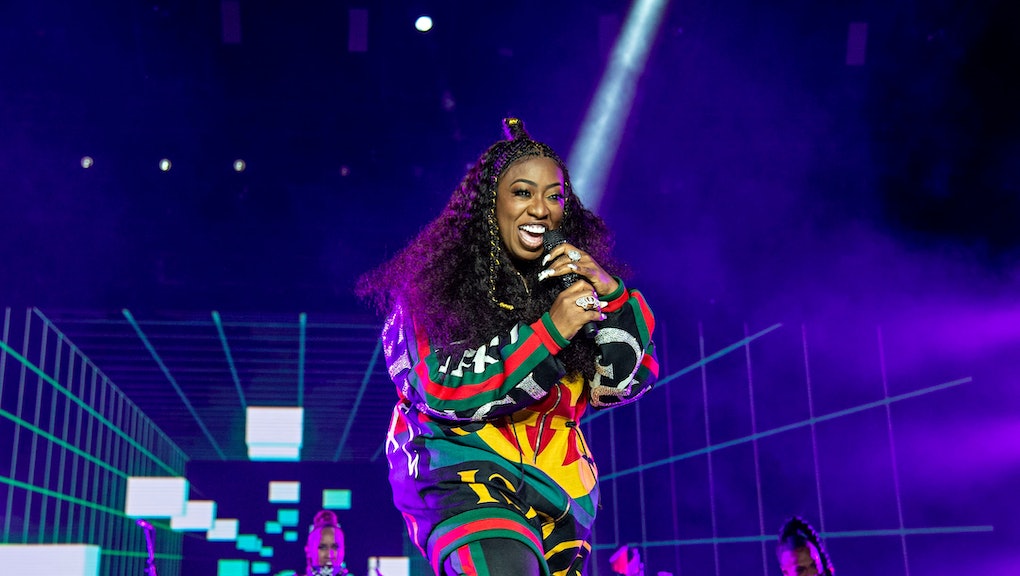 Around the one-minute mark of Missy Elliot's iconic music video for her 2002 single "Work It," she leans forward, offers out her palm — which is covered in white fingerless gloves — and presents a pile of dark fuzz. She's dressed head to toe in baby blue, rapping the words "Call before you come / I need to shave my cha cha." It's only a brief moment in a video that's so witty, so entertaining, and so legendary, that looking away for just a second could mean missing something. That's not unique to "Work It," either. Missy Elliot has been at the helm of culturally definitive music videos her entire career. And now, she's finally getting the recognition she deserves.

On Monday, MTV announced that Missy Elliott will be the 2019 recipient of the Michael Jackson Video Vanguard award at the Video Music Awards. She’s already been nominated for 41 VMAs over the course of her career, winning seven, including Video of the Year for "Work It," in 2003. She also won VMAs for 2005’s "Lose Control," and "We Run This," and for 2008’s "Lady Marmalade."Her most recent VMA nomination is from 2016, for the choreography in "WTF."

There are also the videos Missy Elliott didn't win awards for, but certainly deserved to. "One Minute Man," "Hot Boyz," "The Rain (Supa Dupa Fly)," "Pass That Dutch," and "Get Ur Freak On," to name a few.

“Missy’s impact on the music landscape is indelible,” Bruce Gillmer, Viacom’s Head of Music and Music Talent, said in a statement to Rolling Stone. “Her creative vision across production, performance, and songwriting is unmatched.”

In a statement, MTV described Elliott as "a groundbreaking solo superstar, pioneering producer, songwriter, singer, rapper and cultural icon who has transformed the global music scene."

"Earlier this year, she was the first female hip-hop artist inducted into the Songwriters Hall of Fame," the statement continued. "Elliott has an honorary doctorate from Berklee College of Music, and she is the only female rapper to have six studio albums certified platinum, including her debut 1997 album 'Supa Dupa Fly' and her 2002 blockbuster 'Under Construction.'"

Elliott's Vanguard award comes after a wave of supporters – namely Crissle West and Kid Fury – spent years calling for her to receive the honor. Elliott gave them a shout out when she tweeted about accepting the award.

"I am Humbly Grateful to be receiving the Michael Jackson Video Vanguard Award," Elliott wrote on Monday afternoon. "I Thank my FANS "Supafriends" who fought diligently to see this day come."

According to Rolling Stone, following HBO's documentary Leaving Neverland, it was speculated that MTV would change the name of the award due to the allegations made against Jackson in the film. As of now, the award will keep the name, which it has held since 1991, though the award has been handed out since the inaugural VMAs in 1984.

Elliott will become the first female hip-hop artist to receive the award, and joins join previous Vanguard winners, Beyoncé, Guns N’ Roses, Britney Spears, Kanye West, Rihanna, and P!nk. Her performance at the 2019 VMAs later this month will be her first time back on the award show's stage since 2003, when she performed "Work It," right after Britney and Madonna's onstage kiss. The awards will be hosted at a yet-to-be-disclosed location in New York City.