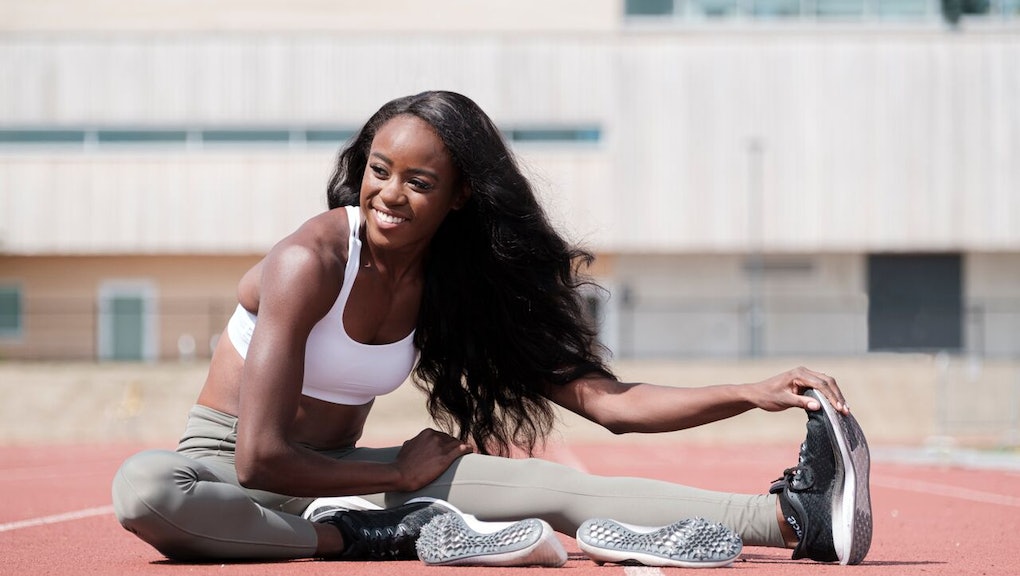 I run, but I’m not a "runner." I’m the kind of person who buys the most expensive running shoes I can afford, runs as long and fast as seems manageable, and just hopes for the best. But just because I'm not a professional doesn't mean my body doesn't need to restore and repair after a run. Running recovery is an underrated virtue that can help you maintain a steady and effective routine, as well as keep your body safe and strong.

Since I'm in no position to advise on best practices (but could really benefit from learning them), I asked Jasmine Blocker, world champion sprinter and Lululemon global ambassador, to advise on the best post-run recovery techniques.

“Recovery depends on how fast and far you’re running,” Blocker says. In other words, how you cool down and reset is going to be a little different depending on your habits. If you sprint, you're likely to have a lot of lactic acid buildup in your muscles. Blocker describes that sensation as, “a burning through your entire body. It’s unmistakable. Distance runners will almost never feel that way.” This difference is important, she says, because while some running recovery habits are mandatory, others aren’t one-size-fits-all. “Give yourself what you need,” she says, “and don’t do things that you don’t need to.”

You can delve into the nuance when you get there, champ, but in the mean time, here's what everyone should do after a run.

I know you’re tired after a hard run, but not taking the time to cool down is an amateur move. Blocker says she runs a few laps after sprinting hard. Let’s be real, her lightest jog is probably akin to most folks' fastest sprint, but you still need to at least walk it out. If you go straight from running to a standstill, it’s confusing for your heart. It pumps faster when you run, and it’s healthier if you move gradually from intense activity to couch potato.

Do some light stretching

“Stretching immediately after a run helps soreness from settling,” Blocker says. I told her that I had heard that you could hurt yourself if you stretched too much after running hard, but she was dubious. “It’s pretty rare to hurt yourself stretching after a workout,” she says. ”Just don’t do any contortions or push your body too far. No complex yoga poses,” she laughs. Light stretching is part of the cooling down process and it will help improve your flexibility.

Water is a given. But "electrolytes will replenish you and get you feeling better,” Blocker says. I tell her that my Roller Derby coach used to have us drink pickle juice after hard bouts. Blocker laughs and says, “She wasn’t wrong. There are just more delicious ways to do it.”

Simply speaking, electrolytes are "minerals that help deliver fluids to the cells that need them and are essential to everything from muscle health to brain function," according to Kelly Pritchett, a spokesperson for the Academy of Nutrition and Dietetics in USNews. They're depleted during strenuous activities. Electrolyte drinks are mostly in the form of minerals and sugars that are added to water; f you sweat a lot when you run, hydrating with them is the move.

Have a protein shake

“You need something light and nourishing to replenish you,” says Blocker. Some nutritionists say that having protein after a workout will help speed muscle repair and therefore will help you recover from a run quicker and with less discomfort.

Those are the non-negotiables. But recovery doesn’t end there. Blocker also suggests foam rolling or percussive massagers. “You can foam roll right after you run or you can do it later when you’re watching TV,” she says. And percussive massagers — electric vibrating massagers that look like a cross between power tools and sex toys —“obliterate” any soreness in her legs, she says.

Blocker also says that sleep is a crucial part of recovery. That’s when all the magic your body does to repair muscles happens. And hey, even if you’re not sprinting to rep, say, the whole United States, you still deserve some beauty rest.

More like this
Studies suggest that Pfizer is no longer the cooler vaccine
By Ian Kumamoto
How to save your skin from climate change
By Melissa Pandika
Uncontrollable, weed-induced vomiting is on the rise, according to new research
By Tracey Anne Duncan
Stay up to date