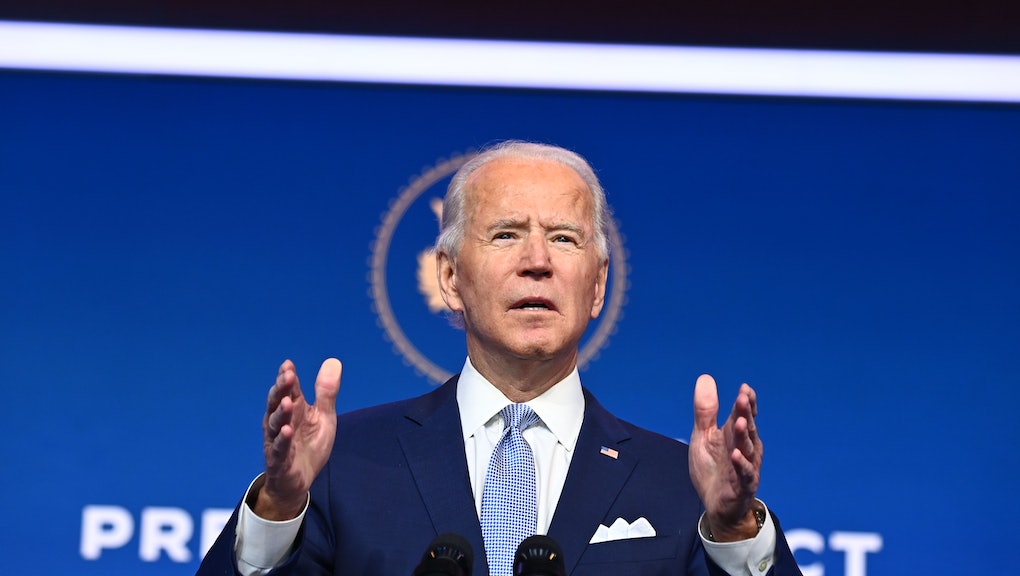 Now that President-elect Joe Biden has begun the official transition process, experts on Capitol Hill are offering their take on what policies should be carried out by the next administration. But no matter what Biden does in the new year, one thing is painfully clear: The country needs substantive economic relief, and fast.

There are two routes that Biden could take to enact economic relief. The first is by working with Congress, though it's likely that will be a fight given that Republicans only need to win one of two Georgia runoff races in January to hold the Senate. The second way is through executive action. Executive orders don't require the consent of Congress, they really just need the president's signature and the cooperation of federal agencies. So what could Biden do on Day 1 to help struggling Americans? Mic has some ideas.

By and large, one of the biggest ways to assist the economy and taxpayers is to eliminate one of the largest drains on the economy: student debt. Biden can sign an executive order immediately cancelling federal student debt, a weight that burdens Black and Latinx borrowers disproportionately.

As Sen. Elizabeth Warren (D-Mass.) wrote on Twitter, a President Biden could immediately give "tens of millions of Americans an immediate financial boost" by relieving them of this debt burden, while also shrinking the disparity in wealth between white families and families of color. Warren, whose most notable proposal during her own presidential run was taxing the ultra-rich to fund initiatives like debt cancellation, wrote, "This is the single most effective executive action available for a massive economic stimulus." The idea has also been cosigned by her more moderate colleague, Senate Minority Leader Chuck Schumer (D-N.Y.).

Moreover, a letter signed by 238 organizations, advocates, and activists written to the incoming administration claimed that cancelling federal student debt would act as an economic stimulus. "Students who graduate into a recession face a 'scarring' effect on their entire careers, leading to permanently lower employment and earnings," the letter reads. "The mere presence of student debt on households’ balance sheets can make it harder or more expensive for families to get other types of credit and fully participate in the economy." With Congress sputtering to get a second stimulus check passed, canceling student debt would be another way of putting money back in Americans' pockets.

Small businesses have suffered tremendously during this economic downturn. An economic report produced by Yelp in September found that nearly 164,000 businesses had closed since March 1, and experts predict that a majority of those closures are permanent. During the 2008 economic recession, minority- and woman-owned businesses were more likely to shut their doors, and the same could be said for this year, with extremely few minority-owned businesses receiving money from the Paycheck Protection Program.

Biden could also direct the Department of Homeland Security to end workplace raids, which hurt businesses, families, and don't make us safer as a country. It's not a direct cash infusion, but it would encourage workers who may not otherwise feel safe to continue reporting to their jobs, which helps keeps these businesses operating and the economy humming along.

Federal unemployment insurance programs are set to end at the end of this year, and a Biden could use executive power in the same way that President Trump did to extend the time period of those benefits. Over the summer, Trump instructed the Federal Emergency Management Agency (FEMA) to redirect its own funds to provide $300 in expanded weekly unemployment benefits to eligible Americans. Trump and Republicans on Capitol Hill had let a separate stipulation under the CARES Act, which expanded unemployment benefits to $600, expire in July.

The program faced a lot of objections, the main one being that FEMA funds are critically important for assisting disaster-struck regions. The other issue was policy longevity: "The program took weeks to set up and only lasted for a month and a half," The Hill wrote. Still, the order "nonetheless put money into people’s pockets without a deal in Congress."

Considering that the HEROES Act, which called for reinstating expanded unemployment benefits, was passed by Democrats in the House in May but has never been brought to a vote in the Republican-held Senate, it would seem wise for Biden to look elsewhere to expand relief for those who lost their jobs due to the pandemic. In addition to enshrining certain safety standards through the Occupational Safety and Health Administration, he could enact a number of direct changes for federal workers and those employed on a federal contracts, including raising the federal minimum wage and expanding overtime benefits.

The Trump administration stripped a number of protections that assist marginalized renters and owners from the Housing and Urban Development, and the Biden White House could direct the federal department to restore those. Some of those measures might include expanding who qualifies for Section 8, or low-income housing support.

President Biden would also be able to sign an executive order halting evictions in federally-backed properties, just as Trump did earlier this year. Trump's most action on the issue, implemented by the CDC, will expire at the end of December, but Biden could sign a similar order preventing landlords from pursuing evictions in federally-backed or -subsidized properties and from charging penalties for things like late payments.

The Biden administration, per The American Prospect, could also direct the Department of Housing and Urban Development to strictly enforce its own rules. For instance, HUD is tasked with enforcing the Fair Housing Act and the Mortgage Disclosure Act, which would hold lenders accountable for discriminating against borrowers. Biden could additionally reverse the Trump administration's destructive approach to fair housing — which allowed the illegal practice of redlining to take place.