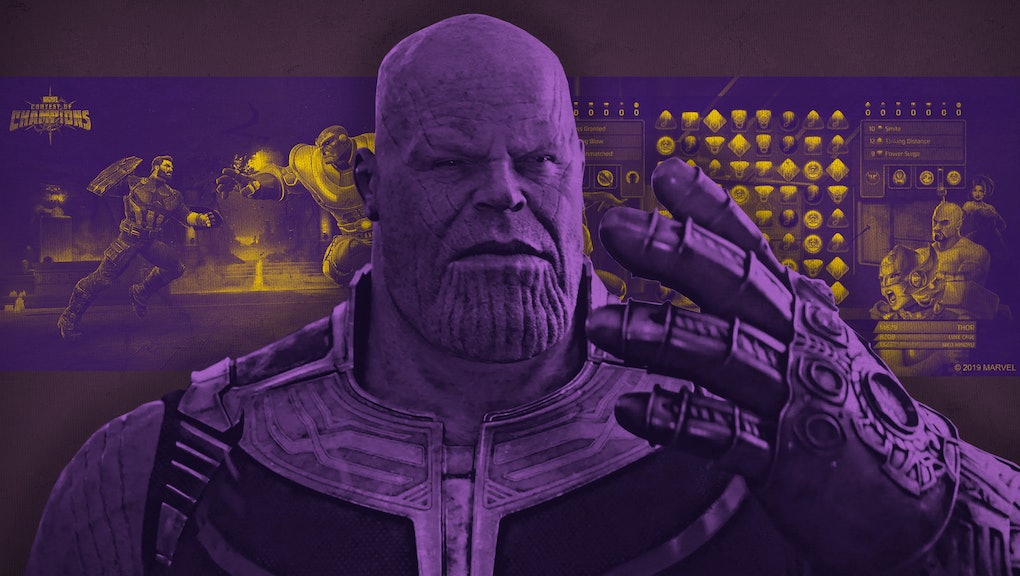 Just because Avengers: Endgame is in theaters and we've already seen the final moments of the Infinity Saga transpire, that doesn't mean you have to stop spending time with your favorite superheroes – at least, the ones you likely won't be seeing again on the big screen. In fact, now's the time to jump in and explore even further. There's a whole world of Marvel game apps where the universe is at your fingertips on the go, bringing you just a little closer to the heroes you've always loved spending time with in their respective fictional universes.

From games where you collect legendary superheroes to make them brawl against each other to LEGO translations of some of Marvel's coolest heroes, there's something for everyone looking to make their Avengers fun last forever.

If you aren't quite ready to say goodbye to those in the Marvel universe you hold dearly, give these apps a try. You won't be disappointed.

LEGO games and Marvel go hand-in-hand, and LEGO Marvel Super Heroes is another pint-sized entry in the series that should quell any thirst for more Marvel characters to play around with on the go.

A LEGO-fied Manhattan is your in-game playground, as the game follows the storyline from Avengers: Age of Ultron and 2012's Avengers. Movies like Thor: The Dark World, Captain America: The First Avenger, and Iron Man 3 are also represented here as part of the game's extended universe. The game is essentially an enormous playground in which you can choose your favorite Avenger and start bashing through LEGO bricks with them as you work to clear out enemy-laden stages.

All your favorite characters have signature moves and outfits, too. Iron Man is rocking the destructive Hulkbuster armor, for example, and The Hulk can perform devastating hyper jumps. LEGO Avengers newcomer Fin Fang Foom can grow to enormous sizes and crush enemies underfoot as he makes his first appearance in the LEGO games with this installment. Each hero can use their own custom suite of abilities, so it's really up to you how you want to approach the various puzzles and challenges sprinkled throughout the game.

There's more emphasis in this game on bringing bigger, more fantastic heroes to the LEGO world with this title, and the game's all the better for it, meaning there's a hero to suit just about anyone's tastes. No matter if you love the established Avengers team or if you'd prefer to play around with deep cuts, this fun little LEGO adventure is definitely worth setting out on.

Sometimes, you don't have the patience to sit down and play a fighting game, even if it is full-to-bursting with both the most popular and oblique Marvel characters out there. That's where Marvel Puzzle Quest comes in. Mobile devices were practically made to host puzzle titles, and this one is modeled after one of the best puzzle games ever seen on a gaming console: 2007's Puzzle Quest.

This Marvel-skinned version borrows several elements from the original Western fantasy-themed game, weaving a narrative out of a fantastic puzzler that's easy to learn but impossible to put down. Players put together a team of their favorite Marvel heroes or villains culled from different story continuities in the Marvel universe, then are let loose to combat each other in turn-based battles of match-3 puzzles.

When you match orbs of one color, it will damage the opposing team. These battles continue back and forth until one party is defeated, and sometimes new characters or items will be granted upon victory. With story and multiplayer modes, there's plenty to conquer even when the narrative has completed. And much like the other Marvel games for mobile devices, it's overflowing with story moments you won't see elsewhere in the Marvel universe. It's easily a game you can invite friends to play as well, since it's so simple to learn.

Take on the role of a being known as a Summoner in Marvel: Contest of Champions, tasked with building up a team of Marvel heroes and villains who will challenge each other in combat. With a fighting arena in which characters duke it out for supremacy, it represents one of the most diverse Marvel games mobile devices have to offer.

It plays similarly to fighting games like Mortal Kombat X, and has you brawling throughout several different game modes to improve your characters' stats. The game is free-to-play with optional transactions so you can buy additional characters, but if you play enough, you can earn them without having to spend a dime. The thrill of the game lies within assembling your own squads of heroes and essentially taking the Marvel universe with you in your pocket.

Choose from characters like Spider-Man, Iron Man, Wolverine, Ultron, Loki, and hundreds more as you earn additional heroes the more you play. You can even assemble the entire Avengers squad to face off against Thanos if you so choose – just in case you weren't happy with the way Avengers: Endgame played out. If you're a big Marvel fan who loves options, this app should be right up your alley.

This free-to-play turn-based RPG is the newest of the crop of Marvel mobile games, having just released in 2018. It follows another story unique to these original on-the-go games, having players face off against the evil Ultimus. Players, referred to as Agents of S.T.R.I.K.E. (Special Tactical Reserve for Interdimensional Key Events) have been pulled in to (once again) create squads of the perfect mix of Marvel heroes and villains to combat Ultimus and his baddies.

This is another game where you can choose from a wide selection of Marvel characters, though this one is unique in that it's receiving a series of new in-game events that revolve around Avengers: Endgame. So while the other similar "collection" titles are content to create their own stories, this one can tie into the Marvel Cinematic Universe. If you want to replay key scenes with your own custom battles where the Avengers basically wipe the floor with Thanos, you can here.

Plus, you can take part in a variety of modes like Arena, which lets you take on squads of 5 in battles where you'll receive a ranking and even prizes based on how you perform. It's very much geared toward a multiplayer audience.

Netmarble's Marvel action role-playing game is one of the most extensive and all-inclusive superhero mobile games yet, and there's plenty to love about the original story that sets the stage. When several dimensions collapse upon each other, Avengers like Thor, Black Widow, and Iron Man have to defend Stark Tower against oncoming threats after battling "alternate" versions of themselves. Nick Fury, the grand puppetmaster he is, informs the player (that's you) that it's time to create a set of new heroes.

That's where you come in. You can choose among 187 playable characters that can be leveled up six different times over the course of the game, gaining different and more powerful abilities and fighting off doppelgangers of famous heroes and evil villains throughout different sets of missions.

When it comes to Marvel games, mobile devices are absolutely one of the best places to look around. Now, when you're leaving the theater having seen Endgame for the nth time, you can keep the action going right from your phone — at least until you move on to the ridiculous amount of console and PC games based on the Marvel universe.