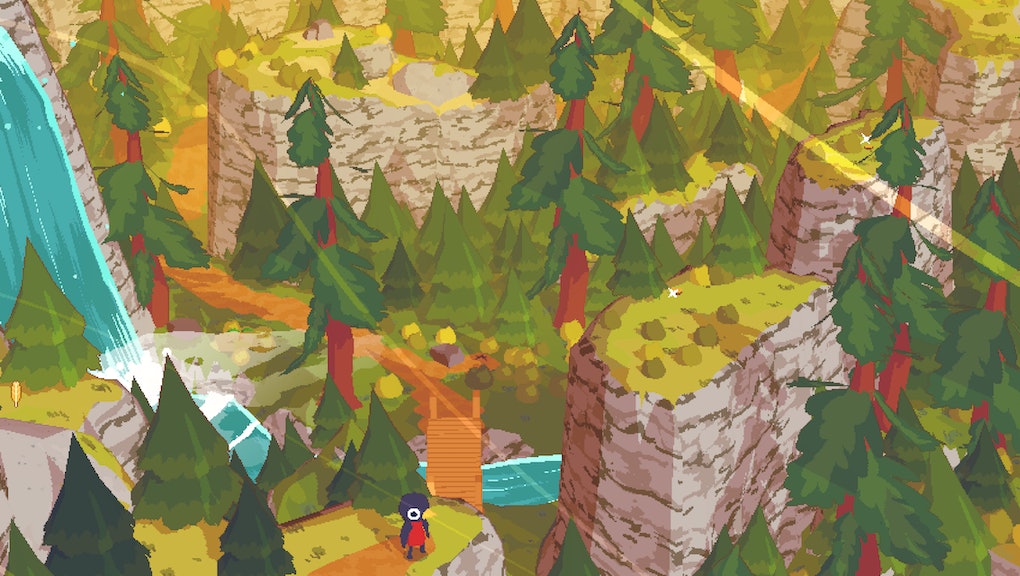 7 calming games to play when you're sick of 'Animal Crossing'

Animal Crossing might be the quarantine game of choice, but that doesn't mean it's for everyone. Maybe watering the flowers feels too much like daily chores, or maybe the design is too cutesy — whatever the reasons, we're not here to judge. There are plenty of other games out there that provide a similar zone-out-and-forget-the-world vibe without utilizing Animal Crossing's gameplay style.

Here's a list of titles that won't ask you to water digital plants over and over.

Tetris plus lo-fi beats equals Tetris Effect, a game named after the real-life phenomenon that occurs when people who have played Tetris for a while start seeing blocks everywhere. It's the classic, hypnotic puzzle game with a twist: It engages as many senses as possible to wash away the outside world. There are beautiful backgrounds that capture your eyes, music and ambient sound effects that block out city noises, and the comfortably numb feeling of the controller vibrating in your hands to the beat.

Whenever I finish playing Tetris Effect, I feel like I'm mentally emerging from a pool of water, slowly remembering everything else exists.

Tetris Effect comes with many different modes to play after you've completed the main 'Journey Mode' on any difficulty (including easy). There are a couple that feature more relaxed rules so you won't be thrown into a game over screen if your blocks reach the top. It's nice to have and makes the game a good one to reach for whenever you're feeling stressed — a recommendation backed by studies that have found playing Tetris can be good for folks struggling with PTSD, intrusive thoughts, and even cravings.

You can find Tetris Effect on the PS4 and PC (Epic Games Store).

The Truck Simulator series are excellent games for people who find driving really relaxing. During a time when traveling isn't an option for most, American Truck Simulator and Euro Truck Simulator 2 might be able to satisfy the desire to watch tranquil scenery go by on a cross-country road trip.

In these games, the player starts out as a freight truck driver making deliveries while gradually moving up the ladder to run a big-rig business all on their own. Each delivery brings cash and can give you leeway to customize your truck, make repairs, and hire additional employees for your trucking empire.

Wait, you might be saying, that sounds a lot like chores. But don't be misled by the premise — this is a driving simulator through and through. Even players and reviewers with no interest in the trucking industry have expressed shock in how quickly they've gotten sucked into the game. It's very easy to burn hours driving along the countryside or through the city, losing yourself in the virtual sights, sounds, and feel of the truck.

As a little bird-being, you have to go on a hike up a mountain to get reception for an important call. There's a way to climb, soar, and hike up there, but the journey is pretty tough. Instead, the game offers players the opportunity to step off the beaten path and gain skills or tools that can make the trip less painful.

A Short Hike is a quick indie game, maybe about 1-3 hours long depending on how you play, and its low cost reflects that. It asks for less time commitment than Animal Crossing by being so short while offering the same, chill activities such as treasure hunting, fishing, and talking with other characters. The game is also more story-driven, with a reviewer for The Verge calling it an "emotional gut punch," and rewards the player's time with a free-roaming ending that allows you to finish catching those fish or taking a different path around the mountain.

A Short Hike is available through multiple digital storefronts listed on the game's website.

The first thing that struck me while playing this game were the comforting sounds of water. The waves whirling on the surface of the ocean, the bubbling of underwater movement, all enhanced by a string orchestra. It's hard not to be immediately sucked into this underwater world filled with towering seaweeds, vast canyons, and schools of marine life.

The world in ABZÛ can very naturally capture a player's curiosity and urge them to explore without a single command. If you're a swimmer, you're gonna really, really, really miss the water while playing this game.

ABZÛ is about journeying to the heart of the ocean to discover its secrets and untold stories. It features a dynamic underwater environment filled with color, life, and plenty of contrasts that keep players captivated. Freely swimming around among fish can feel like flying, and there are even areas where you can sit the character down to meditate. The game will then go into a 'spectate mode' that focuses on the fish and areas around you.

You can dive into ABZÛ on all major consoles and the PC in storefronts listed on its website.

'That game definitely sounds like it involves chores,' you might be saying. All right, in this case, I'll concede that's somewhat true. House Flipper puts players through a lot of gameplay that involves handiwork, maintenance, demolition, and assembly to turn a junked house into a market-worthy piece of real estate.

But that's exactly what gets you drawn into the game; it's made up of little tasks that demand your focus and get you thinking about furniture arrangement instead of weird real-life things that are more brain-draining than stimulating.

Plus, there's science that suggests cleaning can reduce some anxiety.

Many user reviews on Steam have expressed pleasant surprise over how engrossing the game can be. In fact, people want more things to do, including one review asking for IKEA furniture. One reviewer called House Flipper "overwhelmingly therapeutic" and said it "changed my outlook on cleaning."

"Day after I bought [the game]," the user wrote, "I tackled my room. Piece by piece. I broke it down into a flow chart and did it piece by piece like I did in game. Now my bed is made and my closet has space. 10/10 the feeling of achievement translated into the real world."

You can find House Flipper on PS4, Xbox, and PC (Steam).

Despite the cartoon-y graphics, once I started playing Untitled Goose Game, I was no longer me. I was a goose.

My thoughts went from "I'm a person playing a game" to "Screw you, I'm a goose" within five minutes. Man trying to shoo you away? Flap the wings threateningly and honk. Kid looks scared of you? Chase him while honking repeatedly. Woman threatening you with a broom? GOOSE BITE.

After immersing myself in the goose world, I feel like I understand why these bastards feel so powerful. It's because they are.

Untitled Goose Game is available for all major consoles (listed on the game's homepage) and PC (Epic Games Store).

Alto's Odyssey is a little escape from the real world in your pocket. You play as a sandboarder moving swiftly across the desert while exploring the surroundings. It's part of the 'endless runner' genre of mobile games — meaning the character is always moving forward as you tap to jump or perform other commands.

The music is calm and pleasant, and the sound of the sand beneath the character's board makes for comforting ambient noise. It's really easy to get focused on the game, forgetting everything around you, as you try to sandboard further and further across the desert.

Alto's Odyssey also features a 'Zen Mode' that offers a great opportunity to slide around on the desert without the fear of getting a game over. It's an excellent way to relax and burn some time with pleasant music and lovely imagery.

You can download and play Alto's Odyssey for free on the App Store or Google Play.