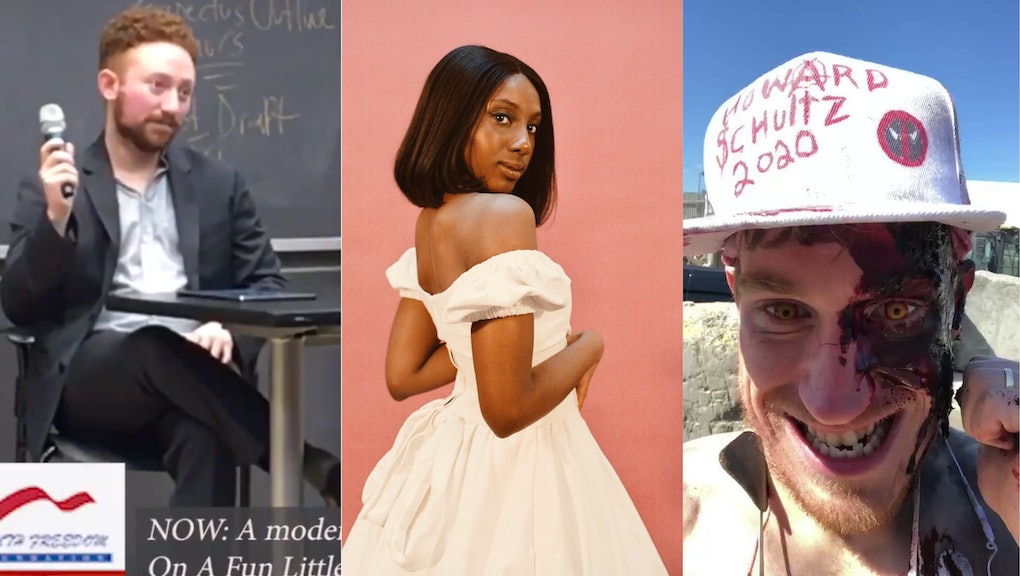 7 political comedians that are making this election almost tolerable

If you remember the immediate aftermath of President Trump’s electoral win in 2016, there was a small chorus of onlookers who were thrilled about the great political comedy headed our way. At least in the mainstream, this didn’t happen. Still the nexus of sketch comedy, Saturday Night Live has flailed through bland recreations of news developments that failed to match their source material in absurdity. Comedians known for barking at New Yorkers and quizzing them on pop culture tedium turned into joyless scolds online. So many brains were broken in the process.

Much has already been written about the challenge of cracking political comedy under Trump and this tricky spot in which late show hosts and writers find themselves. They face an incensed viewership, that wants to know these hosts share their values without tapping into snark. But there’s a growing crop of young comics pursuing stranger territory — often following a blueprint outlined by Sacha Baron Cohen and Tim Heidecker, who are still going strong in their own lanes this decade. It’s possible to create political comedy that’s strongly ideological beyond just noticing the president is bad, that moves a few steps past mere portrayal or parody. Here are some of the very best rising comics doing it.

No comedian has captured the sheer mania of this year quite like Conner O’Malley. A former writer for Late Night with Seth Meyers, O’Malley sprints away from the networks’ milquetoast political barbs at every turn. Instead of Cheeto Man Bad histrionics, he’s captured the pulse of capitalism as religion and devil-may-care masculinity. O’Malley’s star rose through his nameless and increasingly bloodied Howard Schultz fanatic last year, which was a brilliant ravaging of political stan culture and a compelling serialized comedy story. With cultural flashpoints oscillating between 2004 bro hallmarks and the distinctly modern — “Thanos so big horses dogs to him” and “Happy pride, from Amazon!” occupy a large space in my mind — he’s one of the few comics to truly nail mass media consumption in this way. This year, it escalated further with the brilliant “SMOKING 500 CIGARETTES FOR 5G” and when he filmed a bike talk show live from Portland protests, with tear gas and brutality unfolding around him. Without question the most consistently fearless, deranged mind working in comedy right now.

As protests against racist police violence surged into the summer, compromised white celebrities turned to a must-watch Instagram Live series for redemption. The setup for Ziwe Fumudoh’s Baited is simple enough: she’ll often tweet at a celebrity or influencer with a problematic streak — say, Caroline Calloway or Alyssa Milano — that they’d be an iconic guest on her show. Once they’re on the stream, Ziwe hits them with any number of simple questions that go off like landmines. (For instance: “How many Black people do you know,” or “Qualitatively, what do you like about Black people?”) It’s as frank and revealing of a conversation about race as you’re likely to see — with the implicit punchline being that nearly any white person would be an iconic guest. Showtime recently ordered a variety show from Ziwe, so she’ll have even more room to wade into discomfort.

A true package deal for the ages, Jeremy Levick and Rajat Suresh have one of the sweetest things going in comedy. With deadpan irreverence, the pair master the cadence of any number of weird viral moments. Whether it’s a conservative professor DESTROYING brittle SJW students, the Shane Gillis racist podcast video, maskless cafe confrontations — but replacing the substance with something even more absurd and banal — Levick and Suresh handle the dumb culture wars with the gravity they deserve. The pair also work on CBS All Access’ Tooning Out the News, a strikingly good political comedy show that holds power to task better than most network news programs. Levick’s smirking audition to interview the cast of Tag on Good Morning America and the pair’s sendup of private equity newsrooms are strong deep cuts to watch after you’re well-versed in their most viral offerings.

There are so many Trump impressions — on the late night circuit, TikTok, and sketch comedy series — and yet so few of them capture the man’s essence without feeling didactic or trivializing the threat. The very best one of these, by actor and comic James Austin Johnson, went properly viral earlier this month. In these videos, he captures a few crucial points: the Trump cadence is objectively funny when applied to loose pop culture references, he has no idea what he’s talking about at any given point, and an incredibly clogged up throat. He described the tone best in a recent interview with Discourse Blog:

“He has a lot of shit in his throat. So it was about boosting sort of the distortion in my throat and cranking up the, um, ambient kind of gross throat noise. There’s like a hissy breathy croak in his throat. Also he has just totally blown out the top half of his head, like kind of his entire upper respiratory system with cocaine and crushed up the British Sudafed and everything all the time and, uh, screaming at 21-year-olds to take off their clothes and everything he does all day. So he’s sort of trashed his nose and his throat. So I try to close off certain nasal passages.”

Whether he’s extolling the career of “Weird Al” Yankovich or riffing on the number of gecs his administration has to offer, Johnson grasps that you can’t really beat Trump at his own game.

The front-facing comedy video genre can lead to diminishing returns if not outright horrors, but Kylie Brakeman’s send-ups of toothless neoliberalism are truly inspired. Cycling through any number of centrist lib cliches — if Biden wins, I’ll be back at brunch! THAT’s the tweet! — Brakeman captures their suppressed scoldy intensity. As she devolves further and further into insanity, her eyes widen and the mimosas multiply. Your mileage may vary, but it’s extremely good stuff that channels the energy of a dozen comfortable liberals screaming VOTE into the void at each other.

Somewhere in that position between rising talent and household name, Jaboukie is fearless in his efforts to repeatedly nuke his Twitter account. Facing multiple suspensions and righteous unverification after posing as the president, Mayor Bill de Blasio, CNN, the Cats Twitter account, and more, Jaboukie set the standard for political parody with stakes and an actual point-of-view. Many others — including at least one other comic mentioned above — have followed in his footsteps to get a high-profile Twitter break. The one Daily Show correspondent who unequivocally deserves his own show, Jaboukie embodies this rising crop of ideological, leftist comics who are increasingly close to puncturing mainstream comedy institutions.

More like this
“A.I. is actually the fastest path to communism,” and other thoughts from Grimes that make no sense
By Rafi Schwartz
Facebook might let Trump back just in time for the 2024 election
By Rafi Schwartz
TikTok's favorite beekeeper is getting dragged for "faking" it
By Kyle Turner
Stay up to date