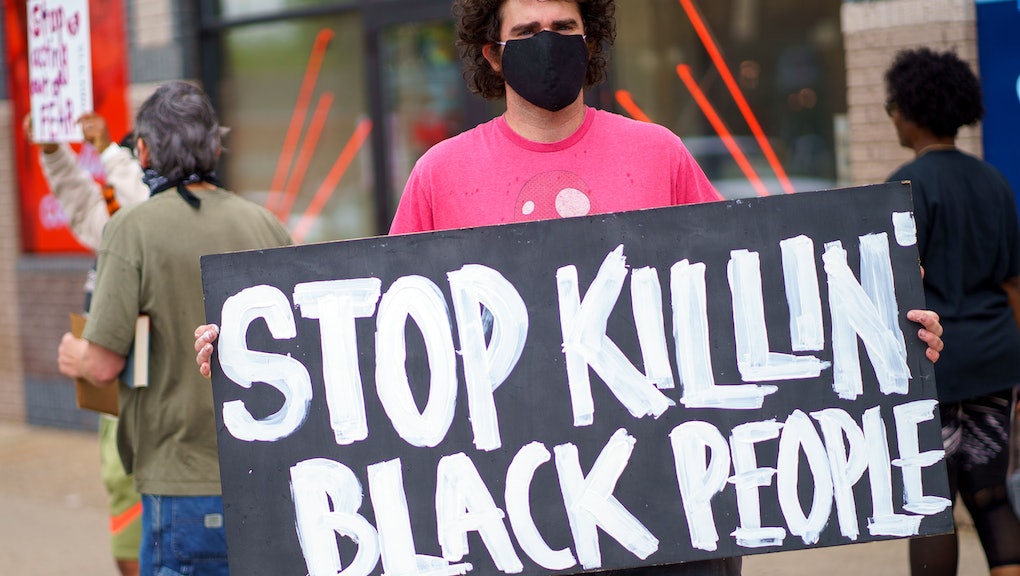 A video of a white police officer digging his knee into the neck of a Black man in Minneapolis, apparently suffocating him, circulated on social media Tuesday morning. The FBI is investigating the death in conjunction with the Minnesota Bureau of Criminal Apprehension for possible civil rights violations. In the video, the man can be heard saying "I cannot breathe" several times while the officer's knee is on his neck before he appears to fall unconscious.

The man was identified as George Floyd, per civil rights attorney Ben Crump, who said he was hired by Floyd's family. Minneapolis Police Department says that two officers were responding to a "forgery in progress" on Monday evening. The officers approached Floyd, who was sitting in his car, and asked him to get out. The department said that Floyd "physically resisted" the officers before they placed him in handcuffs. The officers eventually called an ambulance for him, and he was transported to the Hennepin County Medical Center, police said.

According to local station KARE, the two responding officers have been placed on paid leave for the duration of the investigation. Mic reached out to the Minneapolis Police Department for comment on this story but did not receive an immediate response.

The police department does not acknowledge what can be seen in the video, which is that one of the arresting officers kneeled on Floyd's neck for several minutes until he apparently stopped breathing. The bystander who filmed the video, Darnella Frazier, said in a separate clip she posted to Facebook that “the cops, they was pinning him down by his neck and he was crying. They wasn’t trying to take him serious.”

Local and national leaders are seeking responses as to why an unarmed Black man died in police custody. "Being Black in America should not be a death sentence," Minneapolis Mayor Jacob Frey (D) said. "For five minutes, we watched a white officer press his knee into a Black man's neck. Five minutes."

Nekima Levy-Armstrong, a civil rights lawyer in Minneapolis, said that the killing is "Eric Garner Part 2," referring to the 2014 police killing of a Black man in Staten Island. Garner was put in a chokehold by a white officer for selling untaxed cigarettes on the sidewalk. Video of the incident was widely circulated on social media; in it, Garner could be heard saying "I can't breathe" repeatedly. The phrase has since become a rallying cry for Black Lives Matter and a reference to the brutality that Black people face in America on a daily basis.

Minnesota Sen. Amy Klobuchar (D), a former Hennepin County prosecutor and former candidate for the Democratic presidential nomination, called for a "thorough outside investigation" into the incident. She also said in a tweet that "those involved in the incident must be held accountable."

For many, the killing is a reminder that Black men are often seen by white police officers as suspect or as inherently violent, even if they are not exhibiting violent behavior. Per footage from Monday's incident, Floyd was handcuffed and lying face-down on the sidewalk while the police officer continued to kneel on his neck; several bystanders can be heard pointing out eventually that "he's not even moving" when the man appeared to fall unconscious and the officer still didn't move.

The Democratic mayor of nearby Saint Paul, Melvin Carter, said in a tweet, "The video of a Minneapolis police officer killing a defenseless, handcuffed man is one of the most vile and heartbreaking images I’ve ever seen." Carter is his city's first-ever Black mayor.

This police killing comes just weeks after video footage surfaced of the "modern day lynching" of Black 25-year-old Ahmaud Arbery by two white men in Georgia, who say they intended to make a "citizen's arrest" because they believed Arbery to be responsible for a string of burglaries. Arbery was jogging through a suburban neighborhood in February when he was shot and killed by the two men. The video footage was not released until two months after Arbery's killing and provoked a national outcry, leading to the arrest of the two men responsible for his death — who had not been charged until the footage surfaced. Crump is also working with Arbery's family.

A number of racial justice organizations have planned a protest for Tuesday evening, which will take place in the same location as the man's killing. An event posting of the protest says that protesters will gather to demand justice for the "victim and his family," as well as that the police department release the names of the officers involved and additionally fire them and criminally charge them for the incident.

On Tuesday afternoon, Frey announced that "four responding MPD officers" have been fired in relation to Floyd's death. "This is the right call," the mayor wrote.