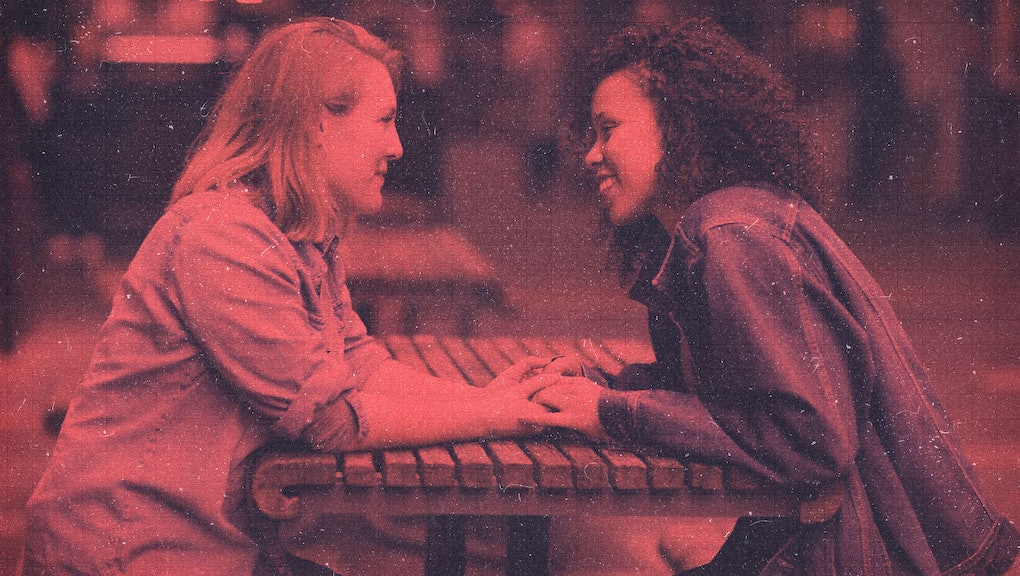 A dating app for queer women exists — so why is no one using it?

When the gay hookup app Grindr launched in 2009, it sparked something of a revolution. Although dating sites had been around since the mid-'90s, Grindr was the first major, GPS-using app aimed at queer men. Following its debut, several similar apps, such as Scruff, Jack’d, and Chappy, arose. Yet while heterosexual people and gay men now have a plethora of apps to choose from, one demographic has been largely left in the cold. It's 2019, and there's still no truly successful, widely-used dating app for queer women.

To be fair, all the major online dating platforms do have the option of listing yourself as a woman who’s interested in women. On Tinder and OkCupid, users are even given numerous ways to describe their sexual orientation and gender identity; this feature provides support and visibility for queer women and non-binary folk whose identities aren't simply "woman seeking woman." But finding accommodation on an app that’s primarily geared towards straight people is different than having an app specifically geared toward the needs and desires of queer women.

It’s not that no one’s ever tried to make one. In the early days of dating apps, there was a rush of interest in creating a “lesbian Grindr" — apps like Sizzr and FindHer quickly hit the scene, but neither of them ever got off the ground. Only one app found some success: Dattch (now known as HER), which launched in 2013. Originally, HER was mostly a way to get users laid in a timely fashion, but over the last few years, it's become a more community-focused platform in which queer women form friendships while also browsing dating profiles. Today, the app boasts 4 million users in 113 countries, and while that number pales in comparison to Tinder, which has over 50 million users, or even Scruff, which hit 10 million users in 2016, it’s certainly impressive.

But despite HER's popularity, most of the queer women I spoke to for this piece hadn't even heard of it. “I didn't know [queer woman-focused] apps existed,” said N’jaila, a 30-year-old from New Jersey. “When you look in the Google Play store and put in 'lesbian,' nothing comes up.”

Robyn Exton, the founder of HER, told me that money — or, rather, the lack thereof — is the primary roadblock in increasing the app's growth and recognition. She said that a queer-founded business is never going to have the same funding as other apps because many investors don’t see queer women as a profitable demographic, despite women’s proven spending power. Although HER raised several million dollars in funding in its first few years, the app has always been an indie shop — a bootstrapped entity run on a minimal budget — and that has dramatically impacted both the app's functionality.

Ivy, a 35-year-old lesbian from Austin, TX, told me that she was deterred from joining HER after reading bad reviews from dissatisfied users. Other women complained about the app's confusing pricing structures, buggy interfaces, or barebones options. “Looking for potential partners on the sole basis of a few pictures didn't feel right to me,” said Jill, a 27-year-old living in France, who wished HER’s profiles offered more space for users to describe themselves.

When your company's size is a fraction of that of other apps, it’s hard to compete on features. “We have a team of five engineers. I’m sure Tinder and Bumble have like, five hundred," said Exton.

And then there's the issue of reach. Even in their early days, said Exton, Tinder and Bumble had the support of major backers, and thus had large budgets for product development, marketing, and advertising. Today, these companies' massive ad campaigns on city billboards and subways ensure that pretty much everyone knows about their existence.

HER doesn't have the same kind of financial backing, though, so it's challenging for the team to compete with its peers. And few users lead to few matches; some of the women I hear from — particularly ones from small towns where potential partners are few and far between — told me that they worry a queer-focused app just won’t have enough users to be worth their while.

But even queer women aware of HER aren't necessarily rushing to sign up, instead relying on platforms like Tinder or Bumble for their online dating. Part of this hesitation is, ironically, due to HER's main selling point — that it's designed for queer women. Queer women who also date men are possibly less likely to sign up for an app that dramatically reduces their dating pool.

As our understanding of gender and sexuality becomes more complex, some people believe there will no longer be a need for an app that targets an exclusive community. Many queer women see trans men and non-binary folk as part of their community and dating pool, yet people with those identities might not feel comfortable joining an app like HER with female-focused branding. The same goes for users of Grindr and other apps focused on particular groups, judging by recent backlash these apps have faced. “My [trans and non-binary friends] struggle similarly with dating and meeting people, and we certainly don't need an app for every specific type of queer person,” said Lindsey, a 22-year-old woman from Virginia who identifies as gay.

Exton knows that marketing the app toward women who sleep with women exclusively could backfire, so her team strives to be more inclusive by advertising its users as “lesbian, bisexual, and queer people" and referring to them as "queer womxn" on the website. Still, when you combine the limitations of small, grassroots tech companies with the difficulties of parsing who, exactly, a queer women’s app is meant for, it's understandable why some people would prefer to use a general interest dating app instead. And as those platforms increasingly attempt to adapt to meet the needs of their queer users, even more women might get on board.

“On principle, the idea of an app that's made for and by queer women does appeal to me,” said Jill.

Yet so far, the challenges of creating that app — and getting a critical mass of queer women to use it — have proven far more difficult than anyone could have expected.