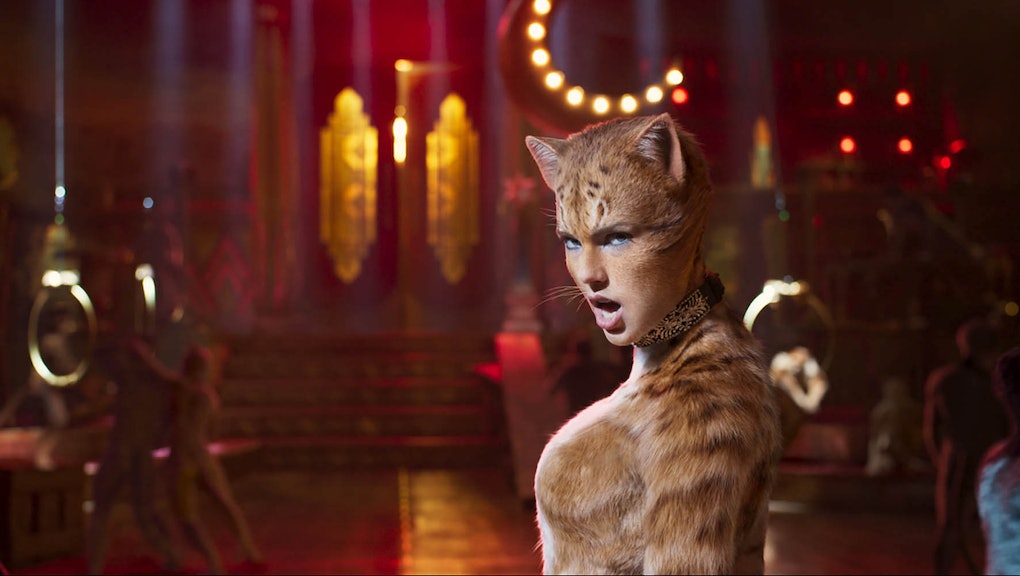 A delirious public demands the "butthole cut" of 'Cats'

On Tuesday, Universal delivered a vital quarantine airdrop with the VOD release of Cats. There are few movies that have managed to match the surrealism and grotesque panic of their particular moment. And now we can all watch from our homes, amidst the throes of a global pandemic. A strange but necessary form of escapism. You just have to ignore that one of the movie's main characters, an exuberant cat named Macavity, is played by Idris Elba, who recently tested positive for COVID-19.

The internet collectively decided to share their experience watching the film live on Twitter. Seth Rogen got really high and live-tweeted his first viewing, calling attention to the psychedelic scaling of sets and cat bodies. The screenwriter Ben Mekler called for a necessary companion piece: a tell-all book about the making of Cats. He got a major breadcrumb in the replies, from someone who knew a VFX producer that worked on the movie. As he tells it, the friend’s “entire job was to remove CGI buttholes that had been inserted a few months before. Which means that, somewhere out there, there exists a butthole cut of Cats.”

As sometimes happens, Two and a Half Men’s Jon Cryer got involed, demanding the unvarnished release.

After James Corden and Rebel Wilson made a mockery of the film’s disturbing effects at the Oscars, the VFX Society understandably took issue with pinning the blame on the team of hundreds of artists and animators who worked under significant crunch. The root of its disaster extends far beyond just the cats and their smooth, mid-stage Animorph bodies, considering Tom Hooper was in the booth finishing up Cats the day before its premiere. That said, the Butthole Cut combined with the Human Hands Cut would be the best way to salvage their efforts.

In retrospect, making Cats the first movie I saw in theaters this year — and possibly one of the last — should have been a sign that we were wading into some dark, unprecedented territory. Even before the pandemic hit stateside, it had become a part of the household lexicon (like when Corden quite earnestly said in a behind-the-scenes video: “these are people, but they’re cats, and this is kind of blowing my mind.” Sometimes the “Mr. Mistoffelees” chorus just spills out of me as an involuntary coping mechanism. Anyway, if you need the Cats fix now, it’s available to purchase for $19.99 on digital. But if you hold out a few more weeks until April 7, you can either rent or purchase it on Blu-ray.

More like this
The long-awaited 'Zola' movie looks so, so good
By Kara Weisenstein
RAINN and ‘Promising Young Woman’ are confronting sexual assault on college campuses
By Kara Weisenstein
'Exterminate All the Brutes' is a messy, ambitious documentary that ties together genocide, white supremacy, colonialism ... and Josh Hartnett?
By Nicholas Russell
Stay up to date