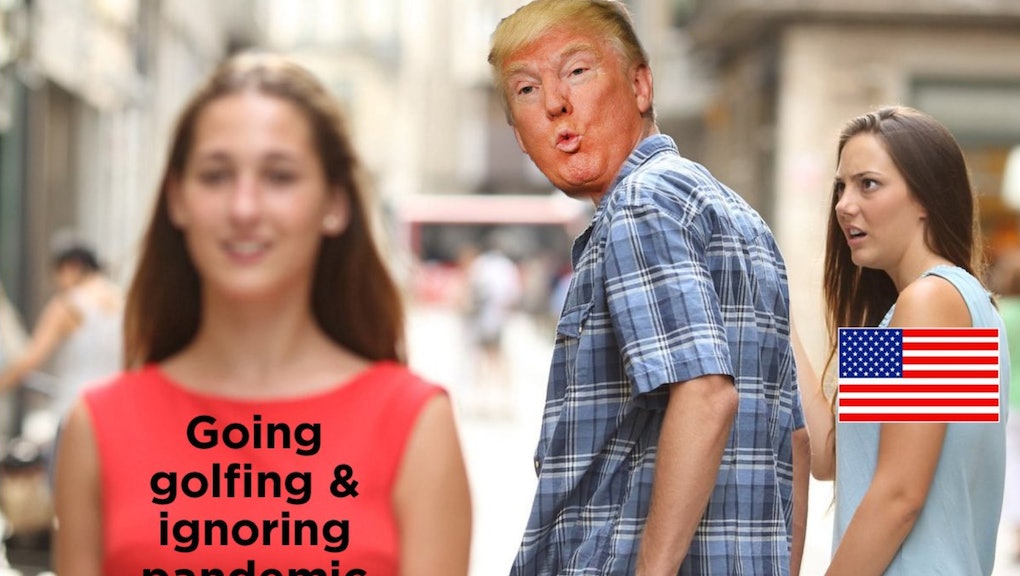 When Hillary Clinton urged voters to "Pokémon Go to the polls" during the 2016 presidential election, she and her team presumably thought it was a "hip" and "cool" way to tap into the youth voter zeitgeist, and not a deeply awkward grasp at cultural relevancy that would still be a punch line for her entire campaign years later.

I dredge this cursed campaign memory back up from the murky depths where it belongs because apparently, some people within the Democratic Party establishment are eager to recreate that same deeply uncomfortable energy as we head into the 2020 presidential race.

Democratic super PAC American Bridge announced this week a six-figure ad-buy in Michigan, Pennsylvania, and Wisconsin — perhaps the three most important battleground states in the upcoming election. Their brilliant strategy is to use memes that focus on President Trump's catastrophic coronavirus pandemic response.

Yes, memes. And yes, they're as bad as you'd expect.

"Using a little bit of humor, even though this is a dire time, can be very effective,” American Bridge President Bradley Beychok told HuffPost about the campaign.

Unfortunately, American Bridge isn't alone in its absolute air-ball of an anti-Trump meme campaign. Here's a few others, thanks to We Are PA, a self-described "part of the Story of US online community" which shares local news stories with a decidedly progressive bent.

While the Story of US homepage doesn't list its financial backers, it evidently has enough money to run these deeply cringe ads on Facebook. Mic reached out to the group for more information on its mission, funders, and the ads themselves, and will update this story if they respond.

The sticker appears to be pantomiming a clever play on Joe Biden's name, given that the former vice president is now the presumptive Democratic presidential nominee to face Trump (first name Donald — get it??) in the fall. Is intentionally misspelling the candidate's name so that a casual observer might read "By E Don" a shrewd political move? Who's to say!

There is in all this an underlying theme of uncomfortable boomer desperation at the expense of, well, quality. It's hard to imagine a single millennial or zoomer being even mildly amused — let alone won over —by a bunch of antiquated meme formats in the service of replacing one septuagenarian with another. It's "Pokémon Go to the polls" all over again, only this time we've already seen where that leads us.

Please, I beg of you, Democratic party insiders and lavish campaign spenders: Save your $100,000 and just pay a high school junior to make your memes instead. I promise you, whether you understand it or not, it'll be better than anything you've got so far.