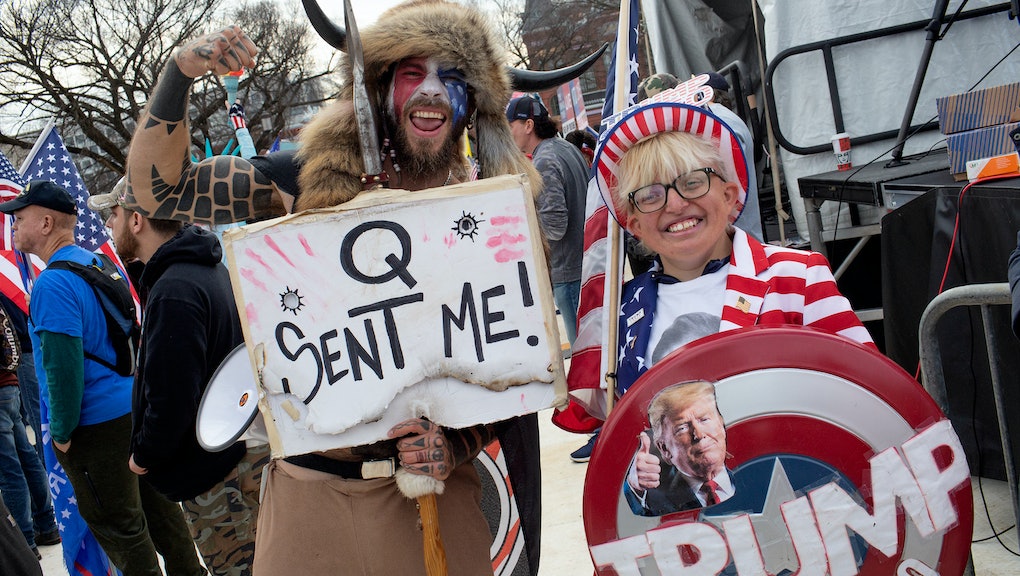 A full 15% of Americans believe in QAnon's core conspiracy. Hooray!

QAnon, the wildly adaptable, thoroughly debunked internet-spawned "conspiracy theory" — an admittedly imperfect term for something much more deliberate and dangerous — may seem to many like a fringe movement content to metastasize in Facebook mom groups and disparate seedy digital forums. It's comforting to relegate that nebulous goulash of partisan ultra-nationalism, satanic panic, antisemitism, and whatever other unhinged delusion to quarantined zones safely removed from most of our everyday lives.

But, as it turns out, QAnon's saturation into the zeitgeist is much deeper and more intense than previously understood. To dismiss it as a peripheral fluke is to deny how prevalent its core tenets have become in American politics, culture, and religion. Because according to a just-released poll from the Public Religion Research Institute (PRRI), a shockingly large percentage of the country believes in at least one of QAnon's three foundational precepts.

Asked whether "the government, media, and financial worlds in the U.S. are controlled by a group of Satan-worshipping pedophiles who run a global child sex trafficking operation," a whopping 15% of Americans agreed. That number leapt to 23% among Republican respondents only. Just 8% of Democrats — a low, but non-trivial amount — also ascribed to the notion of satanic cannibalism.

Perhaps even more alarming is the 28% of Republicans, and 15% of Americans overall, who agreed that "because things have gotten so far off track, true American patriots may have to resort to violence in order to save our country." Here, just 7% of Democratic respondents signed on, though twice that number agreed "there is a storm coming soon that will sweep away the elites in power and restore the rightful leaders." As in the case of the other two foundational QAnon beliefs, Republicans were significantly more likely (28%) to agree with that statement. Overall, 20% of respondents agreed there's a pending storm.

PRRI's survey, conducted among 5,149 respondents from March 8-30, also determined that "about one in five white evangelical protestants (22%), Hispanic protestants (21%), and Mormons (21%) are QAnon believers." Conversely, non-religious and Jewish Americans are dramatically less likely to believe in the various QAnon precepts.

While the majority of the country is still firmly rooted in the real world, the not-insignificant portion of the nation that does adhere to at least one QAnon belief only further highlights the concern raised late last year by Ipsos pollster Chris Jackson, who argued that the rise of QAnon may have fractured Americans' ability to agree on a "baseline reality." Seems bad!