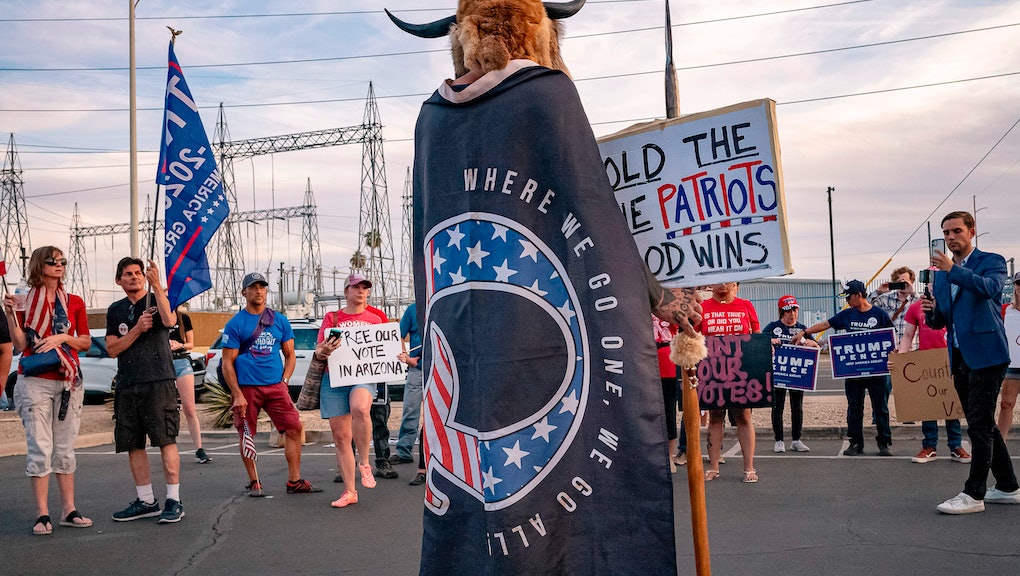 Americans may no longer agree on a "baseline reality" thanks to QAnon, a new poll says

With 2020 drawing to a much-needed close, you might think we're in the clear for 2021 — new year, new beginning, right? A clean slate to start fresh. Unfortunately, it seems as if it will be a long time before we escape the horrors of 2020, which are poised to haunt us well into the new year and beyond.

According to a new poll from NPR and Ipsos, some of the worst parts of the past year have embedded themselves in the national psyche to such a degree that it's hard to imagine ridding ourselves of their deleterious influence anytime soon. For instance, take QAnon — that mercurial nexus of differing conspiracy theory vectors which at its core posits that there exists a baby-eating satanist cult within America's uppermost echelons of power.

Per the study's top sheet, regarding the 1,115 adult respondents who participated in the Dec. 21-22 poll:

Fewer than half (47%) are able to correctly identify that this statement is false: “A group of Satan-worshipping elites who run a child sex ring are trying to control our politics and media.” Thirty-seven percent are unsure whether this theory backed by QAnon is true or false, and 17% believe it to be true.

Put another way: The next time you find yourself in a group of 10 strangers at, say, a restaurant or movie theater or ballgame (assuming we're ever able to gather in groups again), at least one of them is likely to believe in a cult of devilish baby eaters. Another four are open to the possibility.

"What this poll really illustrates to me is how willing people are to believe things that are ludicrous because it fits in with a worldview that they want to believe," Ipsos pollster Chris Jackson told NPR, adding that the polling results seem to bode ill for any hopes of returning to a "baseline reality" upon which we can all agree.

Among the poll's other startling findings was the fact that only 38% of respondents were able to correctly describe the vast majority of the past year's widespread social justice protests as having been non-violent, and a plurality (40%) of respondents believed without evidence that COVID-19 was developed in a Chinese lab.

Given the saturation of QAnon into the American mainstream — to say nothing of the fact that there are now multiple adherents in Congress, as well as who knows how many in state and municipal positions — it seems safe to assume that the misinformation and conspiracy-mongering that helped define 2020 as one of the worst years in recent memory aren't going to disappear anytime soon.