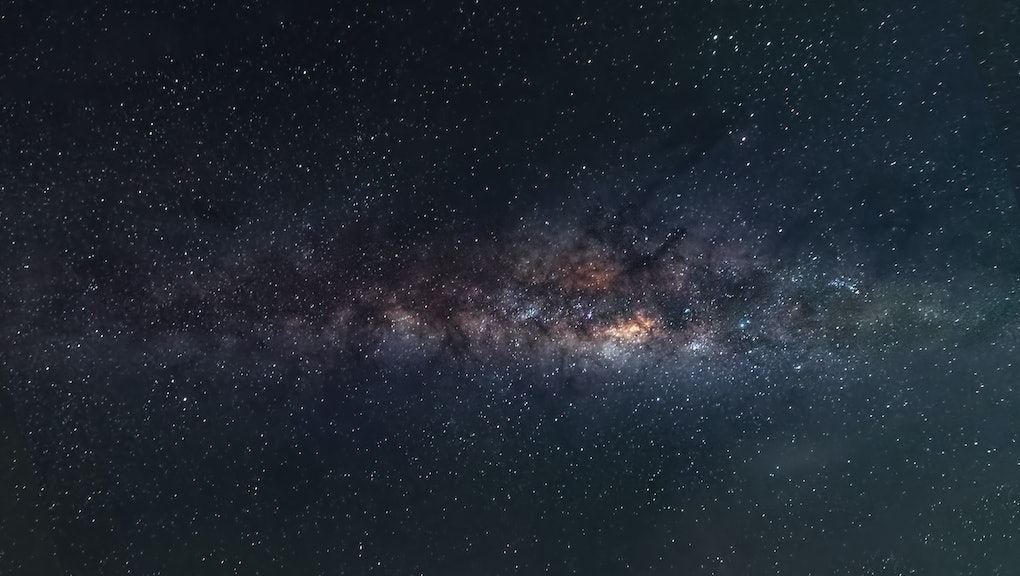 A team of astronomers has discovered a massive wall of galaxies resting behind us, but we haven't been able to see it because our own galaxy, the Milky Way, is in the way. In a study led by Daniel Pomarède of the University of Paris-Saclay, published in The Astrophysical Journal last week, the researchers reported on their efforts to map our galaxy and its surroundings by compiling data and calculating distances using findings from telescopes all over the world. As they generated 2D and 3D maps of the area around us, they discovered a ridiculously lengthy cluster of galaxies that they have dubbed the South Pole Wall.

Even though it's right behind us, we haven't been able to see the South Pole Wall because of the Milky Way's dense gases and interstellar dust blocking our view. This area, called the ominous Zone of Avoidance, is difficult to see through without an infrared telescope to reveal the stars obscured by the Zone. But astronomers and cosmologists believe there's some amazing sights out there beyond it.

The South Pole Wall is absolutely enormous — about 1.4 billion light-years long. Its size rivals that of another curtain-like wall of galaxies called the Sloan Great Wall. And there's a chance it could be even bigger, said co-author R. Brent Tully of the University of Hawai'i in a university news release.

"We wonder if the South Pole Wall is much bigger than what we see," Tully added, noting that the wall extends across the entire surveyed area, indicating that it could stretch further as scientists continue to expand the map of what we know. "We are early explorers of the cosmos, extending our maps into unknown territory."

Pomarède’s team created a 3D map to visualize the Milky Way's surroundings, labeling key locations, the South Pole Wall, and our small galaxy at the center of it all.

In the visuals provided by the researchers, we can clearly see the South Pole Wall curving around the Milky Way galaxy like an arm. One might think it looks fairly close by on the map; well, that's because kinda is.

"The surprise for us is that this structure is as big as the Sloan Great Wall and twice as close, and remained unnoticed, being hidden in an obscured sector of the southern sky," Pomarède told The New York Times.

The researchers credit mapping technology and imagery for their find. "The discovery is a wonderful poster child for the power of visualizations in research," said Tully.

The maps also help casual space enthusiasts learn about the messiness of space. It's spectacular to see that, rather than galaxies being evenly spaced out amongst the darkness, it's actually full of clusters of dust and unknown matter — theorized to be dark matter — in between galaxies globbed together by gravitational pulls. The discovery of the South Pole Wall places it on a list of other distinguishing landmarks (spacemarks?) that includes superclusters like the BOSS Great Wall and vast swathes of emptiness like the Boötes Void.

More like this
Space debris from a rocket launch is currently hurtling toward Earth
By AJ Dellinger
Eating meat is killing people, but not in the way you think
By AJ Dellinger
Brood X is here, but I'm okay with it actually
By Rafi Schwartz
Stay up to date