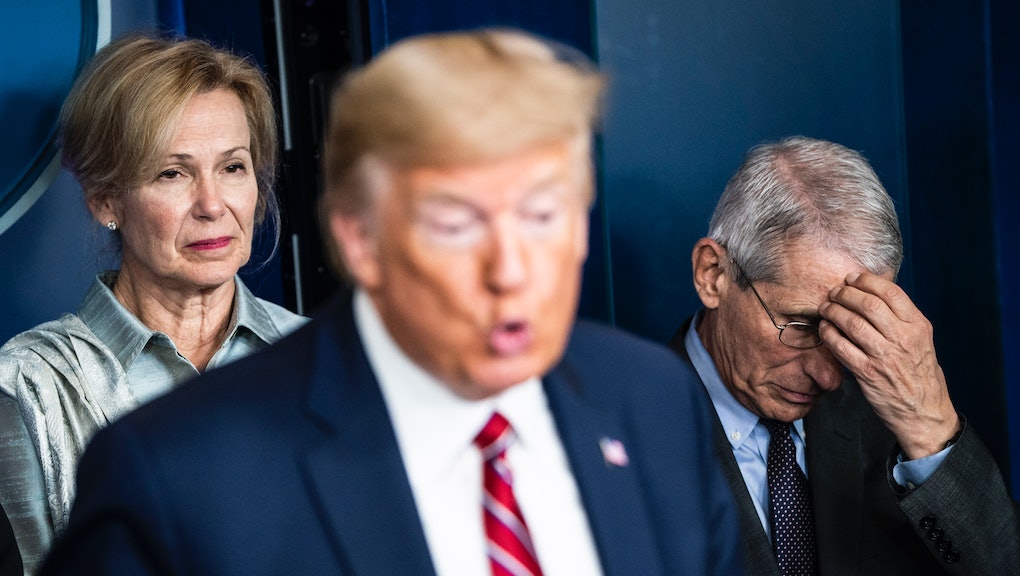 A leaked White House memo says the U.S. is entering the "most deadly phase of this pandemic"

The White House has faced tons of outside scrutiny about its mishandling of the coronavirus pandemic, but it has often seemed like no one on the inside was willing to be openly critical. However, on Monday, a memo was leaked from within the White House in which Deborah Birx, who heads Trump’s coronavirus response team, issued a harsh rebuke and some eye-opening predictions for where the pandemic is headed.

Trump has repeatedly said that the nation is “rounding the corner" on cornavirus, but according to Birx, we’re actually just walking the block, and the next corner is scarier than the last. That we may be standing on the threshold of four more years of Trump’s pandemic denial makes Birx’s message all the more unsettling.

“We are entering the most concerning and most deadly phase of this pandemic,” she wrote in the memo, which was leaked to The Washington Post. “This is not about lockdowns — it hasn’t been about lockdowns since March or April. It’s about an aggressive balanced approach that is not being implemented,” Birx said.

Birx’s criticism is in line with what other health experts have been trying to tell us for some time: The White House is not doing enough, or the right things, to protect the lives of Americans, and the consequences could be dire. World Health Organization chief Tedros Adhanom Ghebreyesus warned in June that the worst of the pandemic was yet to come, and the massive surges we’ve seen since confirm that what once may have seemed like nihilistic forecasting was, in fact, extremely realistic.

To sum up: We are currently facing the highest numbers of coronavirus infection that this country has seen so far, and the person heading the White House’s coronavirus response team is telling us that it’s going to get worse. Sure, Birx has been criticized for her seeming silence in the past, but she’s speaking up now, in a moment in which she faces more potential retaliation than ever. This leaked memo feels, to me, like a warning that it’s time for us all to get more curious about what public health experts think we should do next and stop waiting for the government to fix COVID.

Those who disagree with Trump’s tactics — particularly public health experts like Birx and Fauci — have often been berated or found their jobs in jeopardy. Birx was already the target of one of Trump’s bullying tweetstorms back in August, and it would be a wonder if she gets out of the White House unscathed this time. Squelching dissent through threats and bullying is a classic Trump move, and I might add, a strategy to make it seem like everyone agrees, pulled right from the fascist playbook.

More like this
Studies suggest that Pfizer is no longer the cooler vaccine
By Ian Kumamoto
Could fresh air be the key to ending the pandemic?
By Melissa Pandika
Vaccines are good. Threatening to evict someone over them is not
By Rafi Schwartz
Stay up to date