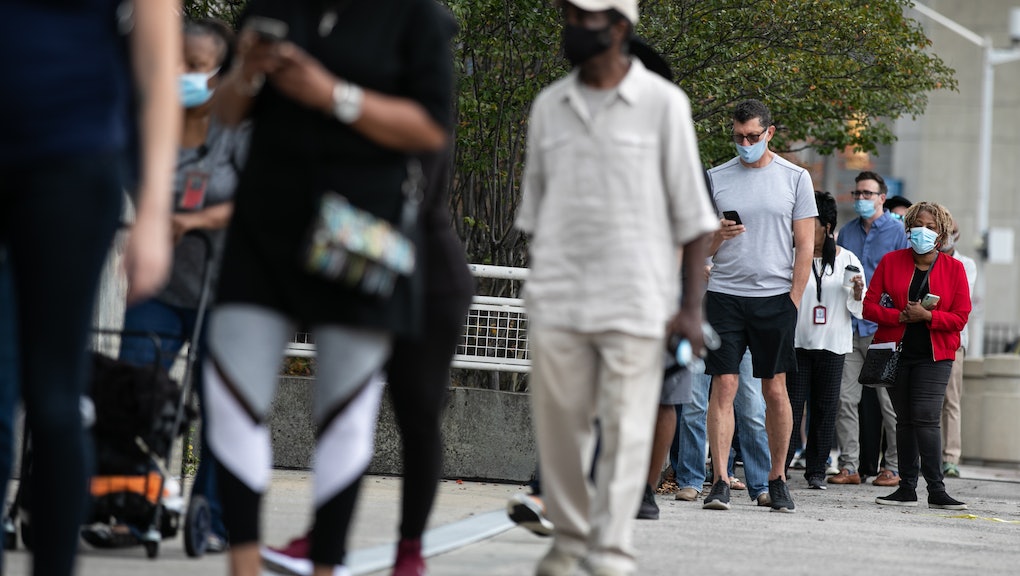 A massive amount of people are voting early

After months of speculation about how the general election will play out, with election officials scrambling to secure the U.S. Postal Service, establish early voting sites, and mail out millions of absentee ballots, turnout for the 2020 election is breaking records.

According to the U.S. Elections Project, nearly 29 million Americans have cast their ballot either by in-person early voting or voting by mail. That's about a fifth of the total ballots cast in 2016. It's hard to say exactly what the numbers mean given that we'll still have to wait until Nov. 3 for preliminary election result — and possibly longer for an official winner — and of course, plenty can happen in the two weeks leading up to that Tuesday.

Still, even if we can't make assumptions from the numbers, the fact that so many people have voted is notable in itself. Voter turnout has been spiking in swing states where Democratic operations have expanded their efforts to engage voters who they believe will be responsible for pushing progressive candidates over the finish line. In states like Texas, Georgia, and North Carolina, voter turnout so far is eclipsing 2016 early voting numbers, and each of these states has a competitive, potentially flippable seat: In Texas, Republican Sen. John Cornyn is distancing himself from President Trump as Democratic Party-backed challenger MJ Hegar gains ground; in Georgia, young voters of color are expected decide the hotly contested special election; and presidential candidate Joe Biden is making a play for North Carolina, a swing state that has proved elusive for Democrats.

What's also notable, aside from the sheer number of people who have turned out so far, is that early voting has ballooned in states where it's more difficult to register to vote and actually cast a ballot. In Texas, a state that saw hours-long lines in this year's primary elections and doesn't offer online voter registration, 4,064,685 ballots have already been counted, per the Elections Project — a total that equals 45% of the ballots in cast in the state for the entire 2016 general election. In North Carolina, which requires witness signatures on a mail-in ballot envelope, thus preventing some ballots from being counted at all, 1.5 million early ballots have been counted so far. For perspective, there are about 7.3 million registered voters in North Carolina. And Georgia, which in 2018 went out of its way to prevent eligible voters from casting their ballots, has also seen more than 1.4 million early ballots cast, with still over a week to go in the state's early voting period.

While we won't know the results of these efforts for a few weeks, the data shows that more Democrats request mail-in ballots, so there's a chance that many of the returned ballots represent votes for Democrats. The other takeaway is that early voting may help prevent against some of the Election Day chaos that's likely to occur. Some states don't allow boards of election to start counting ballots ahead of Nov. 3, but many do, and those states that can get a head start on counting might simplify the process by being able to declare a winner on or very soon after Election Day.

In any event, pundits have been calling this November's presidential election the "the most consequential election of our time" — and given the energy behind early voting, it seems like voters are listening.