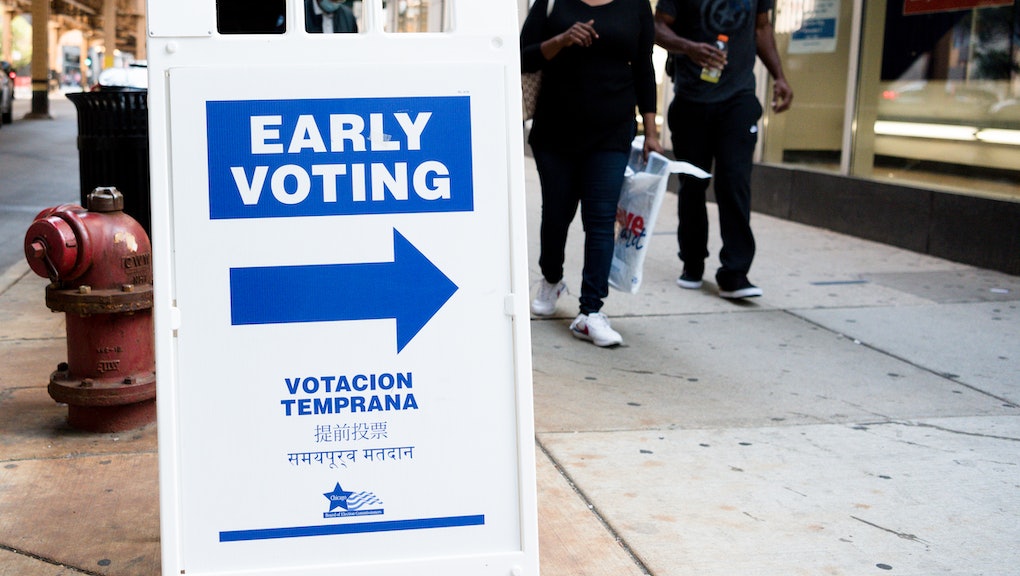 Though early voting has begun for many states across the U.S., last-minute filings to impede voting access have flooded the courts. Even though Republicans are giving it all they’ve got to suppress votes as per usual, their tactics appear to be failing. Voter turnout is breaking records. This presidential election, voters are more prepared. They know this could be the most consequential election of their lives. And they are bringing their lawn chairs and water bottles to wait in lines.

Recently, voting rights advocates have scored major victories. In Pennsylvania, the Trump campaign tried (and failed) to require the presence of guards at ballot drop box sites and to restrict the number of ballot return boxes. Missouri voters won the option to return mail-in ballots in person, not just by mail. And any Arizona voter who forgets to sign their mail-in ballot can do so up to five days after the election.

Unfortunately, in other cases, more conservative judges have imposed additional restrictions on voting. An appeals court in Georgia recently ruled that absentee ballots must be returned by Election Day, as opposed to postmarked by Election Day, a decision that could disenfranchise thousands of voters. Ohio Secretary of State Frank LaRose (R) and Texas Gov. Greg Abbot (R) have succeeded in banning counties in their respective states from having more than one ballot drop box. These bans will impact voters in heavily populated counties without reliable transportation, who will now have to travel farther distances to utilize this option. And in Arizona, despite a lower court’s finding that Black, Indigenous, and Latinx voters were disproportionately burdened, third parties will not be allowed to collect voters’ ballots, nor will ballots cast at the wrong precinct be counted.

The GOP’s primary strategy has changed little over the years when it comes to voter suppression: Throw everything at a wall and see what sticks.

The GOP’s primary strategy has changed little over the years when it comes to voter suppression: Throw everything at a wall and see what sticks. Nothing is too outrageous. Even blue state Republicans have allegedly planted unofficial ballot drop boxes in three California counties.

The key is for voters to stay informed about any changes to election laws and policies in their states. The website for your state's secretary of state's office should have the most updated information.

Long lines to vote present an additional problem. While long lines can indicate high voter enthusiasm, they also signal that secretaries of state and boards of elections refused to properly plan for and accommodate high voter turnout. On the first day of early voting in Georgia, voters experienced a disastrous déjà vu. Some waited five or more hours to cast their votes.

Long wait lines disenfranchise voters. Not everyone can take time off of work, or find adequate child or elder care to stand in an hours-long line waiting to vote. And especially during the COVID-19 pandemic, elderly and immunocompromised voters can’t afford to risk their health by waiting among crowds for half a day to vote. What’s more, we already know that historically, long voting lines disproportionately disenfranchise Black voters.

Though there are still three weeks until Election Day, it appears thus far that the GOP push to make voting as difficult as possible is not working as well as they’d hoped. As of Oct. 11, some 9.3 million votes had been cast. To put this number in perspective, at about this same time in 2016, only 1.4 million ballots had been cast.

Thus far, mail-in votes appear to favor Democrats. In Florida and North Carolina, crucial swing states this election, Democrats are returning mail-in ballots at much higher rates than Republicans. While a vote cast early counts no more than a vote cast on Election Day, the high early turnout of Democratic voters poses a significant issue for Republicans: As one Republican pollster noted to USA Today, the more Democratic voters who return their ballots early, the fewer undecided voters remain for Republicans to try to convert to their side.

Regardless of the long lines and what the courts decide (and when they decide it), voters must adjust their voting plans accordingly. I Will Vote is an excellent source for voter information. If the services are available, some voters can look up the wait times for their polling place. For transportation, voters can contact local organizations that offer free rides for early and Election Day voting. Ride share companies are offering discounted rides to the polls too.

Don’t forget to call the nonpartisan election protection hotline, 1-866-OUR-VOTE, for assistance or to report voting issues. Spanish speakers can call 1-888-VE-Y-VOTA. The number for Arabic speakers is 1-844-YALLA-US; and for Bengali, Cantonese, Hindi, Urdu, Korean, Mandarin, Tagalog, or Vietnamese, the number is 1-888-274-8683.

There are only three weeks left until this election. To vote this year, make a plan, keep your wits about you, and cast your vote as early as you can.

More like this
Texas Democrats are literally leaving the state to protest a GOP-backed voter suppression bill
By Rafi Schwartz
A state-by-state list of racist Confederate monuments that have been removed so far
By Vanessa Taylor
Nancy Pelosi took a stand on the Jan. 6 committee, and it left Republicans whiny as hell
By Rafi Schwartz
Stay up to date