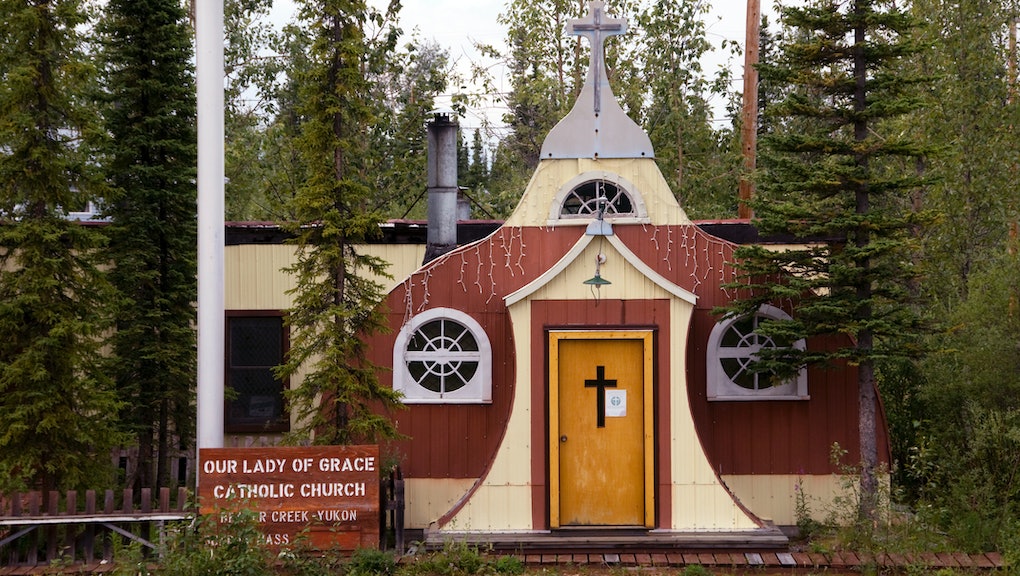 The wealthy elite have access to a lot of things right now that the rest of us don’t — luxe pandemic bunkers, artisanal healthcare, and an endless supply of toilet paper, to name a few. Now some of them are using their privilege in the most heartless way imaginable — by skipping the vaccine line. These two rich Canadians, Rodney and Ekaterina Baker, have been fined after effectively stealing Covid vaccines meant for Indigenous residents. Here’s what we know.

The couple — he's a casino mogul, she’s an actor — reportedly flew in their private chartered jet to a small community near the Alaskan border called Beaver Creek, which is a community that Americans might refer to as a reservation. Basically, it is land that is now governed again by the Indigenous people, the Cree tribe, that it was inhabited by for 10,000 years before it was stolen by white people. The region is currently the home of about 100 White River Nation residents, many of whom are elderly.

A mobile team had been dispatched to Beaver Creek by the Yukon government to administer the Moderna vaccine in Beaver Creek. After flying into the area, the couple told officials that they would be quarantining in nearby Whitehorse, the Guardian reported. But they didn’t go to Whitehorse. Instead, The Bakers allegedly snuck into the vaccination clinic by claiming that they were workers at a local hotel, and by the time local enforcement agents uncovered their scam, they had already gotten the shots and fled back to Vancouver.

So, not only did these rich assholes steal vaccine doses meant for First Nation Elders, they also broke quarantine and effectively put an entire community at risk. I. Cannot. With. This. Entitlement.

“I’m very upset at the individuals — the couple — who did this. What they did was to mislead our officials and the community,” John Streicker, Community Services Minister in Yukon, told Yukon News. The Yukon Government and the leadership of the White River First Nation are outraged by the Baker’s deception. “We are deeply concerned by the actions of individuals who put our Elders and vulnerable people at risk to jump the line for selfish purposes,” Angela Demit, White River First Nations Chief, told Yukon News.

Let me be very clear: The Bakers appear wealthy enough that they certainly could have found any number of ways to buy their way to immunity. They definitely did not need to steal it from Indigenous people. In 2019, Rodney Baker earned more than $10.6 million as CEO and president of the Great Canadian Gaming Corp. Sidenote, this is not Baker’s first scam attempt, as he is also the subject of a separate money laundering probe, according to the Washington Post.

As punishment, the Bakers have paid downright pathetic fines — totaling the equivalent of about $900 each — for violating quarantine guidelines, The Washington Post reported. As a treat, Rodney Baker was forced to resign his $10 million a year job because Great Canadian “has no tolerance for actions that run counter to the company’s objectives and values,” according to the Post. Losing a fancy job is not nothing, but it isn’t exactly justice, either.

Citizens of Beaver Creek, understandably, want more and they’re ready to fight for it. “It’s clear to me that because we are a predominantly Indigenous community, that they assumed we were naive,” Demit told Yukon News. Janet Vander Meer, the head of the White River First Nation’s coronavirus response team, told Canada’s Globalnews that the couple’s actions are “another example of ongoing acts of oppression against Indigenous communities by wealthy individuals that thought they would get away with it,” adding, “that’s got to be jail time.”

More like this
CVS and Walgreens wasted vaccine doses by the thousand when they were most needed
By Tracey Anne Duncan
The push to legalize psychedelics has ignored Indigenous communities
By Suzannah Weiss
Remember the vaping crisis? Well, it hasn't gone anywhere
By Melissa Pandika
Stay up to date