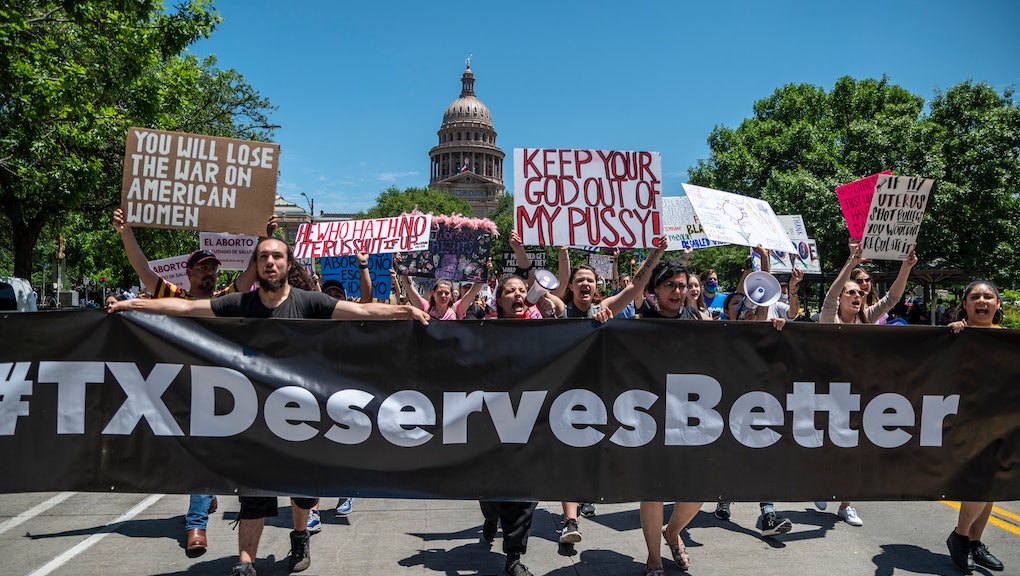 It’s easy to feel fatalistic about the current threats to reproductive rights in this country. But as we as a nation backslide into the middle ages, some good samaritans with a sound sense of humor are finding creative ways to resist. An anti-choice organization in Texas recently set up a site where users can snitch on people they think might be violating the state’s draconian abortion laws. But instead of raking in hot tips, they’re getting memes and tall tales. Here’s everything you need to know about the iconic trolls spamming this anti-abortion whistleblower site.

Last month, an extremely powerful anti-choice group in Texas, Texas Right to Life, launched a website that encourages people to report abortions performed after six weeks, which will be illegal as of September 1st.

Some background on the law: It will allow anyone involved with an abortion performed after six weeks to be prosecuted. In other words, under this new Texas law, you don’t even need to have an abortion to incur fines that start at $10,000 — citizens can be charged for playing any kind of role in the procedure or, in fact, for simply knowing about it, according to VICE.

In addition, the law essentially deputizes citizens to report on each other, so basically anyone can create an investigation and sue basically anyone. What could possibly go wrong?

Like anything that happens on the internet, no one is exactly sure who started the ingenious spam campaign, but it seems to be the brainchild of Nancy Cárdenas Peña, director for the National Latina Institute for Reproductive Justice in Texas. On Friday, Peña tweeted a link to the Texas Right to Life form with the comment, “Gosh, I wonder if they factored in people abusing the integrity of this system. Hmmm I hope ppl don’t abuse this! That would be terrible.” Peña’s IP address has since been blocked from submitting forms on the system, The Daily Dot reported.

One Reddit user posted their submission brainstorm: “A woman on a TV show my daughter was watching just mentioned that she got an abortion. Just a shame what the young people do these days. What happened to patriotism?” Another simply submitted, “Hail Satan.” I felt compelled to fight the good fight as well, so I sent Texas Right to Life a report stating, “I was in Texas once and a lot of people there looked like they had had abortions.”

In all seriousness, the abortion ban that will go into effect in Texas next month is a really big deal. Bhavik Kumar, a physician who provides abortions in Houston, told Insider that the law, “could open the door to a lot of frivolous lawsuits.” In May, a group of more than 20 abortion providers filed a lawsuit trying to prevent the ban from being enacted, stating that the law would disproportionately impact already underserved communities. They were, unfortunately, not successful, and unless goatse has a major impact on the Texas proponents of vigilante injustice, the law is still slated to be upheld.

More like this
California could ban nonconsensual condom removal. Why isn't this already illegal?
By Melissa Pandika
This anxiety study is a really passive-aggressive reminder that wealth equals happiness
By Ian Kumamoto
'Nine Perfect Strangers' is a deranged portrait of psychedelic wellness retreats
By Erin Qualey
Stay up to date