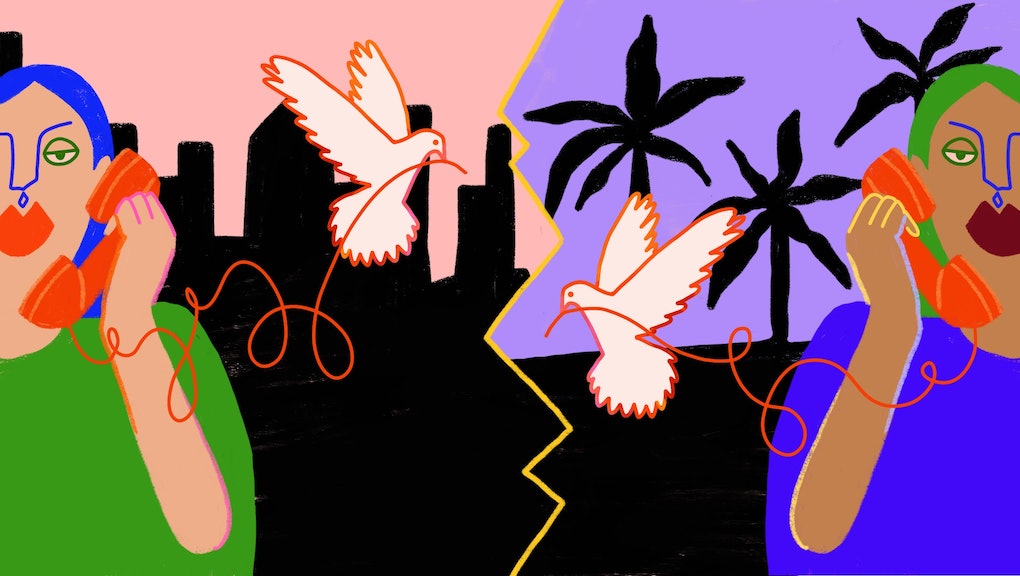 A therapist's guide to rekindling a broken friendship

From age 21 to roughly 26, my most significant relationship was with a friend we’ll call Maria. To say our lives were enmeshed is an understatement. We lived together, worked together, went to school together, and took vacations together. We fought like lovers and made up almost instantly. Our text chat was an endless feed of every amusing thought or minor irritation we experienced throughout the day. At some point, she even started receiving junk mail addressed to Maria Williamson, because marketers apparently got the idea that we had formed a civil union and gave her my last name.

I’m now 32 and living on the east coast, while Maria is in the midwest. We see each other when I’m in town, but that only happens about once a year, in non-COVID times. Our text chat still lights up on occasion, but it’s not the nonstop dialogue that it used to be.

Growing apart is a natural part of the friendship life cycle, but it’s not something we have to passively accept if we want our relationships to remain close. It can get a little more complex if the friendship falls apart over a conflict.

Even when one half of a friendship does something seemingly unforgivable (hooks up with your ex, for instance), it’s still possible to reconcile if both sides are willing to put in the work. And why not? Having high-quality friends around can reduce our stress, help us cope with reversals like breakups or job losses, and contribute to our overall happiness.

As we emerge from our pandemic pods and begin to see a wider range of people, the degree to which certain friendships have deteriorated may come as a surprise. According to Josh Hetherington, a licensed marriage and family therapist at the Chicago Center for Relationship Counseling, many people reacted to the trauma of the past year by drawing their closest friends closer, while allowing more distant relationships to atrophy. “I think everybody was really clinging to their inner circle during this time, and then the people that were on the next level out, people that you like and enjoy and that make your life rich, sort of didn’t make the cut,” says Hetherington.

If you didn’t bother checking in with a friend during the pandemic — and let's agree that many of were spread pretty thin, emotionally — they may be feeling a little neglected. It might feel daunting to reach out and ask them to grab a beer, but this shouldn’t deter you. It’s as simple as identifying the friendship you want to rekindle and expressing from the heart your desire to do so, Hetherington says. “My suggestion is to approach it from that place of ‘I've missed you!’ If you got a flattering message from somebody like that, it would probably be hard to have a defensive reaction,” he says.

But before reaching out, you may want to think about why you let the friendship slide in the first place. It’s possible the relationship wasn’t as satisfying as you remember, or that the other person had qualities that wore on you, causing a subconscious distancing response on your part. When we’re not in contact with someone for a long time, nostalgia for the best parts of the relationship can grow, crowding out more realistic memories of how it actually made us feel in the moment, according to New York City-based clinical psychologist Michael Brustein. “Often, people find that they’re not sure why they didn’t contact someone for awhile, and then when they do get together, the mystery kind of unravels,” he tells Mic. “Distance creates idealization.”

If you do decide to re-establish contact, Brustein agrees that the best way to do so is by authentically expressing your appreciation for the other person and acknowledging the role you played in the friendship’s slide. This could be as simple as texting, “Sorry I’ve been out of touch lately, but I’ve been thinking about you and I’d love to catch up soon.”

“It’s uncomfortable owning your part of it, and also expressing your vulnerability and desire to connect with them, but that’s really the best way to reignite it,” says Brustein. Of course, friendships that have been damaged by a falling out require a different approach to mend. It’s difficult to move forward with a friend when you’ve hurt each others’ feelings, but having a fight is not in itself a sign that the friendship is a bad one. In fact, it may mean just the opposite, and conflict may be a chance to make the friendship stronger than before.

“Conflict is a sign of depth. If you’re willing to have a fight with a friend, it means you’re close to that friend,” says Hetherington. “So there’s a lot to be gained from having the conflict, and then from repairing. Friendships get deeper through this tear-and-repair process.”

“Conflict is a sign of depth. If you’re willing to have a fight with a friend, it means you’re close to that friend."

After a “tear,” when enough time has passed to let anger subside, Hetherington advises approaching the friend with an apology as a sort of offering. In deciding what to include in your apology, consider your impact on your friend, and forget about your intent. Find one or two things that you honestly regret and say that you’re sorry, without any “buts.” For instance, instead of saying, “I’m sorry I offended you, but that wasn’t my intention,” you should simply say, “I realized what I did was wrong, it offended you and I’m sorry.”

“This isn’t a transactional quid-pro-quo,” says Hetherington. “They don’t have to forgive you right away, but the process of stepping to somebody with a really decent apology, that can really pave the way for forgiveness.”

When is it time to walk away instead of repairing? If a friend consistently puts you down, behaves abusively toward you, or leaves you feeling drained, it may be time to reconsider the relationship.

A lot of conflict between friends actually comes down to unrealistic expectations, Brustein says. Different friends play different roles in our lives, and those roles shift and change as we age. For instance, if you have a baby, your child-free friends may not be the best people for venting about your new-parent woes.

“I often compare it to basketball, where there's one Lebron James. If you have a friend who can play all the different positions like an all-star basketball player, that's great. But for the most part, people have certain strengths and weaknesses, and I think that often difficulties come from putting friends in roles that they're not best suited for,” says Brustein.

As we grow and move in different directions, it’s unrealistic and unfair to expect any one friend to meet all of your needs. For me, that means accepting that Maria’s new role in my life is just fine as it is. We still have fun when we see each other, and we have endless reminders of the many years we spent as each others’ Lebron James.

“OMG!” she texted me when I told her about this article. “My mom says I still get Maria Williamson mail.”