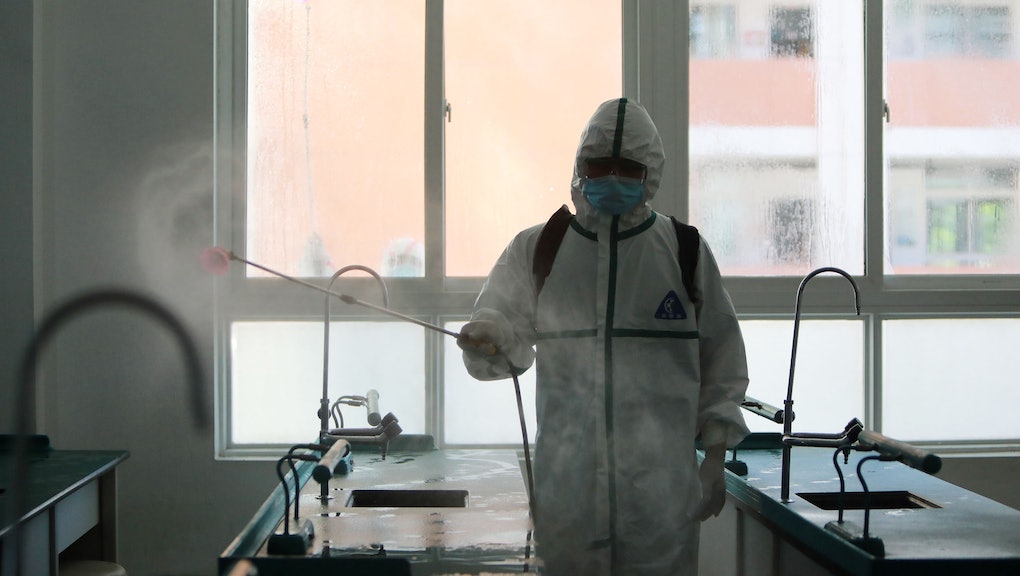 A vast majority of teachers are worried about returning to school, a new poll found

The debate about whether schools should reopen in the fall has been ongoing for months. Sending kids into crowded rooms in the midst of a pandemic seems like it's asking for trouble — and teachers share similar concerns. A new poll found that the majority of teachers are concerned about returning to school.

Put together by NPR/Ipsos, the teacher poll was conducted between July 21-24 and included 505 respondents, half of whom teach at low-income schools. The poll found that 82% of K-12 teachers are concerned about in-person teaching, and two-thirds would prefer to mostly do remote teaching.

Many teachers also expressed concerns over their own health and ability to access personal protective equipment. One Texas teacher, Robin Stauffer, told NPR that her district doesn't have custodial staff. Those employees were cut years ago, so teachers now clean their own classrooms.

"They don't supply hand sanitizer. They don't supply wipes. None of these supplies were ever given to us. You just use what you had or what teachers themselves purchased," Stauffer told the outlet. With that in mind, it's hard to see how a school would be able to keep up with the sanitation requirements needed to even approach safely reopening.

And yet, President Trump continues to push for schools to open. On Monday, Trump tweeted, "Cases up because of BIG testing! Much of our country is doing very well. Open the schools!" Trump's assertion that cases are rising in the U.S. solely because testing is more frequent is false, as experts have explained.

Trump continues to rely on the notion that high testing is behind the United States' nearly 5 million reported coronavirus cases. However, this has been repeatedly debunked. In June, a ProPublica analysis found that Trump's assertions aren't backed up by any data. And it's hard to see nearly 160,000 deaths as a country doing well no matter how much testing there is.

Ironically, the day before Trump tweeted that "much of our country is doing very well", Dr. Deborah Birx, who is the White House coronavirus task force coordinator, issued a warning to rural communities about coronavirus. In a change of tune from her earlier optimistic predictions, Birx said that the U.S. is "in a new phase" of the pandemic, with the virus being "extraordinarily widespread."

While much of the narrative around schools focuses on post-Labor Day openings, not everyone follows that schedule. In many Southern states, where the virus is surging, children have already been sent back to school — and the results aren't pretty. This week, Forbes covered a number of early-opening U.S. school districts battling coronavirus cases, including districts in Tennessee, Texas, and Mississippi.

George has also been particularly hard-hit. On the first day of school, a second grader tested positive for coronavirus, which meant the entire class had to quarantine. CBS News also reported that two suburban Atlanta school districts started up classes with mask-optional policies.

No matter how you cut it, reopening schools is a significant transmission risk. Business Insider reported that most large schools can expect coronavirus cases within a week. The problem isn't only kids catching coronavirus, either: In Georgia's largest school district, 260 employees tested positive or were otherwise exposed to coronavirus. Each child and employee exposed to the virus in turn risks exposing not only others at home, but whomever they come into contact with in their communities.

There have been some wins for districts that haven't reopened yet. Last month, Philadelphia officials dropped plans to bring kids back in the fall and decided to go fully remote. Chicago Public Schools, the nation's third-largest school system, decided to do the same after the Chicago Teachers Union threatened to strike.

More like this
So weird how Sean Hannity is super into the vaccine now
By Vanessa Taylor
Mississippi has the lowest vaccination rate in the country, and Facebook isn't helping
By Vanessa Taylor
Texas is about to enact a law that encourages people to snitch on abortion patients for cash
By Vanessa Taylor
Stay up to date